This blaster appeared out of nowhere, showing up on the shelf at Meijer supermarkets without a word. It’s an interesting blaster, to say the least, but a bit expensive for what you actually get. Even so, it maintains the fun effects and styling you’d expect from Zombie Strike; if you care about play value as much as performance, it might be worth a look.

The Contractor takes its main shape from a reciprocating saw, with other bits and pieces tacked on. In addition, it has several translucent pieces that light up during blaster operation (batteries are included). It’s not the most comfortable design, but it’s not horrible either. It’s just something you accept when you’re modeling after a real-life tool.

The prime is short and light, although you feel a bit of resistance when indexing the cylinder. There’s one tactical rail on top, should you choose to use an attachment. There are grooves in either side of the shell for reloading the cylinder.

As for the light and sound effects, there are two different sets of effects, depending on whether you prime the blaster. You “charge up” your shots and fire…or beep because you’re not primed.

The Contractor isn’t very special in this regard. You can fire off two darts per second, at least, but I only averaged 64fps. Given the price tag of $30, it’s not a good buy if performance is the focus. 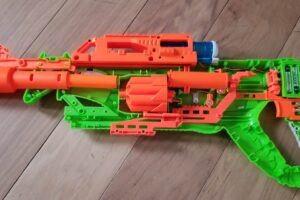 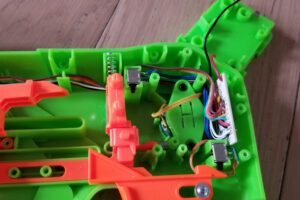 The Contractor’s insides consist of a simple revolver mechanism, a few switches, LEDs, speaker, and the associated circuitry. Nothing too special or new compared to past blasters.

If you’re just looking at performance, the Contractor isn’t the blaster for you. Eight shots for $30 is a bit underwhelming. If you’re into the special effects, however, that might tip the balance in its favor. I know I’d still run this for a Humans v Zombies game. Because why shouldn’t I make silly noises while tagging opponents?