The Aeon Pro may be out, but it’s not the only short dart firing pistol out there. A year and a half ago, a modder from Singapore by the name of Gavinfuzzy released the Spamf; it’s a conversion of the Nerf Accustrike Falconfire into a magazine-fed, short dart pistol. As a 3d printed conversion kit, it’s more expensive than the Aeon Pro (be it in money spent, or time printing). Even so, the more compact nature and lower starting velocity makes for a uniquely versatile blaster.

A shoutout to Silverfox Industries for printing this conversion kit; while I had already purchased files to print one myself, I was busy with the Vortex FDL; I also wanted something extremely well printed compared to my work.

I got all the printed parts and associated hardware in the mail two weeks after my order; perfectly reasonable, as I’m sure there’s a queue for various printed blasters. The parts were also very high quality; there were only two spots I could consider “errors”, and they were minor. It’s far better print quality than my own, and was worth the price. I stuck with the orange color of the blaster, but you can choose your own color scheme.

Installing the kit was fairly easy, following the instruction pictures on the shop page. I had a few Falconfires on hand, through thrifting and clearances, so that prerequisite was already taken care of.

It should be noted that the kit comes with an aluminum barrel and a breech o-ring meant for Worker darts. If you’re a fan of the Adventure Force Pro darts, you’ll need to replace them with 13mm ID barrel material and a slightly smaller o-ring. In my case, I had the replacement aluminum tubing on hand, and spare o-rings from a Worker sealed breech kit.

The blaster will accept both Talon and Katana short dart magazines, thanks to its unique retention mechanism. Considering the current Adventure Force short magazines have Katana dimensions (and the Ceda S and Gameface Prime are on the market, with Katana mags on shelves), that makes for a more handy blaster. If someone tosses you a spare magazine, chances are you can use it. 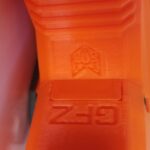 The Spamf, after assembly, averaged 89fps with Worker darts. Given the slightly wider barrel, Adventure Force short darts were inconsistent. However, since that is my main supply of short darts, I changed out the barrel and o-ring seal. After that, I was averaging 101fps. Just make sure you’re using darts with a good barrel fit, and you’ll get decent numbers; then you can pump them up with Retaliator-compatible replacement springs.

While not a scientific test, I could consistently hit a sheet of printing paper taped to my back fence from my back door. I need to measure how far that is, but it’s still encouraging.

In theory, you can do two darts per second. In practice, however, you’re plinking shots with a small blaster, and doing maybe one shot per second. Given the consistency and accuracy of a tuned Spamf, though, you shouldn’t need excessive rates of fire.

The Spamf is a fun blaster to use, be it close quarters, superstock wars, or Humans v Zombies. It’s more expensive than some recent product releases, but given its versatility and small size, it’s still a great buy. It’s easy to mod for performance, comfortable, and fun to use. Commercially available blasters like the Aeon Pro may exist, but there’s still a place for the more homemade options.