Xshot blasters have always been at the low end of the budget, yet they’ve consistently had good performance. In addition, they’ve had some nice looking blasters; the Bug Attack line comes to mind. Now, they’ve traded one sub-line for another – Dino Attack – and Xshot not only has great blasters, but some of the best-looking blasters, period. They’re beautiful, useful, and you should grab at least one, if not more.

I’m doing things slightly differently – I’ll be reviewing the whole line in one shot, so as to highlight the main differences from previous blasters. 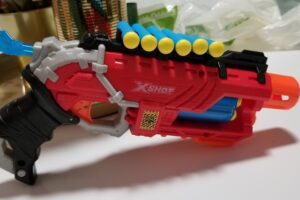 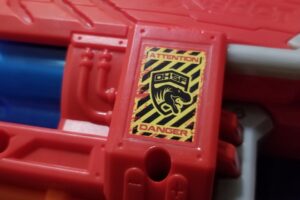 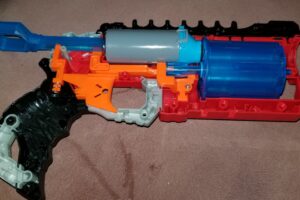 The basic pistol, the Dino Striker, is a reworked Reflex/Rapid Fire. As such, it has the expected performance (84fps average with the included darts) and the large, comfortable grip. Even more, it’s been improved with dart storage on top. The aesthetics are also top-notch, with claw marks, faux wood grain, and other features molded into the shell. Not to mention the fun stickers on the side (I guess there has to be a logo for Dino Hunters, after all).

The plunger tube is actually somewhat smaller than that in the Reflex. Even so, it performs well.

The Dino Striker comes with plenty of darts, as well as “dino egg” targets. 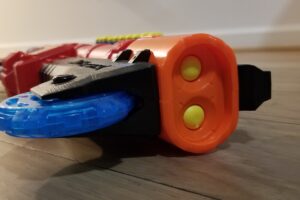 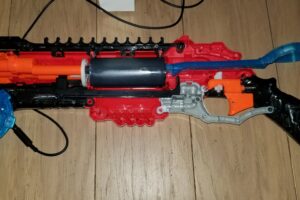 Whereas Bug Attack had the Eliminator, Dino Attack has the Claw Hunter. Again, it’s the same basic format as before, with one barrel firing after the other. It also has the improved aesthetics, including a “blade” at the front; it’s just a plastic wheel that spins, but it’s a nice touch for pretend play. The angled grip is comfortable and large enough for most hands.

You can store ten darts on top of the blaster. My blaster averaged 76fps – still respectable for a stock blaster. It has a fairly large plunger tube, but the barrel selector mechanism and dead space limits power.

You’ll also get dino egg targets and plenty of darts with the Claw Hunter.

Note that you can also find a two-pack with both blasters, available in stores like Ross. 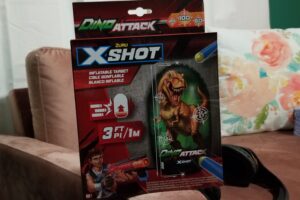 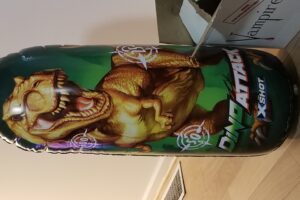 Lastly, Xshot has a 3′ tall T-Rex target (I found it on Amazon), that you can inflate and weigh down with water in the base. It’s exactly what you’d expect, and seems to hold up well to target practice, even with moderately modified blasters.

Helpfully, the package also comes with vinyl repair patches, in case the target gets punctured.

Am I really going to have to do a giant new dart test for this to stop?

Xshot knocks it out of the park with these blasters. They fire darts quite well. Even if they insist on citing an old irrelevant test when there are superior dart types on the market (seriously, can you drop the logo?).

Just as importantly, these blasters are some of the best looking ones I’ve seen from Zuru, with high quality construction and flourishes. They’ve even added dart storage to make your target shooting (or battling) easier. The inflatable target is nice, too.

You’ll find these blasters on sale in a variety of stores this year, from Ross to Amazon to Boscov’s to several other places. At the very least, grab the Dino Striker.