Zuru was able to get the Royale Meteors on Target shelves earlier this year, and now they’re carrying the Royale Orbit as well. Granted, it’s only online, and seems to go in and out of stock. Even so, it’s still a viable blaster like before, but it seems the improvements were to looks, not to function. If anything, you’re just paying extra for the gold paint scheme. 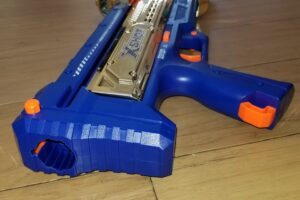 The new Orbit is largely the same as the old one, but with the updated colors. Still enough blue and orange to show it’s a toy, but enough gold to show that you paid the extra money for it! (I partially jest) Same handle, priming grip, etc. Due to it being largely the same, it’ll be easier to just read the old review.

Strangely, while the newer Meteors seemed to perform better than the old (in terms of consistency), this Orbit doesn’t improve on the old one. It averages about 95fps (near the old version I tested), and it still only travels 30-40′ before the rounds start to drop off. Looking down the barrel, my blaster’s hop-up tab still doesn’t extend far enough to actually be in the path of the ball, so no spin is imparted. As such, without modification, this Orbit is a close-range blaster, more so than other Rival-type blasters.

The insides remain the same.

The Royale Edition Orbit is largely the same as the old, just more expensive and with a shinier motif. Yes, the “gold” blaster looks nice, but it doesn’t seem to be an improvement, just slightly more expensive.

It does, however, have wider availability due to being at Target (or at least their website). So if you like a close-quarters blaster that can be reloaded, it’s worth a shot. Just make sure you’re the type of player that loads on the run.