The Xshot Chaos Orbit has been a neat, if not always viable, ball blaster. Initial production issues aside, it was a solid CQB blaster, with a 14 ball internal magazine and pump action. However, ineffective hop-up limited its usefulness.

With the brand new Faze Clan-branded variant (the Ragequit), the platform has finally matured. It feeds reliably, fires reliably, and has the ranges it’s been missing. All that, plus a clear shell? If you haven’t already added one to the arsenal, there isn’t a better time!

Like the Respawn, the Ragequit is made mostly of clear plastic. Internal parts, as well as some bits around the outside, are in red. It’s a neat look, and you can easily see how everything inside the blaster works. If anything, Faze Clan has good taste in colors.

The blaster comes with a few stickers on it already, for branding reasons. However, there’s a whole sheet of stickers for customizing the blaster, hiding beside the instructions.

The blaster operates the same as the Orbits that came before; you load the blaster by pulling back the magazine follower, and inserting rounds through the back of the blaster. Press the button on the stock to release the follower. Then, all you have to do is pump and shoot!

Of course, you have all the necessary bits, from the trigger lock and to the priming release button; the latter is there in case of jams, but I have yet to jam anything, be it with the included balls, Nerf Rival, or Adventure Force Tactical Strike rounds. 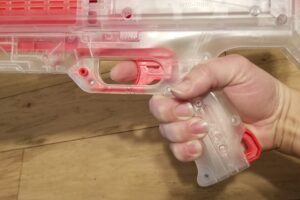 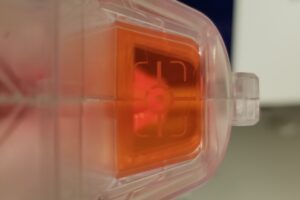 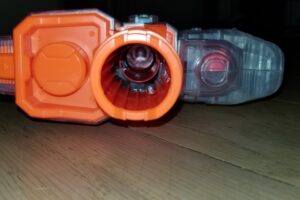 The blaster is comfortable to use. The main grip is large, open, and works well. The pump grip is a bit odd, with the hump in front of the blaster. I personally prefer a more textured or backward-angled grip. However, you can wrap your thumb around the front of the priming grip, so in the end it works. The stock is…basically useless for anyone with arms. Mainly, it just fills in the space around the reloading port.

The “sight” is more decorative than useful, due to the low profile. Seems Xshot realized that and colored the faux lens for style points, since we don’t use it anyway!

The Ragequit was a consistent performer in testing, averaging 94fps with the included ammo. A few shots did hit the advertised 100fps mark, so credit there. The blaster is easy to use and shoot, with one ball per second being easy to achieve.

Most importantly, however, is the flight of the ammo. THE HOP-UP ACTUALLY WORKS! I don’t know why it took this long, but the Ragequit does what a ball blaster should do, firing generally straight and not diving in random directions after the initial shot. It was one of the key issues keeping the original score down, since virtually any Rival-type blaster would be superior to use at distance. Not anymore!

Internals are essentially the same as before. I’m not going to take apart the clear blaster to show you the guts!

The Xshot Chaos Orbit always had potential. Now, with the FaZe Clan Ragequit, the platform has matured. It’s a beautiful, hard hitting blaster, and hopefully I’ll have the chance to take it out Saturday for some friendly blasting (and war footage, of course).

I do have to ask, though: Zuru, when are you finally releasing those speed loaders? Just like the Meteor/Respawn, the magazine loading port has a secondary catch. Don’t make me break down and just 3d print my own!