It’s not a comic movie without merchandise, and The Batman is no exception. We don’t always get foam-flinging tie-ins, but when we do, they’re worth a look.

The Gauntlet won’t be setting any performance records. Far from it! But for the kid who wants to be Batman during playtime, it’s a nifty addition to the collection.

The Batman Gauntlet comes with accessories for both arms. Wrist guards on either side hold three darts each. The wrist guard on the right side, however, shares straps with the arm-mounted blaster. The straps used for tightening the blaster are flexible plastic lengths with teeth on them. They’re not the most secure thing in the world, but generally speaking they do the job.

The included darts are indeed the same caliber as Nerf Elite darts, so you can use standard darts of any brand with the blaster.

The blaster unit itself has to go on the right arm due to its design. It primes with a pullback mechanism – simple enough. However, it sits in a retracted position until you hit a red paddle with the side of your hand. Once the unit springs forward for your “surprise” shot, the trigger button lines up with your thumb for firing. For adult hands, it can be a bit awkward to position everything just right; otherwise, you can have the trigger not line up, or be constantly hitting the large red paddle. For children’s hands, though, it’s easier to manage. I had to pass this off to a few neighborhood children to check. 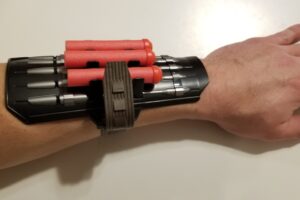 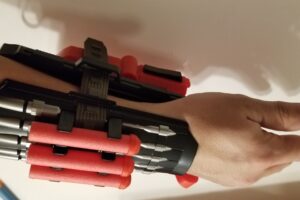 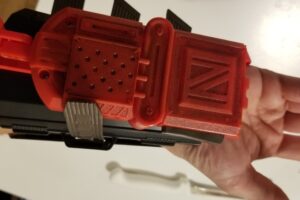 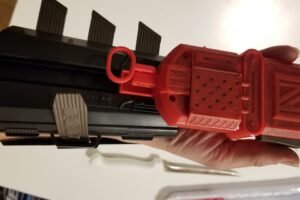 Overall, it’s quite fun to use, and I’ve spent plenty of time at home with it equipped, taking shots at targets whenever the mood strikes. Assuming there are other accessories or costume pieces, kids will enjoy fighting crime as Batman.

Of course, power isn’t the focus of a toy like this. Even so, don’t expect eye-popping ranges. With the included darts, I averaged a whopping 25fps! Nerf darts averaged around 28fps. Being the surprise blaster that it is, rate of fire is very slow. You could do maybe one shot every five seconds?

To be fair, we shouldn’t expect an arm-mounted cannon for only $20. 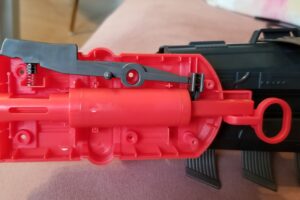 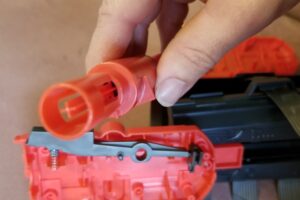 Once you open up the blaster, it’s easy to deduce why ranges are limited. The spring, while strong, powers a very small plunger tube. In addition, the effective barrel is maybe a quarter of an inch – after that, the barrel opens up and vents all the remaining air. It’s possible to put a sleeve around the barrel (~5/8″ diameter), but given the tiny air volume, I’m not sure it would make a difference.

The Batman Gauntlet is a fun kids’ toy, letting the little ones pretend they’re defending Gotham. Dart storage on both arms and a pop-out blaster makes for a fun time, even if you’re lucky to accurately hit something on the other side of the room. Ranges? Lucky for use, with a toy like this, we don’t need ranges.