After seeing the positive response to the gold Chaos blasters sent to various influencers last year, Zuru released their Chaos blaster again, this time with partly gold painted bodies. The Meteors in this “Royale Edition” are just now landing at Target in the US, in two-packs, and there seems to be more of a change than just paint. Old issues appear to have been fixed – even if it happens to come at the expense of the included ammo. And while it’s slightly more expensive…come on, they’re gold blasters!

We reviewed the original Meteor almost a year ago, and at least in our case, there were issues with the hop-up not doing anything, resulting in shot dropping long before they should. However, other people ended up having a different problem altogether with the Chaos blasters: HIRs not firing well, if at all. Turns out that not only were Zuru’s rounds slightly larger, but the tolerances for making the barrel weren’t tight enough. In those cases, the spring on the air safety valve could actually push balls forward in the barrel, cutting off the plunger tube from the barrel.

This time around, the blaster behaves differently. First, the balls are flying more like normal Rival blasters, with the balls floating from hop-up. Secondly, both HIRs and Chaos rounds fire (and see fairly tight groupings). However, the included balls fire slower than HIRs! It’s a strange result for a product claiming 100fps. What gives?

The inside largely looks the same.

It would appear that the ball manufacturing hasn’t changed, but the barrel is sized down slightly so as to take all rounds. As a result, HIRs (the most common ammo, seeing as Chaos rounds just aren’t as popular) see nearly the full fps claim, while the included rounds fire in the 80-90fps range. Still quite usable, of course, but an interesting solution. You can’t exactly start making smaller balls when so many previous blasters didn’t like them.

Even with this special edition, far more balls than necessary are included. Xshot has never been stingy about ammo, that’s for sure! 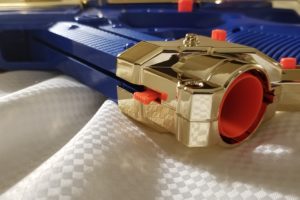 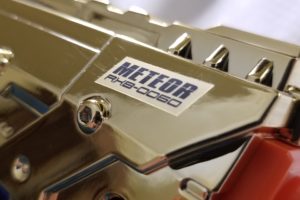 The Chaos Meteors look absolutely gorgeous with the partial gold covering. Of course, the large orange tip and the blue breaking up the look help ensure that it still clearly looks like a toy, but still. The blasters still come with sticker sheets for customizing the blaster your way. And operation, from reloading to firing, is still all the same.

Averaging 97fps with HIRs and 83fps with the included rounds is nothing to sneeze at, especially when the 97fps will generally be more relevant. You still only fire about one ball per second, but for a simple ball blasting sidearm, that’s all you need.

In the end, however, it’s the pretty shell that will lure you in. The Meteor is already solidly built. The gold paint is just the icing on the cake.