After many month of waiting, the Xshot Rival competitors from Toy Fair are reaching shelves. First up in the Chaos line is the Meteor. It’s a fun pistol, with a bit of extra ammo capacity and comparable velocities. But there’s one element – ball hop-up – that’s a bit off; it holds back the Meteor from being all it can be.

I found the Meteor at Rural King; it is also currently available at Family Dollar (in blue and white) as well as some regional chains – Amazon availability is expected for October. 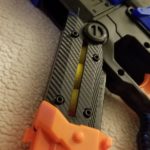 The Meteor shares a similar pistol format to the Kronos. However, instead of a curved, internal magazine that loads from a breech, the Meteor uses a different system. The magazine follower locks into place when pulled down. Then, balls can be pushed past a spring-loaded tab inside the follower. Pressing a button releases the follower, pushing the balls toward the breech. This setup does have a downside – turning the blaster upside down – but it also allows loading without needing to pull back the priming slide. It also allows for 6+1 total capacity.

A jam-clearing door sits on the side of the blaster, and it simply swings down when pulled out.

The blaster has all the other usual features of a ball blaster aimed at an older audience – thick, comfortable handle, safety switch, etc.

The plastic of the blaster doesn’t feel quite as thick as that in Nerf, but is generally shaped and contoured well enough that you don’t notice. There are plenty of textures for gripping the blaster, and the magazine has a “carbon fiber” look to it. It’s not quite Nerf, but it’s very nice to hold and use. Interestingly, a sticker sheet is included, so you can customize the look of your blaster. 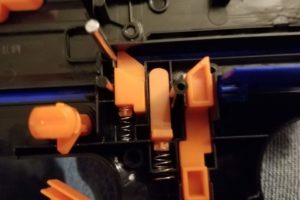 From left, the slide lock/reprime lock, the priming trigger lock (cannot fire while slide is in motion), and the catch. 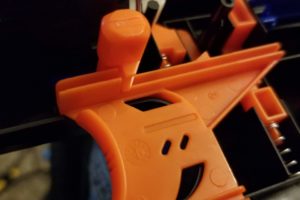 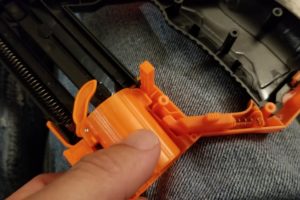 There's an extra, spring-loaded tab at the bottom of the blaster, with no current function. Potential magazine reloading/extension mechanism? 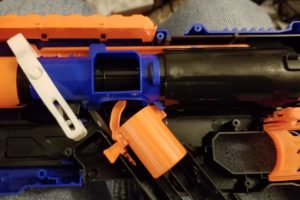 Blaster breech mechanism. Similar to that seen in a Helios.

The Meteor is relatively simple on the inside, but has a few features to note. First, the plunger is not only offset (the rod is not centered), but also wide and shaped to interact with various tabs and catches. As a result, the spring replacement potential is actually very limited; the springs have to be around 7/8″ wide on the inside, but not much more than 1″ wide overall to both fit the plunger rod and sit physically within the plunger tube. I am aware of at least one aftermarket spring already available, though.

Also notable is a spring loaded tab within the magazine that has no current function. It would appear to be able to hold some kind of loading tube for extended capacity, but nothing of that sort is currently available.

If you want to see a detailed teardown, see u/abquintic and his post over on Reddit; he will undoubtedly have good opinions on the blaster as well.

These are worthy of their own post, but until I can get a large sample of balls for a true brand v brand comparison, I’ll just say that the ammo seems comparable to Rival and Dart Zone ammo.

The balls measure roughly .90″ in diameter and 1.87g, but that’s based on a small sample size.

The Meteor is easy to use, priming and firing about once a second. My blaster was consistent with all ammo types, with shots measuring 94fps on average, putting it on par with other Rival pistols.

However, that isn’t the entire story. The Meteor, for some reason, does not fire as straight as other Rival blasters. For those who don’t know, most blasters and projectile launchers with spherical ammo have “hop-up” which induces spin on the ammo. This gives the ball lift, allowing it to travel consistently straight until it loses momentum.

The Meteor, on the other hand, tends to drop fairly soon after launch, at around 25-30′, curving downward with gravity. Which is strange, because there is a hop-up tab inside the barrel. I’m unsure of the circumstances at play here, but I feel like the ball is bouncing off the tab just as much as it’s spinning past it; the initial opening of the barrel after the breech is fairly wide. The ball then hits the orange barrel shroud and travels out relatively straight, but without the spin needed for maintain that trajectory. Again, this is speculation, but considering the ammo behavior, something has to be off inside the barrel. I also know of others who have observed the same behavior. And it occurs with all ammo, not just the new Xshot ammo.

It doesn’t make the blaster unusable; after all, you can fire it upwards at an angle. But every other ball blaster has been able to make this work, so the inability of this blaster stands out. You can’t just line up the sights and expect a reasonable shot at anything beyond immediate distances, and that’s disappointing.

The Xshot Chaos Meteor is a solid entry into the ball blaster market, with slightly more capacity than a Kronos, comparable velocities, and (possibly) a way to add extended capacity. However, the behavior of the ammo after launch makes this blaster less useful at distance than others on the market.