Sometimes, toys come along that you didn’t know you needed, until they appear on a shelf or at a Toy Fair. Such was the case with the Xshot Excel Crusher. A minigun-shaped blaster, with slamfire, for only $25? And that it works so well for what it is? It’s probably not the most *competitive* blaster, but in terms of sheer fun while performing, it’s hard to beat.

GET TO THE CHOPPA

For those of you wanting to relive your 80’s movie fantasies, the Crusher fits the bill. It comes in the usual Xshot shell format (blue, white, and orange panels that all screw together), with nice details in the molds. The main grip itself, while plain in shape, is textured perfectly for gripping, especially when holding at the hip. There are several sling points on the blaster for carrying it, but with how light it actually is, adding a sling is unnecessary unless you’re simply carrying it as extra equipment.

The shell is solid, nothing creaks, and it looks great. Can’t think of any real complaints there. As a company that really doesn’t paint their blasters, Zuru does manage to make their blasters look good.

The big attraction, of course, is the spinning barrel. Priming the blaster also adds energy to a spring-loaded gear system within, releasing it when the blaster fires and spinning the barrel. The effect is cute on single shots, but looks even better when firing in rapid succession. The ratcheting sound it makes grows on you – I found it annoying at first, then realized there has to be sound SOMEWHERE to go with this monstrosity.

The belt comes in several segments that need to be assembled beforehand. They can be taken back apart, although there’s enough plastic to make the entire operation hard to do. Parents will have to do it for little kids, but compared to being too weak and coming apart while running around, a strong connection is much preferred.

The belt is easy to insert into the blaster, thanks to a nifty addition at the bottom of the blaster. An orange slide can be pushed forward with the press of a button, disengaging the belt indexing mechanism. Once this is done, the belt can be inserted freely, or moved freely while in the blaster. This is especially handy for reloading the belt. Of course, if you had extra belts, you could feed those in, as well. I do not know if belts can be found separately in the future, but for now, they’ll just be from other Crushers.

The blaster, once loaded, is stupidly easy to operate. Pulling back on the front handle primes the blaster and advances the chain. You then move the handle back forward and pull the trigger to fire. The barrel spins on the firing.

In slamfire mode, you hold down the trigger the entire time, with the blaster firing each time you pull the handle, and the barrel spinning when the handle returns.

The Crusher shoots quite well, although Xshot darts are notoriously inaccurate. Dart averageds 80fps in my testing, so slightly heavier darts (Nerf, Dart Zone, etc) should expect averages in the high 70s. In addition, it was easy to maintain three darts per second while in slamfire. Firing at an angle. the 90′ range claims are indeed possible.

Being a hip-fire blaster, accuracy (outside of dart type) largely depends on platform familiarity, but given how light the blaster is, aiming isn’t hard compared to something like a Prometheus or Titan. 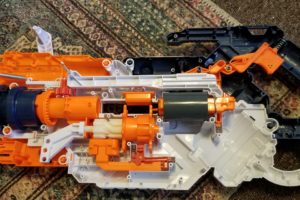 The Crusher fires darts with a large diameter plunger. It’s a short plunger stroke, but the spring is very strong. In addition, there are a lot of parts that can come out of alignment. I’ll do my best to include everything in the gallery.

The Crusher is the blaster I didn’t know I needed. It’s certainly not the most practical in comparison with something like a Stryfe or even a Turbo Advance, but it’s so much fun to use, and has the performance you want. And the spinning barrel never gets old. For $25, it’s hard to justify NOT getting one for your collection.