With the end of summer comes the beginning of a refresh of the main Nerf blaster line! Elite has been replaced by Elite 2.0, with an emphasis on black and metallic blue color schemes, simple assembly, and more attachment points. In the case of the Trio, it’s replacing the Triad, providing three quick shots in a pocket-sized platform. It fills the niche quite well, at a low price, even if it doesn’t quite seem to hit the 90ft claims on the box.

The most noticeable thing about the construction of the Elite 2.0 blasters so far is the lack of screws! Most metal (beyond necessary bits like main springs) was removed when the Alpha Strike line debuted, and Elite 2.0 seems to be following suit. The blaster body is made to have as few pieces as possible, snapped together tightly. Even the tactical rails eliminate the extra detent piece in favor of extra plastic ridges in the shell. It’ll make modification harder (though not impossible), but who are we kidding? Typically toy companies don’t make products for people to modify anyway…and while I acknowledge it when doing reviews, it’s not usually a focus or something I grade the blasters about. 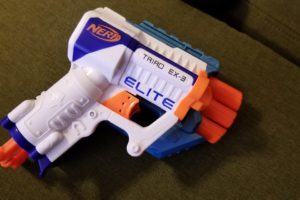 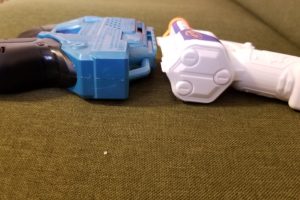 The Trio has a tiny bit of paint on one “Nerf” logo and “TRIO” logo; all other writing is simply molded into the plastic shell. The Triad’s triangular barrel setup is exchanged for three inline barrels. It, along with the large shell and need to mount a tactical rail, makes for a chunkier blaster than the original. It will still fit in a large pocket, of course.

Priming is still achieved with a Jolt-style prime. Pull down, fire the blaster, repeat until all three darts are expelled towards your target. The main handle is on the smaller side, but given the nature of the blaster, unavoidable. And for what it’s worth, the top of it is shaped nicely enough to be comfortable, even if part of your hand extends down below the handle.

There are two sling points on the blaster, if you wish to clip it to something.

While the smart AR setupresults in diminishing fps results, they didn’t actually decrease very much, from 68fps averages for the top barrel to 62fps for the bottom barrel. In addition, it’s easy to fire off all three shots in two seconds, and then to reload the blaster.

It should be noted that, in spite of box claims, I was unable to hit 90′ with any angled shots. One did come close, at 86′, but one would hope that a few shots would actually hit the number on the box…

The Trio shell pieces snap together and take some convincing to come apart without mangling the shell. Even so, it’s possible to open the blaster with a couple flathead screwdrivers providing leverage as you work your way around the blaster. Internally, it’s what you’d expect, with a large vertically mounted plunger and a smart AR assembly.

The very bottom of the handle, where the main spring rests, is made to snap in and not readily come undone. I have yet to be able to remove it without damaging anything. If progress is made in that regard, I’ll let you know if spring replacements are possible or helpful!

The Trio makes for a nice update to the Triad, although I’m sure opinions on the styling will vary from person to person. However, for the price, it still delivers the hits you’d expect – even if they don’t quite live up to the box claims. Still, if you’re a fan of the Nerf brand, it’s had to go wrong with this $8 purchase.