Xshot has made a solid effort to enter the ball blaster space with the Chaos line, even if the blasters aren’t quite as useful as their counterparts. Internal magazines with on-the-fly reloading, as well as ease of use and low cost, make blasters like the Orbit solid options for close range blasting. If you’re looking for consistency at range, however, you may need a different blaster – or a little extra effort to modify this one.

The Orbit is a rather compact blaster, comparable in size to the Rival Atlas, and with a similar layout. A pump grip sits at the front for priming, with a handle at the rear. The ball magazine sits along the top. The stock, while short for my tastes, does exist. The blaster comes with minimal decorations, opting instead to include a sticker sheet for making it to your own liking.

On the whole, the blaster feels solid, even if it does feel like thinner plastic than the Nerf counterparts. The handle is appropriately large and open, with enough texture to effectively grip, and the priming handle is easy to use.

The blaster loads from an internal magazine along the top side of the blaster. That, in turn, is loaded from the rear. The magazine follower can be pulled all the way back, and balls can be pushed past the spring-loaded tab in the middle. Pressing the orange button at the top of the stock releases the follower again.

There is a “sight” at the top of the blaster, but it’s small an not the most effective tool. The blaster also has a jam door on the left side.

Finally, there are both a trigger safety and a repriming lock, meant for dealing with jams (I have had none so far). 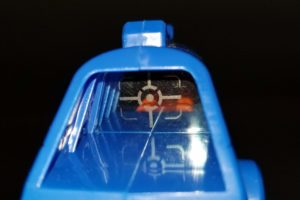 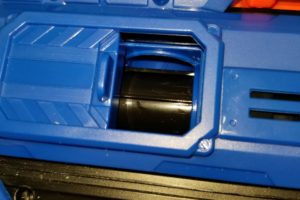 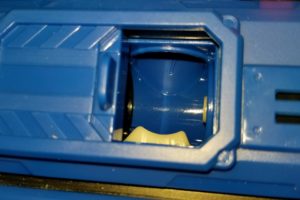 The Orbit is easy to use – once the magazine has been loaded, the player pulls back on the pump grip. This opens the breech, loads a ball from the magazine, and pulls back on the main spring. Pushing the grip forward then closes the breech for firing. While it’s not meant for this purpose, the user can use the repriming lock to pull back the grip again, loading a second ball into the breech (shooting two balls instead of one, but at lower velocities).

The Orbit, so far, has been highly consistent in initial velocity, with my blaster hitting 97fps on average. In addition, it’s also easy to shoot a ball every second, thanks to the smooth, fast priming motion.

The one area of concern, however, is ball flight. After 30-40 feet, the balls follow an inconsistent trajectory, as if there isn’t any hopup. This is confusing, as there does exist a hop-up tab in the barrel. Due to its small size, however, there is a possibility that (at least in my blaster), the ball isn’t making contact, or not for long enough. As such, this is a blaster that works far better in stock form at close range.

The sturdy internals on the Orbit actually make modification difficult. With a wide plunger rod, it’s actually hard to use any of the normal high-strength springs the Nerf Internet Community likes to stuff into blasters. Even so, I’m aware of some aftermarket springs existing (one comes from AK Blaster Mods, I believe). On the plus side, the system is easy to take apart, should you find a spring that will fit within the restrictions of the system.

One mod I will take note of appeared on Reddit, courtesy of u/Lynx53. In addition to a new spring, paintjob, and redoing the entire back of the blaster to take Rival mags, he also added a secondary hop-up flap. This simply ends up being a piece of a sheet of craft foam, stuck through a slot added to the orange barrel tip. Reportedly, it makes the ball trajectory much more consistent, and I will be doing it to mine as soon as possible. In the meantime, I’ll try to only fire at targets close to me.

The Xshot Chaos Orbit isn’t perfect. It does, however, bring some new things to the table for primary-type Rival blasters. Smooth pump action, an internal mag that’s easy to reload from a bag of balls, and a low price. It has consistent velocities, but it does lack in accuracy at distance. Until that’s fixed, however (whether by mod or manufacturer), it’s a blaster best used at close ranges.