The B.Va blaster has been an elusive thing to find – at first, a few samples of this presumably cancelled blaster were on Ebay. Then, some of them started appearing at Ross. Now, with pallets of them appearing at closeout stores like Ollie’s, it seems appropriate to finally review one, before they disappear again. Given the price and performance, get one while you can! 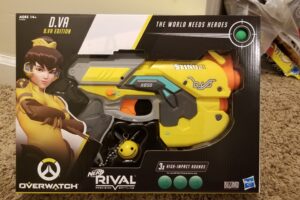 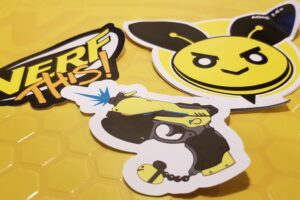 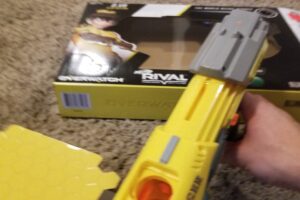 Yep, it’s the same blaster as before, just with new colors, a different charm, and new stickers in the box. There’s really not a lot more to add; the internals are the same. Performance is also about the same, although this one actually averaged 89fps out of the box. In firing it, the blaster does seem a bit friendlier when it comes to using the jam button. The force needed to pull the slide all the way back to pass the internal ratchet seems a bit less.

If you only care about performance, of course, blasters like the Kronos or Takedown are much better choices, especially considering ammo capacity. But when an unreleased blaster appears at clearance prices…it’s usually worth picking it up for the novelty, along with being a decent blaster.

We’ve already reviewed this blaster before (in the original colors), so that isn’t news. But when you could pay $10 instead of the original $30, and get it in a unique color scheme, it’s worth another look. Go ahead and grab one while you can; they won’t be around long!