It was announced earlier this month, and the reviewer samples are already being sent out (thanks, Dart Zone!). My Mk2 arrived via Fedex yesterday, giving me lots of time to test it, tear it down, and put it together again. And while the $80 price point seemed high at first glance, trying it out in an impromptu backyard war convinced me it was worth the money. Assuming, of course, you’re the type to use compact blasters or keep a secondary on your side.

Out of the Box 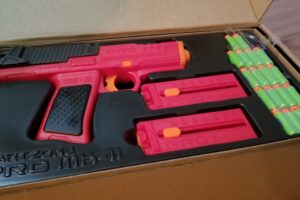 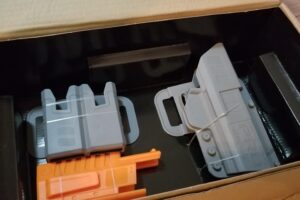 The blaster itself feels great in the hand, with the form being really close to that of real steel. That, of course, may be the reason there’s a large orange muzzle break that clips over the front. Beyond that, however, I can’t complain about how comfortable the blaster is to use. The priming slide has plenty of gripping area for handling the strong spring. Of course, not everyone is a fan of priming strong springs this way, but for me it works. The trigger pull is solid and returned with a normal spring, the safety sits above the trigger guard, and metal plates sit on either side of the grip. 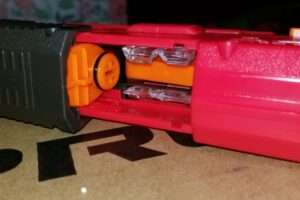 The internal magazine holds six darts, with a unique double-lipped top. I don’t know the reasoning, but I assume it helps retain the darts and prevent jams while the plunger tube moves back and forth. The stripper clips friction fit into the gap, allowing fast (and consistent) reloads. I’ve reloaded almost 100 times now, and have yet for the system to mess up in any way. I’m impressed.

The blaster has both a trigger safety and a priming safety.

The holsters for the blaster and clips fit well, and are a lovely inclusion.

The Mk2 averaged 127fps with the included bamboo darts, and 142fps with Adventure Force Pro darts. Rate of fire, at best, is two darts per second. Even so, the inclusion of the stripper clips makes reloading a breeze, and increases the endurance quite a bit.

Accuracy is superb, and it’s easy to hit targets at range with the Mk2.

The Mk2 manages to squeeze quite a lot inside the blaster. The moving plunger tube has an oval cross-section (32mm x 22mm) to help maximize the usable space. Combined with the roughly 45mm draw, that’s 24.88mL of volume. In addition, the spring is small but stiff. It’s a bit hard to find a spring in the right dimensions that’s also stronger, so I ended up putting a nylon spacer (5/8″OD x 1/2″ID x 3/8″) in front of the spring instead. It did increase velocities for bamboo and AF Pro darts to 137fps and 159fps, respectively. Whether that’s good for the long-term health of the blaster is another matter. I see this blaster filling a different role in low fps games and high fps games with close quarters; I’m not planning on using this as some kind of powerhouse primary.

Is the Mk2 for you? Maybe not. I know plenty of people that would prefer a larger blaster with more ammo capacity (like the SPAMF, or even Dart Zone’s own Aeon Pro). But I can’t think of another blaster this compact that works so well, is built so sturdy, and is this consistent. Whether it’s a backup blaster or your choice for running in head first, the Dart Zone Pro Mk2 won’t disappoint.