The beginning of October is fast approaching, and with it comes the release of the Aeon Pro at Walmart! Of course, the official release date hasn’t stopped it from popping up on shelves in both the US and (notably) Canada. In this case, I have a friend in Toronto to thank for sending me a blaster!

At its core, the Aeon Pro is the Nexus Pro, minus the stock, extended muzzle, and forward priming handle. Doing so, however, means having a competition-grade blaster at just $25. And with nearly identical performance, it’s hard to find something wrong with the platform, especially for people who just want to buy a blaster and join in on the fun.

Aeon on top, Nexus on bottom.

The Aeon Pro has the same core molding as the Nexus Pro. The magazine wells are identical, the grips are the same. The Aeon, though, drops the buffer tube and stock at the rear (as well as most of the front). Most of the top rail is also gone. You’re left with a Retaliator or Recon-sized pistol with a top priming slide. This isn’t, however, just a subtraction of features – with the top prime and open nature of the breech, you can actually reload magazines while they’re still inserted. It’s a nice option if you just want to slip in a dart or two instead of removing the magazine completely.

Like the Nexus Pro, the Aeon can take both full length and (with the adapter) half length magazines. However, it only ships with the short dart magazine and adapter – a clear indication of the direction of the Pro line, where previous blasters (including even the Dart Zone Pro series) shipped with full length mags and darts as well as short. Of course, the adapter can take third party magazines like Talons as well as the included half dart magazines. 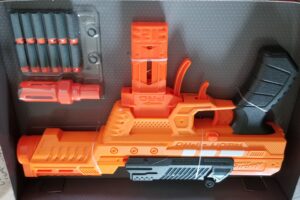 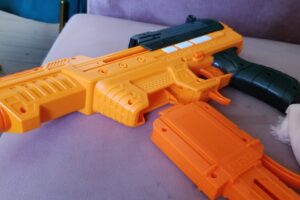 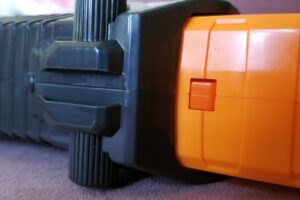 As with the Nexus, this blaster feels great in hand. It’s easy to grip the priming slide, the main handle is comfortable, and the front of the magazine well serves as an ample forward grip. However, given the relatively strong spring load, the top slide may be difficult to operate, even for some teenagers and adults. It will largely depend on the individual; it’s an unfortunate downside compared to having a pump grip.

Should it be required, a jam release button sits behind the top priming slide; simply depress it to enable re-opening the breech.

A faux barrel extension and two spare o-rings come in the package.

The Aeon Pro (at least in my case) is shooting in the same tier as the Nexus. Average dart velocities with the AF Pro half darts were 147fps! Rate of fire is just barely two darts per second, but more realistically it’s slightly below that if you take into account actually aiming. Again, the difference between a top prime and pump action. 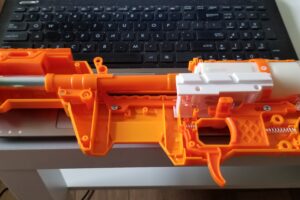 Everything on the inside 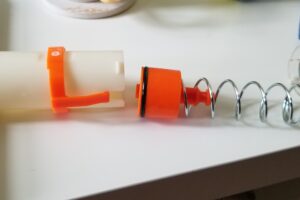 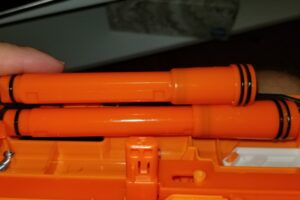 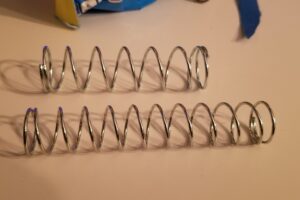 The Aeon Pro is quite easy to open and disassemble. There’s still a spring rest that’s easy to remove with just a twist. You just have to physically open the blaster first!

There are slight differences in the length of pieces in the breech compared to the Nexus Pro. Even so, you still have a little slop, which allows the chambering of both half and full length darts. In addition, the long buffer tube spring has been swapped out for a more traditional (but strong) spring. Due to the wide spring, we can either replace the spring (~31mm OD max) or nest another spring inside it. Maintaining the stock barrel but adding a Big Bad Bow spring, I’m now averaging 183fps. The prime is very tough, however. I know of several other people experimenting with Kronos springs. Of course, this doesn’t even take into account adding a longer barrel.

$25 for a hobby-grade pistol is hard to beat. The Aeon Pro might be slightly lacking in quality of life features compared to the Nexus Pro, but that comes with the platform. It still hits just as hard and feels great in hand, and would make for a great addition to the collection. If you prefer Retaliator-style blasters, try the Aeon Pro.