As a Stargate fan, I was excited to see the first version of the Rival Staff Blaster posted nearly a year ago. Under the circumstances, however, I didn’t get around to buying one once they became available. Several changes of address later, one of these showed up as a gift from my fiancee. My conclusion? I regret not getting one sooner, because it’s so much fun to use, surprisingly effective, and (in my opinion) has a bit more that can be done with it! 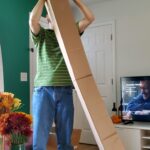 Impact 498 took the “blower + flywheels” concept in a somewhat different direction than the HIRricane and Proton Pack. Instead of simply looping tubing to maximize capacity, or using a hopper, he elected to stick with a long section of pipe and instead go heavy on the aesthetics. Incidentally, it does mean that shipping the entire thing requires a really long box and lots of padding. Which worked well for the most part – part of the blower fan casing did break in shipping, but with a replacement on the way after a quick message, it wasn’t much of an issue. One checkmark in the customer service column.

Fortunately, damage to the casing of the blower fan unit didn’t actually affect performance for testing, both at home and at a war.

Aside from the length of 1″ PVC, the staff blaster consists of three distinct units. The head, in addition to its decorative responsibilities, houses both a unique three-motor flywheel cage and a separate motor-driven feeder wheel. The rear of the blaster houses the blower fan for pushing the balls toward the head; it also has the loading port and cap for adding ammo. A small door with a thumbscrew contains the lipo battery (supplied by the user, of course).

The middle of the blaster has the control box, with a trigger on either side. Interestingly, Impact 498 opted to use cutouts in the 3d printed casing; pressing down slightly activates the internally mounted switches, and the thick plastic is springy enough to go back to its resting position when you let go. The rev trigger (blue) and firing trigger (red) being color coded helps a lot.

My staff holds 70+ balls in its entirety. Enough to do battle with, provided you aren’t trigger happy. Even so, it’s far too satisfying to just let it rip and send streams of Rival ammo downrange. This is one you have to be careful with!

How well this blaster fires continues to shock me. Using a 3S lipo, I’m hitting initial speeds of 162fps, and averages of 148fps! I’m also averaging around 11 balls per second, should I choose to just let things fly. I currently do not have a 2S battery handy (I can update those numbers later), but hopefully should be safe enough to use for Humans v Zombies.

Getting tags with this blaster was quite satisfying, and being a long stick didn’t make it too unwieldy. Then again, I also wasn’t stuck in a large group of people – in such cases, swinging a long, heavy object around may not be the best idea.

The versatility of this blaster design hasn’t escaped me. With everything mounted on 1″ PVC, it means that I can remove the head and other parts with the loosening of  screws and some plug disconnects. In theory, I could take things apart for more mobility (at full length, it barely fits in my car). I could also mount things to a shorter pipe. Which sounds like a bad thing…until you decide to hook that shorter pipe up to a Proton pack or similar device…

Why didn’t I get this blaster sooner? It’s absolutely amazing to use, war-worthy, and the aesthetics are a big plus for the sci-fi fan in me. Not only that, but the design means that I don’t necessarily have to keep it in this format for all time; I could drop or expand capacity at my leisure. Granted, if you’re stuck with crowds of people or tight spaces, it may not be the best choice of blaster. Even so, if you want a custom Rival blaster that not only works well, but looks great, consider getting a staff blaster.

You can buy one at Impact498’s Etsy shop!