Second in this year’s Dinosquad line is the Tricera-Blast. As you’d expect of a blaster based on a three-horned reptile, it has three shots. It’s also a hammer-primed blaster, with a flip-open barrel and storage stock. Can you buy objectively better blasters for $20? Of course. But for what it is, this blaster is a ton of fun, and has a bit of potential outside stock form.

The Tricera-Blast is a front-loading blaster with lots of plastic to move out of the way. Pushing the front horn forward and down flips down the “nose”, exposing the three barrels. In that sense, it’s like the Mega Tri-Break; the mechanism is cool for kid’s play, but otherwise has no real purpose in blaster operation. It does make the blaster long enough for the Triceratops motif, though!

The blaster comes with twelve darts, and storage space for all of them in the (kid-sized) stock. Even if the stock is too short, it’s easy for an adult to simply wield it like a pistol. Especially since it uses a hammer-priming mechanism. The sloped grip is comfortable to use, reloading (while a bit longer than necessary – again, the nose) is easy, and the shell is not only solid, but looks great.

Aiming isn’t perfect, as you’re simply trying to line up the horns as you would iron sights. Even so, it’s not to hard to figure out how to aim the blaster. To that end, the odd setup is forgivable.

There are no attachment points or rails, but there is a sling point, should you want to use it.

As a blaster using a “smart-AR”, the shots will decrease in power as you go down the barrels. The first barrel, in my testing, averaged 72fps. The second averaged 63fps, and the third got 48fps. The last barrel is a particularly noticeable dropoff, so I’d suggest reloading if you need to use full power.

Using the hammer prime, one dart per second was quite easy to achieve. 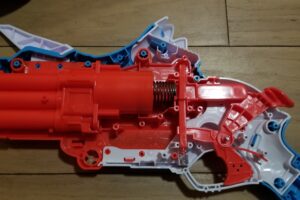 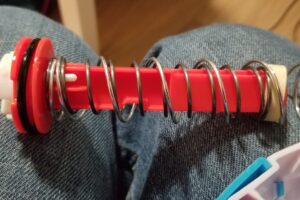 This Dinosquad blaster uses screws! You can actually take it apart!

Unlike other hammer-primed blasters (Hammershot, etc), you’re physically pulling back on a plunger rod and spring. The plunger tube has a large diameter, but a short draw. I ended up putting a spare spring over the stock spring (I believe it’s from a Maverick, but don’t quote me on that). Ignore the spacer in the picture, as I ended up ditching it.

With the extra spring, I ended up improving the first shot to 94fs, and the last shot to 78fps. It’s a much harder prime, but it makes the blaster usable at much greater distances.

Ultimately, $20 can buy lots of practical blasters, especially from other brands. But when you’re buying something for the cool theme and play factor, that’s a bit less of a concern. In that spirit, the Tricera-Blast is both fun to use and performs acceptably, even if three shots seems a bit low. It’s worth grabbing if you’re in any way a fan of the classic Nerf goofiness.