Fun things pop up unexpectedly when you’re searching for new blasters. On a recent trip, I stopped by one Walmart to find it already stocking some of the spring toys, including simple soakers. After seeing names on boxes I didn’t recognize, I started a quick progression of finding online entries, searching stores with inventory (whether it was actually on the shelf was another matter, as the actual shelf date is in a few weeks), and finally hitting paydirt.

The Hydro Burst does several things at once. It not only brings back useful triggers and pressurized chambers, but it also sets up a unique internal mechanism that could lead to more things down the road.

Oh, and it gets you really wet. Don’t be like me and let your fiancée soak you when it’s freezing outside!

The Hydro Burst is an amalgam, featuring several ideas tied together in a new way. First, as listed on the package, it’s pressurized, and with only one pump. That means it’s a spring-based system that sucks water in from a reservoir when you prime the plunger. We’ve seen spring piston blasters before (the Buzz Bee Splat Blaster comes to mind), and with the amount of water it’s using in each of the “14 Super Shots”, it’s of a size similar to (but not quite as large as) the Adventure Force Tsunami Drencher.

However, there’s a unique thing about the pump grip: you’re exerting force in both directions! This was unexpected, but in hindsight it does explain the unique shape of the grip. It’s easier to push when you have a large ridge at the front.

The blaster also has that Blitzfill cap that Prime Time Toys now includes everywhere. Makes it fairly easy to fill up the reservoir, whether you use a hose, a wide faucet, or a pool.

Finally…the blaster simply looks good. It has the shotgun vibe going for it, both in terms of shape and how it fires, and the molding, while not exceptional, is nice to look at. More importantly, it’s comfortable to grip and use.

The Hydro Burst puts out roughly 100mL per shot out of the 1450mL reservoir. That’s a tad more than the listed 48oz capacity (not to mention metric is so much easier to deal with in this case). In terms of stream behavior, it’s not perfect. It does hold together nicely, but due to the long plunger stroke and the drop in force from the spring, the tail end doesn’t go far. The end result firing up at an angle is a thick stream of water landing the entire length in front of you, with it breaking up but still reaching a foot past the advertised range. At close range, though, a target will get thoroughly soaked.

Expect a large shot that covers a large (if linear) area, as opposed to a small area far away. In that sense, as long as you’re lined up with the target, you’re not going to miss them by under or overshooting. And since there’s an actual trigger, aiming is a breeze without practice. 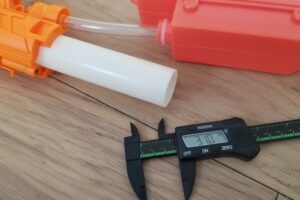 That's the ID of the tube. 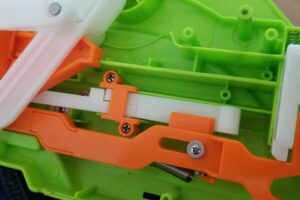 The safety mechanisms preventing you from firing until ready.

Now we see how the magic happens! Of course, you have the spring-loaded flap out front that seals off the chamber for filling, and pivots away when you pull the trigger. There are also the usual safeties in place preventing you from firing until you prime the blaster and move the pump forward. However, there’s an extra mechanism that makes all the difference.

How do you stuff a strong spring in there, but still make it usable for kids? You split up the application of force, and use mechanical advantage where you can. 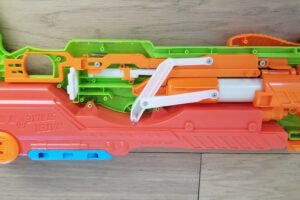 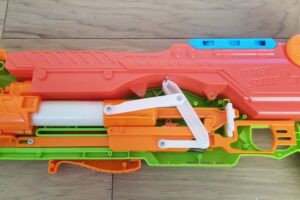 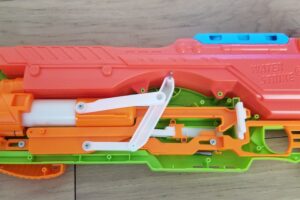 The white linkages and levers connect the pump to the spring rest, and actually move it backwards a bit while you’re priming. That means that while you’re moved the plunger all the way back and sucked in all your water, you haven’t compressed the spring the entire way. The forward motion then moves the spring rest forward; this is where the levers become most important. Now, for the hardest part of finally compressing the spring, you’ve done it over a large distance. This keeps the blaster manageable for children to use, in spite of the strong spring.

After seeing this mechanism, I’m wondering what could be done with it. Could a geared version (akin to priming Nerf Rival blasters) accomplish the same thing in less space? Could you choose a smaller nozzle diameter and push a small stream far? (Granted, you’d need an actual firing valve so that you aren’t forced to fire that stream until empty). How strong could the spring be, and if things were properly reinforced (and the spring pre-compressed), could you fire a glob of water even farther away? Could we have a “Tactical Water Strike” line for older kids, akin to the Nexus Pro and Aeon Pro over in dart blasters?

I would be lying if I said I didn’t want to see what happens when this is modified to fire darts instead of water! May need a new plunger seal, though, as water piston requirements lead to far more friction than those for dart blasters.

The Hydro Burst is a fun blaster to use. Admittedly, it’s more effective at close ranges, but that spring loaded chamber does allow you to throw a large amount of water across the entire range. However, the way it works is just as important, and could be a sign of better things to come. I’ll cross my fingers.

Oh, and it has a usable trigger, and feels like you’re using a water shotgun. That’s always a win in my book!