Here’s the other initial release from the Curve Shot line, aka the next generation of Knockout. It’s simpler to operate than its predecessor, and has plenty of ammo storage. On the flip side, it’s also five dollars more, and light enough that adding a barrel for curving rounds isn’t necessary. In any case, it still makes for a decent, low end ball blaster.

The comparisons are hard to deny. Aside from the extended ammo storage and the extended barrel, the rest of the blasters are quite similar. The plunger sits within the handle, and feeds into a pop-open breech. Once you load a round and close the breech, pull the trigger to fire.

However, the Flex is improved in operation. For one, you only have to pull down the plunger handle; there’s no longer a need to push it back up prior to firing. In addition, priming the blaster now automatically opens the breech, instead of being different motions. 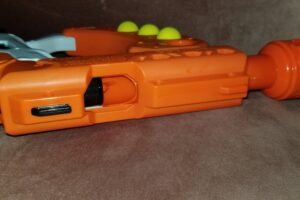 Like the Sideswipe, the Flex has a rotating hop-up tab at the front of the blaster. Unlike the Sideswipe, though, the Flex is small enough to easily turn in your hand if you want to fire left or right. That being said, if you find trying to fire sideways awkward (not to mention upside down), the mechanism has its appeal.

The handle is large, but comfortable, and there’s plenty of room for all of your fingers.

My Flex averaged 91fps, compared to the 90fps range claims. More importantly, thanks to the reduced number of steps, you can get a shot off every two seconds!

As for curving the shots, it does work, albeit with a gentle curve. As with the Sideswipe, I see the “down” setting as being the most useful, as it allows landing shots behind cover.

The layout of the internals are similar to the Knockout, but with some changes. Obviously, the plastic levers and doodads inside have been redesigned for the ease of operation. In addition, it’s far easier to take the plunger tube apart. Unfortunately, the plunger tube has a large gap in the side. The reasoning, of course, is to accelerate the plunger head quickly before it compresses the air at the end of the tube. For those of us who might want to convert this into, say, a mag-fed dart blaster, though, it may not be as effective.

The Flex is a nice evolution of the Knockout before it. One does question the necessity of adding a rotating hop-up tab to a small pistol, but it does work. Does the ease of use and ammo storage outweigh the extra $5? You decide.