In this week’s edition of “Dart Zone has posts, let’s wait for a critical mass”, we have two blasters announced on their blog, as well as new dart info!

Max Stryker – Target Gets In on Budget Performance 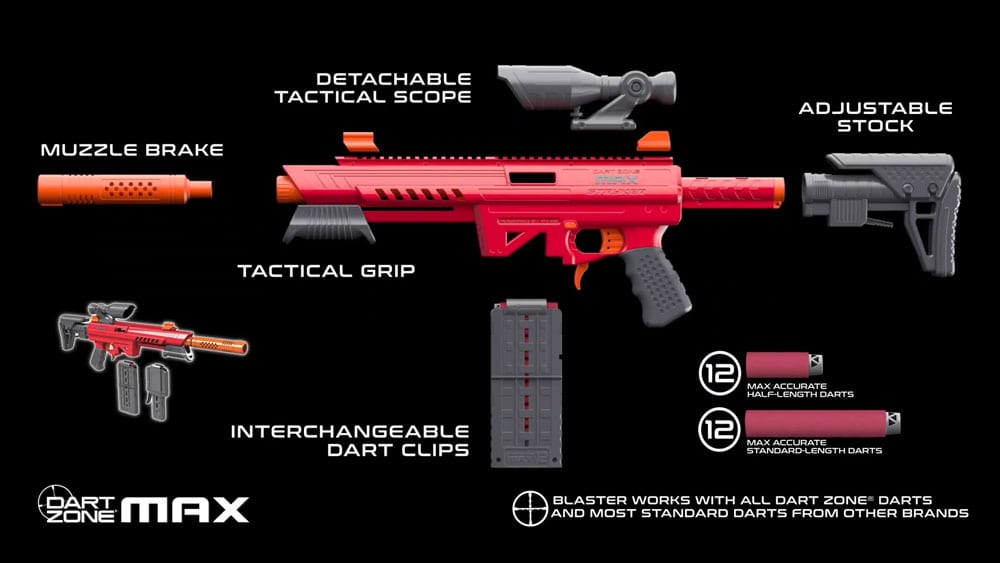 Clearly, the Adventure Force Pro blasters have made a splash in terms of sales; now Target is getting their own line with the $50 Max Stryker. It’s a new design, although I’m sure internally it’s very similar to the Nexus Pro.

The line also comes with its own flavor of Pro dart, with 150 packs retailing for $15 (and in red, to boot). No doubt these will go over well, as the back/grey foam darts are somewhat of a hassle to find and clean up after battle.

Speaking of darts, Prime Time Toys also has a new dart design for their regular blasters. As seen earlier in the imagery for the Tomahawk 60, the diamond tip darts will be featured with blasters coming this fall. I don’t see a particular reason for them to exist beyond variety (the existing Sureshot/Adventure Force Waffle darts are quite good already), but we’ll see when they come around.

Finally, we have a fun evolution of the dart hopper blaster to look at. The Matrixfire (already with a Walmart listing) has a 30-round ammo box mounted on the side…which makes me wonder how exactly it works. After all, the Commandfire, Destructor, and Sportsman all had their hoppers directly in line with the propulsion system.

In any case, it’s fully automatic, claiming three darts per second and 80ft ranges. It also looks quite good, and should be fun for running and gunning, both for casual and serious players.