Author’s note: all of the Hyper blasters were sent for free by Hasbro for review. Thanks, guys!

The introduction of a new blaster line almost always has a “must-have” or flagship blaster. NStrike Elite had the Hailfire. Mega debuted with the Centurion. Even Rival saw an initial focus on the Zeus, and followed the progression of electronic blasters that came after.

Hyper has the Mach-100 filling that role. It’s the size and shape of a Rival Perses. Unfortunately, however, the Perses (even with less ammo) is preferable.

The Mach-100, at $70, represents the top of the line for the debut. It holds 100 Hyper rounds (although only shipping with 80) and runs on six D batteries. Yep, D batteries. Not only does that add to the final cost, but it also makes for a heavier blaster and slower performance. Sadly, $70 was the price point to reach, so full ammo and a rechargeable battery got the boot. As with the other Hyper blasters, safety glasses are included.

No dogs were harmed in the making of these pictures!

Like the rest of the line, the Mach-100 features a fine paintjob, combining a 90s vibe with carbon fiber-style molding. The main handle is quite comfortable; the body of the handle is slightly below that of the Perses, but is paired with responsive triggers that feel great to use. The front grip/battery tray is a natural place to put your offhand, and helps with bearing the weight of the batteries.

There are several rails on the blaster, allowing convenient ammo storage for topping off the hopper. The hopper itself has a simple door to open, without any electronic locks (i.e. you could fire with it open if you had to).

As expected for a full-auto ball blaster, you have both an agitation mechanism and a feed belt. The former is an absolute necessity, given the tackiness of the ammo. It’s also quite loud, and sounds terrible to use. The Nemesis and Prometheus sounded far better in that regard.

There is no hop-up tab to speak of, making for a noticeable difference in ammo behavior. Trying to hit targets at a distance means actually aiming up with the blaster. It’s quite an odd feeling after using Rival for so long, where the backspin helped make for relatively straight and level shots.

The Mach-100, in my testing, averaged 108fps, just shy of the advertised 110fps. However, this was on single shots; fully automatic fire bogs down the flywheel motors quite a bit. Rate of fire, meanwhile, averaged between 3 and 4 balls per second, depending on how well the ammo feeds. You get inconsistent spurts of heavy fire, followed by gaps.

The Mach-100, while fun to use in a war, came with issues. The lack of hop-up led not only to needing to angle the blaster for distant shots (unlike Rival), but also to inaccuracy. Sure, if you fire enough rounds, you’ll get a hit. But beyond close range, that just gets annoying.

In addition, the spin-up time on the flywheels is awful. Having to press the rev trigger three seconds before you want to fire is far from ideal.

Finally, the agitation system sounds horrible and has a tendency to jam…which defeats the purpose of having an agitation system. It doesn’t happen all the time, but the tackiness of the rounds can lead to a mass of ammo moving forward within the hopper, and not always lining up with the feeding system. If you’re running around, you probably won’t see this issue often. If you need to hold a point…prepare to shake your heavy blaster. 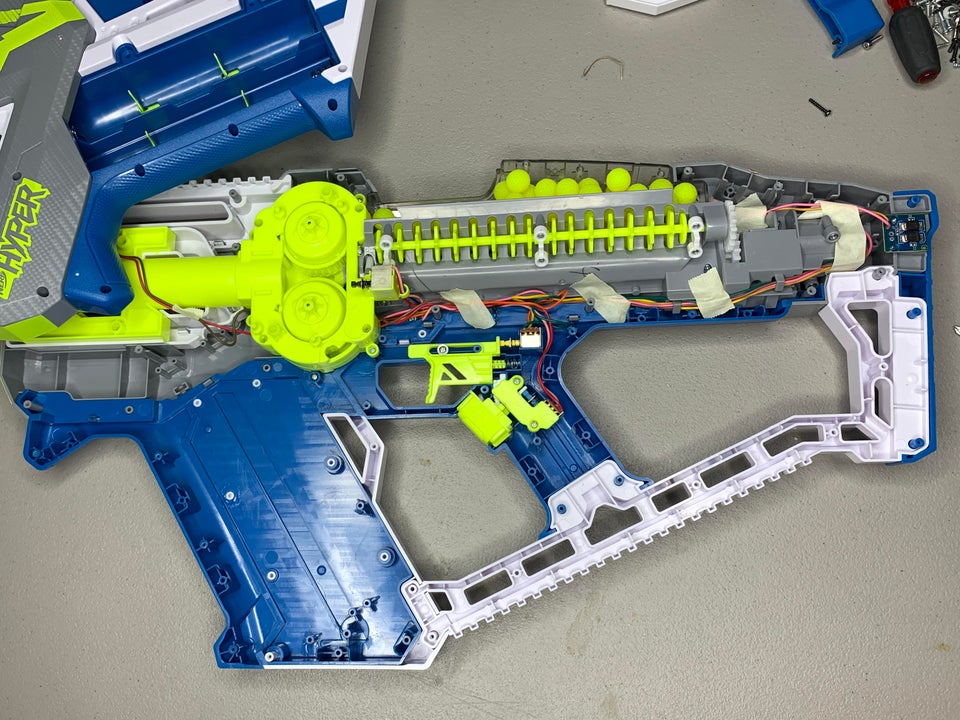 nce again, I’m simply using a picture posted by American Foam; big thanks to him being able to test quite a few things this past week.

The insides are what you’d expect, with large motors and flywheels, and an agitator system like you’d see in the Nemesis (but for Hyper).

Seeing the shell without the battery tray, one does wonder how the blaster would look with that section completely removed…

The Mach-100 is supposed to be the flagship of the Hyper line, but it has many flaws holding it back. Accuracy issues, jams, and slow response times all raise their heads, and the agitator just sounds awful trying to move the tacky rounds. I sincerely hope the next Hyper flywheeler fixes some of these issues. More accurately, I would have preferred a few months of delay for the holidays (allowing for refinement) than to wait on a different flywheel blaster.

It’s usable, sure, but far from ideal, and you should at least wait for a sale if you’re interested in getting it.