Thursday and Friday, the first beta appearance of Nerf Strike went live. I got a chance to try out the game in its current state, and was thoroughly entertained; even so, it’s clear that we have a long way to go before official release.

Being a game within the Roblox ecosystem, there were people playing on Xbox and mobile, as well as PC. I did try to play mobile on Thursday night, but quickly found out how difficult it seemed to control (seemed to shoot automatically every time I moved where I was looking). Granted, it could be a case of fat fingers. But mobile is also NOT the ideal platform for first person shooters, so I’m going to ignore that entirely.

Friday evening, I played on PC. 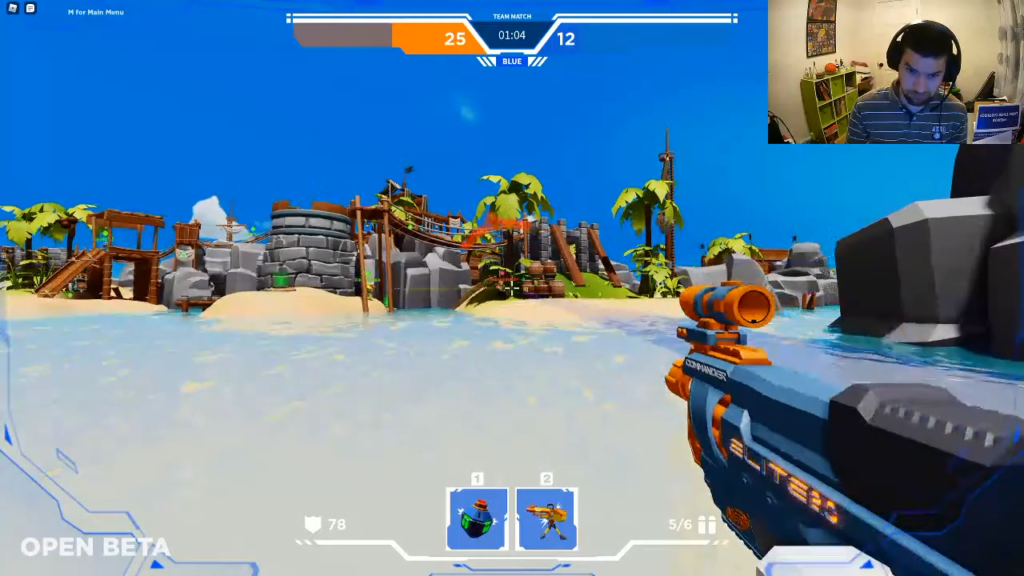 The open beta this time around was focused simply on the basic mechanics. When you join, you start with a menu screen for customizing loadouts, and a “DEPLOY” button for entering the game. For this beta, you had three Elite 2.0 blasters: the Commander, Warden, and Turbine (this one you could unlock with in-game earned currency). You had abilities with cooldowns, the Dart Device (a grenade) and a turret (an automated Vulcan). Finally, you could pick and choose colors on the equipment. 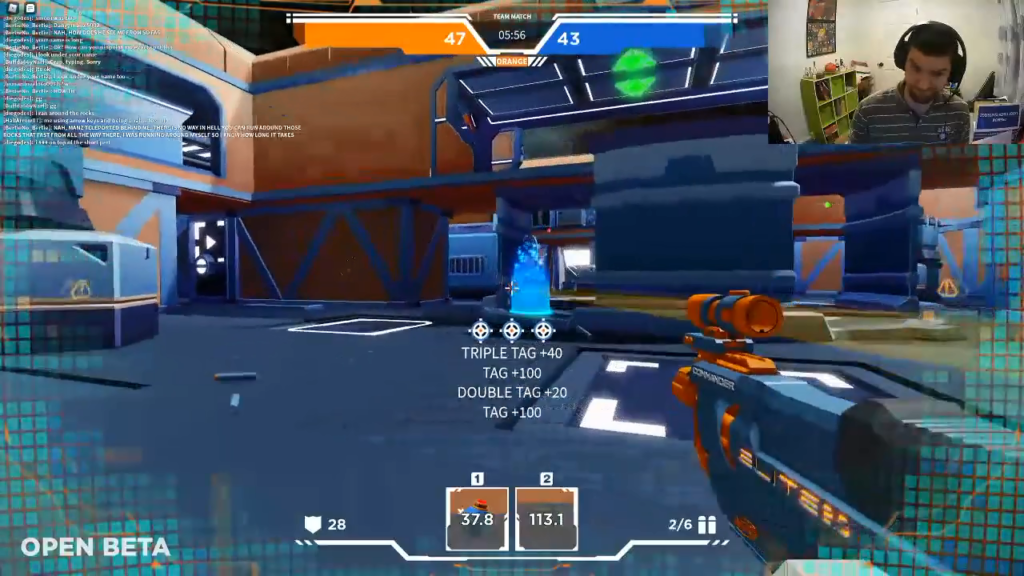 In-game, the Commander is actually a slow full-auto (due to having slam-fire in real life?), while the Warden fires all eight darts at once. The Turbine has a faster full auto, but seems to have lower stopping power. Of course, being an FPS, the darts have to go straight, unlike real life Elite darts, but there’s still some ammo drop due to gravity.

I ended up using the Commander most of the time, as it had a good balance of rate of fire and stopping power. The Warden simply seemed annoying, with the shotgun spread being inconsistent – sometimes people would miss at point blank range, other times they’d get multiple hits from across the maps.

It’s the initial beta, though, so weapon balance will be adjusted, especially as new things are added.

Movement felt somewhat slow, even with running. I also couldn’t find a screen showing the controls, although I figured it out. (Hopefully you can customize in the future). 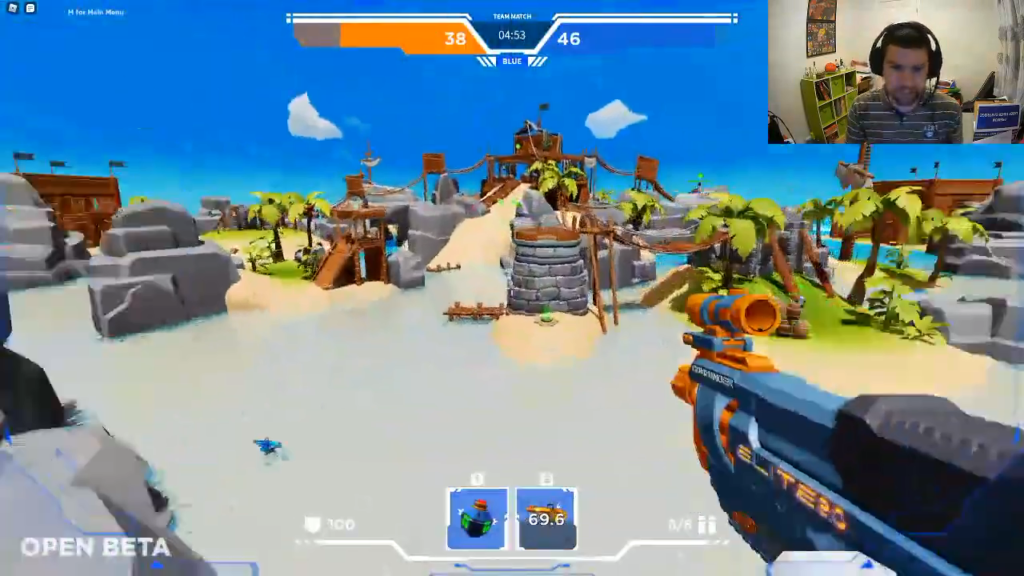 There were only two maps; the first had two pirate ships as spawn points with islands and structures between. This map I found especially fun, as you could use the cannons and lift pads to quickly jump into and around the map. The other felt like a Halo arena, with two levels within a spaceship-like setting. This map had separate spawn areas, sealed off with translucent shields of your team’s color that blocked darts. Sadly, I did see some abuse of this (people stepping out, shooting, then retreating), and could imagine scenarios where a team in the lead could simply turtle and run out the clock. I’d suggest having some sort of timer for exiting the spawn area, and blocking re-entry. 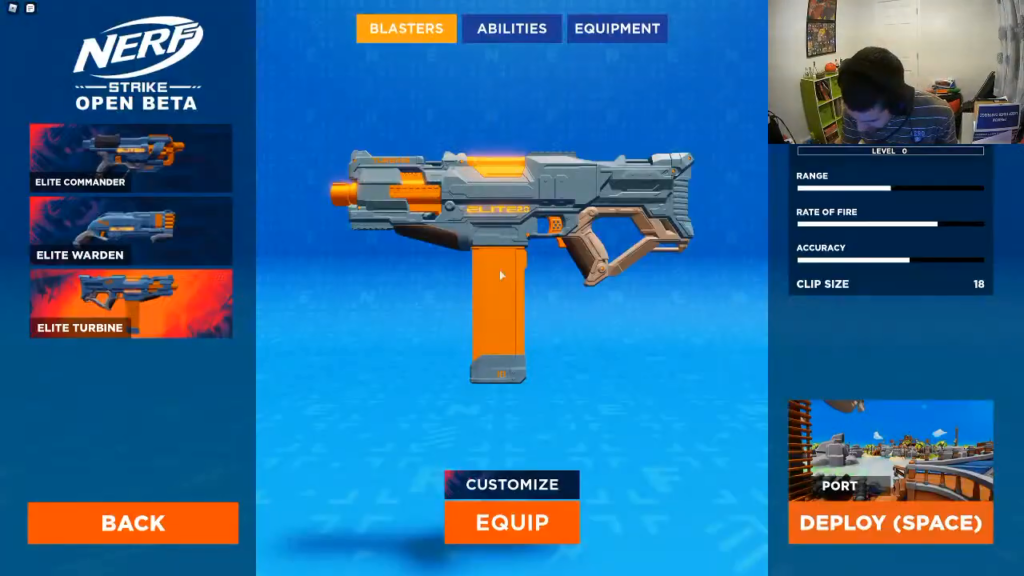 Seriously, when you get tagged, it shows the person that killed you, then kicks you back to the menu screen. I’d much rather be able to jump immediately back in, with a button press during the kill cam sending me back to the menu to make changes.

The beta ended early (it was originally supposed to last through today), but I imagine it was great for the developers. Betas help to find bugs, get feedback, and make sure the basics are all working. There should be more betas in the future, so stay tuned!