Few things in the hobby space, especially when it comes to Rival, are as iconic as the Proton Pack. More than five years ago, Out of Darts made the first one, with several revisions (and other iconic interpretations) since then.

Now, at last, they’re available for purchase from outofdarts.com! And if Rival is in any way useful to you (and you have the ammo for it), it’s some of the best money you’ll ever spend! 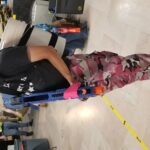 The distinct advantage of Rival over darts has always been capacity; especially with blasters like the Nemesis and Prometheus, you could just throw a hopper onto a blaster, provide a method of agitation, and let loose a cloud of foam. Nerf Hyper (coming later this year) seems to want to double down on that premise with smaller rounds. Even so, Rival has been around so many years that it won’t be disappearing anytime soon.

The Proton Pack (named after that Ghostbusters implement us nerds are fond of) takes that idea a step farther, putting the hopper on your back. An agitation and blower system feeds balls through a hose to the blaster itself. At this point, assuming everything works, you’re limited simply by how many balls you can carry on your back (and possibly how much that impairs your movement).

The Basics of the Pack

There are two main options for the Proton Pack: a hardware kit (get a box of printed parts, fasteners, etc. and assemble yourself), and a prebuilt kit (for $50 more). Various other add-ons are available, depending on how you want to store your rounds and what blaster you plan on plugging into the feed hose. In my case, I bought the hardware kit with a magazine adapter for the Nerf Rival Khaos, and elected to get a flat-plate ring for making the pack on my own. Note that the capacity and rate of fire claims are with the default 1 gallon plastic container.

Mounting solutions, however, are the user’s responsibility. A backpack is the sensible default, and the online assembly instructions mentions how to make an air input in such a restricted environment.

As someone who’s done plenty of Nerf modding, soldering, and tinkering, I was perfectly fine with assembling the unit myself. Mount the motors, solder the main board and the various cables, and just do everything slowly and methodically.

The board at the center of the project (and the reason for much delay) is quite important. In addition to housing the various connection points and circuitry, it allows everything to be controlled by the pack itself. It detects when you draw power by revving up your blaster, and responds by turning on the blower fan and the agitation motor. There is a notable lack of on/off switch in the design…but frankly, I’m fine just taking off the battery door and disconnecting power when I’m done using it.

On the topic of batteries, the unit needs a 3s lipo, and one with the capacity and/or current output to supply up to five motors (three motors for full-auto blasters, plus the brushless blower fan motor and the high-torque agitator motor). You can buy one from Out of Darts that fits both these specs, and the space provided in the pack. I, of course, decided I wanted to use a 4000mAh brick, and made several cuts and additions within the unit to accommodate it. Why shouldn’t I be able to use the pack for several missions of HvZ on a single charge? 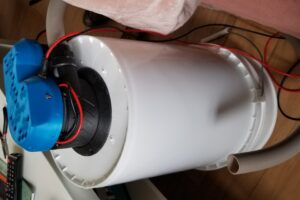 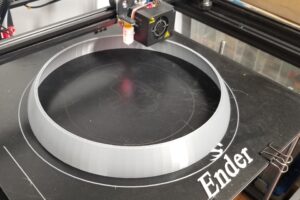 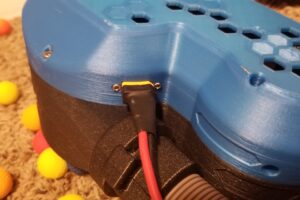 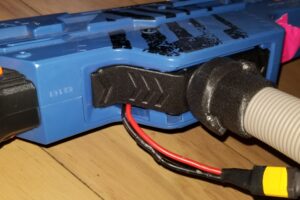 My largest problem, it turned out, was my choice of ball storage. Due to my job, I basically have access to free 5 gallon and 6.5 gallon buckets (you can also easily find backpack straps for buckets online). However, those are also made of High Density Polyethylene, or HDPE. HDPE is NOT very friendly when it comes to adhesives or bonding. After using the flat-plate ring as a stencil and cutting a hole in the bottom of a 6.5 gallon bucket, I did some sanding. Then, after using a two-part plastic bonder (an activator, then a cyanoacrylate adhesive), I let the bucket and ring sit for a day. I initially had extra mechanical fasteners, but removed those once it was clear the adhesive worked.

I then modified my Khaos, rewiring the blaster and hooking it up to the feed hose and power supply line. Finally, I printed a conical ramp for the bottom of the bucket. It does reduce capacity, but it also helps guide balls toward the central hole, instead of getting stuck around the edges.

This past weekend, I spend two rounds using the Proton Pack, although I didn’t fire a lot of balls through it (I may love the capacity, but think that full-auto still tends to be excessive in Nerf). The first mission saw some difficulties; often I’d be revving the Khaos, but no rounds would feed. That brings us to the first of two error I made: not turning up the blower fan speed on the board.

Once I made that adjustment in the briefing area, the pack functioned far better, albeit not perfectly. Which leads me to error #2: not sealing everything up.

In my rush to get things done, I had not fully sealed the area between the flat-plate ring and the bucket, so lots of air was simply escaping. I used some silicone adhesive as caulk to fill in around the edges, both inside and outside the ring, and that fixed the issue.

The website claims 20 balls/per second. That, of course, assumes you have a full-auto blaster that can handle that output, and that you used the “stock” setup for the pack. I’m good on the first count. However, a 6.5 gallon bucket is a much larger space to pressurize than a 1 gallon container. Even so, being able to spit out 10 balls/second is nothing to sneeze at, especially when my capacity is well over 2000 rounds.

Also, the wife had plenty of fun shooting me with it.

It requires some tinkering with the existing settings, but otherwise Out of Darts’ Proton Pack is as amazing as I expected. Large capacity, high rate of fire, and the ability to dominate a local area during battle? You should sign up for one. Well, at least whenever round two of production starts. They’re currently sold out and completing the first batch.

Just go into it knowing you’ll need to either mod a blaster to use with it, or buy one (Out of Darts’ Jupiter works quite well…)