Some things fly under the radar. Thanks to the pandemic of the past year, much has been lost in terms of advertising new products, showing off samples at Toy Fairs, etc. That includes soakers, most of which are manual anyway. In the case of last year’s soakers, that issue was compounded by a recall of the XP20 and XP30 over stickers containing lead – never good optics.

This year, Hasbro quietly rereleased the line with the -AP (Air Pressure) tag at the end, and also added another rerelease to the line: the reimagined Super Soaker 50 from 2009! How’s it perform? Quite well, actually. Enough to to be the best thing in their line…after 12+ years. 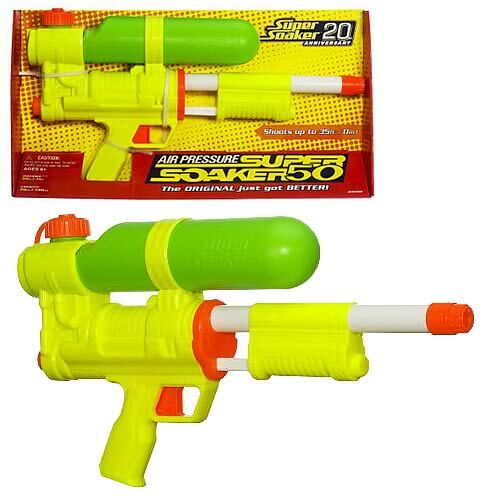 For those who don’t keep track, the Super Soaker 50 was the first modern soaker. It originally appeared in 1989 as the Power Drencher, then renamed in following years. After several color iterations, it disappeared from shelves. Then, it was redesigned and rereleased in an anniversary edition in 2009.

Whereas the original operated with a pinch trigger (squeezing the plastic feed line itself) and had a removable reservoir, the redesigned version opted for a ball valve and a nonremovable tank.

This version also appeared briefly as the Supreme Super Soaker.

The XP50-AP maintains the colorful reimagining from 2009, even if the molding doesn’t match up with last year’s aesthetic. But it’s close enough for Hasbro to be able to break out the molds and make more of them to fill shelves.

The pump grip is simple, but has just enough shape to it to make pumping easy, even when wet. The main grip is a bit blocky, but adequate, and it’s large enough for most hands. The trigger pull is smooth, and pumping and firing doesn’t feel like a chore in any way.

The reservoir is advertised as holding 24oz. You could possibly push 25oz, but that’s pushing it due to the shape of the tank leaving a small part unfilled (assuming you aren’t just dunking the entire blaster in water).

As for firing, it’s rather impressive. There are no range claims (the 2009 version claimed 35′), but I got up to 42′ in testing! Granted, after pumping up the reservoir each time, I only got three shots before needing to refill. However, those shots had quite a bit of lasting power. More importantly, it’s all stored energy, so you can actually aim the blaster and have the stream of water hit at that distance!

The XP50-AP is essentially unchanged from the original mold, and that includes the innards. The pump extends all the way back, all the internal tubing is hard plastic, and a ball valve releases the pressurized water. At this point, I could complain about wanting more capacity, or a larger, snappier valve…but given recent soaker trends, I’m happy just to be getting a 12+ year old blaster.

If you didn’t catch the original 2009 release, grab this one. $15 gets you great performance, power you can aim, and plenty of range. Reloading isn’t as fast as some of the other competing blasters on shelves. Even so, it’s hard to beat being able to pull a trigger and blast someone with a pressurized stream.