If you’re at all familiar with online influencers, you’ve probably heard of Ryan’s World; last I checked, Ryan Kaji ranked as the highest-paid Youtube star, making $30 million dollars. With licensing deals on toys, clothes, video games, and more, it was only a matter of time before “older” kids’ toys entered the fray, and blasters are a large market.

I managed to find all the blasters in the line at local Target stores (this line is exclusive there in the US). While I wasn’t expecting much, It turns out the line is actually quite good for the price, assuming you either love or don’t mind the Ryan motif present on everything. In the case of the Ryan vs Combo Panda kit, a pair of high-performing revolvers for $20 is nothing to sneeze at! 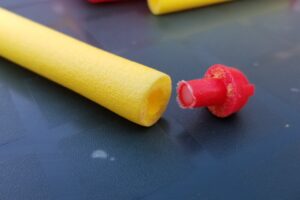 First, we’ll get one thing out of the way: the line comes with its own darts! They’re the same length as any standard dart from Nerf, Dart Zone, etc. The ones I had on hand averaged 1.12g each. The heads are, aside from an empty space in the middle, made of soft rubber and quite compressible. They also have an interesting tri-lobed mold. However, glue quality did seem to vary, with some darts glued all the way around the head and others only partially.

In terms of performance…don’t expect anything outstanding. They seem to have a similar spread to Nerf Elite darts, and that trend is exacerbated at high speeds – shooting the darts out of a 42mm Daybreak cage setup (around 160fps), darts did everything from making wide 90° turns to barrel rolls to sailing far off into neighboring yards. For a stock kid’s toy, they’ll be fine, but you should definitely get refills of something better.

It’s not live yet, but a QR code on the packaging directs you here, with phone apps available in the near future. Once that is live, we’ll see if it adds to gameplay in any significant way.

Back to the Blasters…

The included pistols have two distinct styles, one for Ryan, and the other matching the “Combo Panda” animated character (who features in a Ryan’s World channel for video games). As awkward as turning the “R” into the handle might look, it’s actually quite comfortable. Large hands will beg to differ, but everyone else (and kids) will be just fine. Both blasters are quite large for revolvers, with textured front grips under the cylinders. There’s simply a lot of plastic here, given the function of the blasters, so in that regard, $20 is a steal. In any case, the blasters feel quite solid, and should be easy for anyone to use.

One gripe I do have? The fins on top are there in place of real aiming sights, but are fairly useless, if not detrimental to aiming. But they at least complete the look.

Each blaster holds six darts in the cylinder, with the barrels rotating on the prime. They had no issue firing other darts besides the included variety. Sixteen darts are included.

Two miniature targets are also included in the package.

The blasters, even though they have a lot of plastic mass to move due to the large plunger rods/priming handles, still perform quite well. Both blasters in the package averaged 81fps, whether they were firing the included darts or Adventure Force waffles.

Rate of fire is limited to two shots per second, as you need to pull the handle back, remove your fingers, and fire before repeating the process again. Even so, that’s hardly worth complaining about. A large blaster like this is better for aiming shots than spamming darts, after all.

Here’s where things get a little interesting. The internals are very similar to that of the Zuru Xshot Reflex 6! That is, of course, once you take out all the screws and remove the various decorative plastic pieces and the main handle. The setup does take up more space, an this interpretation has an extra arm to assist in lining up the cylinder with the plunger tube, so it’s not a 1:1 copy. Still, it was clearly an inspiration. Of course, as you’ll see in the upcoming Renegade review, they aren’t above copying a mechanism, seeing as that blaster is a Turbo Advance in a new shell…but I’m getting ahead of myself. One review at a time!

I wasn’t expecting any of the Ryan’s World blasters to be good, but here we are. The advertising for this pack claims 90′ ranges, and depending on dart fit, that mark is certainly within reach. The blasters are comfortable and easy to use, while maintaining the brand’s look, and it all comes in at a good price. If the kids are fans of Ryan (or you just want something different for the blaster collection), this is actually a pretty good buy. Well done.