Author’s note: this early review is thanks to a free sample sent by Dart Zone. Thanks for the blaster!

Monolith: something having a uniform, massive, redoubtable, or inflexible quality or character.

Does that fit this blaster? Is it a bastion of the blaster world, taking on all challengers? Not quite, but for the price, it’s pretty good.

Scaling Down a Heavyweight

Three years ago, we saw the Adventure Force Quantum hit shelves at Walmart. It was a decent Nemesis competitor for $50 (plus 6 D batteries), holding 100 rounds and averaging three rounds per second. The new Monolith, meanwhile, shrinks it all down; the hopper (40 rounds) and shell size (Perses size) and price ($35) are all smaller!

Even for a smaller blaster, there’s a certain amount of chunk to be had. After all, it’s still running on 6 D batteries. Even so, the blaster itself is fairly thin. Standing it on end does give it that Monolith feel. 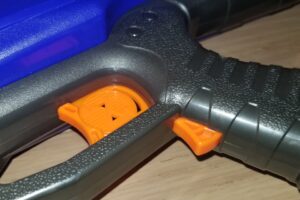 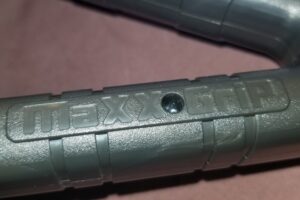 As with the Quantum, the Stock and the bottom of the grip both have rubberized pieces. The grips, meanwhile, are nicely textured (with “MAXX GRIP” embossed on the thumbhole stock). With the battery weight in the back, the Monolith is easy to hold and quite comfortable. It comes with a rev trigger and a standard trigger – the former is a tad small for my taste, but it works.

The blaster loads via a side door, which is opened by an orange sliding tab on the left side. Sorry, lefties, but you’ll find it awkward to reload. The door only springs open slightly due the the safety switch, but it’s enough to grab and open. Personally, I would’ve preferred the door itself be spring-loaded, so that the user could pull the tab, throw in some balls, and slam the door back down. Regardless, it’s easy to use, and wide enough for loading ammo.

There are several sling points around the outside of the blaster, should you choose to use them.

The Monolith essentially matches the Quantum in performance. Under full-auto fire, the blaster averaged 98fps, at three balls per second. It should be noted, though, that there are hiccups in loading the balls; sometimes they fire fairly rapidly (closer to 3.5 balls per second) or less so (around two). Rate of fire seems to get better as the hopper empties. Which makes me wonder if more space would help any. Testing to be done later. 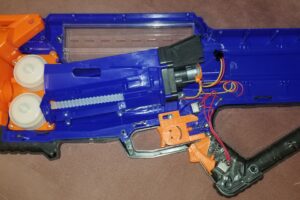 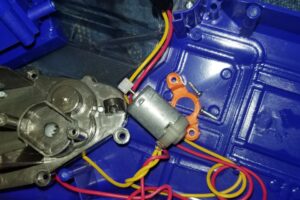 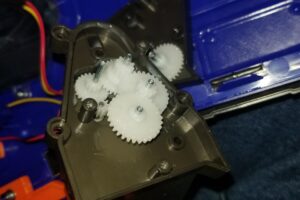 Within the shell, you can see the vertically set flywheels and the agitator/conveyor mechanism. The latter appears to be shorter than that in the Quantum, so the fact that it’s averaging the same rate of fire is impressive. The agitator consists of a flap that moves up and down as a plastic impellor lifts it from below.

The flywheel motors appear to be standard Rival-size motors, but the agitation motor is a simple 130 motor. Should that burn out for some reason, it can be replaced. It can also be pulled out without needing to take apart the gearbox (picture included for reference).

Hyper may be out, but Rival blasters aren’t dead yet, and the Adventure Force Monolith fills a void on shelves. The rate of fire may not beat Nerf full-auto Rival blasters (especially favorites like the Perses), but those aren’t on shelves anymore. Indeed, for that reason alone, it might be worth buying. At $35, a 40-round hopper with decent rate of fire is at least worth trying, and especially as a project blaster, should you plan to ditch the D batteries completely.