With the absence of Toy Fair and other press events, releases on the Nerf front have been relatively quiet, aside from new lines like Rival Curve Shot or Hyper. However, other blaster lines are still chugging along, including Ultra.

To that end, a new entry has come along, appearing on some Walmart shelves without warning. It’s odd – Ultra released with lots of fanfare, but initially failed to live up to the PR promises. Now, the Ultra Select is silently releasing, but (within reason) meeting those expectations, two years later. 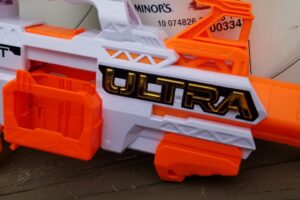 The notable “gimmick” of the Select is the ability to select which magazine to fire from; moving the forward grip slides the magazine carriage from side to side (simply pushing the carriage also works). It’s a similar idea to the Buzz Bee Mutator, but with better execution. The magazines also have opposing clear windows for keeping track of ammo. However, just like the Mutator, there are multiple ammo types. Which leads us to the new Ultra darts! 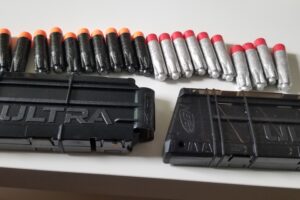 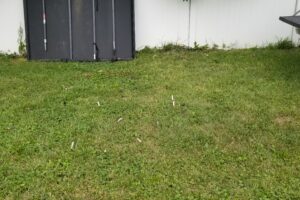 These Ultra Accustrike darts (for lack of a better current name) feature wide heads with flat fronts, similar to how Mega Accustrike was done. Initial testing has them hitting much tighter groupings at distance, as well as slightly better initial velocities out of the Select. War use is still up in the air (if there’s wind, you’re out of luck regardless), but even so, we finally have accurate Ultra darts. Hopefully we will see these on shelves soon – and hopefully not for even higher prices than the $0.50 a dart that Hasbro wants. Paying a premium for a proprietary dart is one thing; paying even more for what it should have been in the first place is absurd.

Beyond the dual magazine setup and the new darts, the Select is also a full-auto blaster. Yep, we have a new “rifle” to play with!

The operation is as you’d expect – depress the rev trigger to turn on the flywheel motors, then pull the main trigger to fire. Interestingly, if no ammo is present (or the wrong ammo, because this is made only for Ultra), the pusher mechanism will stop, reverse itself, and turn off until the next time you pull the firing trigger. So you’ll have an audible indication (or rather, a lack of one) that your magazine is empty.

The blaster still retains the standard Ultra-sized grip, along with a hand guard that’s restrictive for larger fingers, especially in the trigger area. Granted, I’ve gotten used to it, but it’s still annoying. The stock holds the six C batteries, and is actually a decent length. With the weight sitting there, the blaster is nicely balanced. The shape has something to be desired, in my opinion, but I imagine stocks are, outside a few really bad  examples, just matters of preference. This one is large and adequate.

The carry handle is nice, though I suspect it serves to also strengthen the shell (a magazine carriage instead of a single magazine well means less support for the blaster shell itself). There are also multiple sling points, and a solitary tactical rail on top. The large barrel is aggressive looking, and wide enough to not interfere with dart flight.

Overall it’s a fun blaster to handle, despite the design issues inherent with the Ultra line.

The blaster, at least in my testing, was quite good. The full-auto only operates at two darts per second, but it also doesn’t see any notable slowdown in launch velocity. That makes for an acceptable tradeoff. Standard Ultra darts, at least over the chronograph I was using, averaged 94fps, while the new design averaged 103fps. We’ll see if more testing from other reviewers shows the same thing.

This is where things get interesting. It’s the setup you’d expect from a Rapidstrike (scotch yoke pusher, three switch setup), but with extra bits attached, and a main PCB controlling everything. 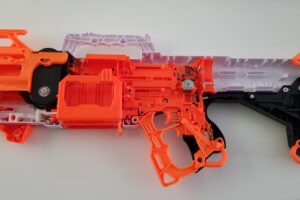 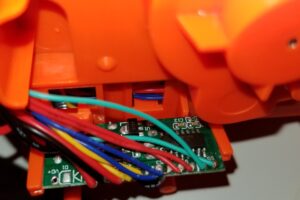 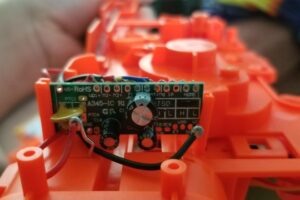 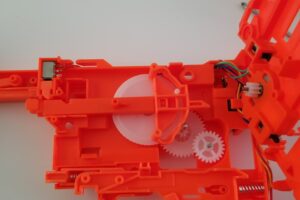 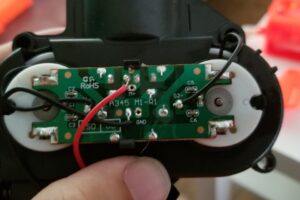 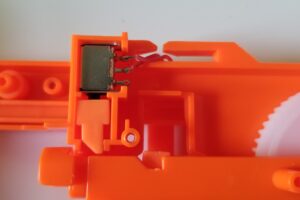 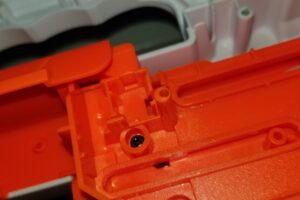 The guts of the blaster can come out all at once, which will make rewiring a breeze. Whereas a Rapidstrike (or Turbine, for that matter) have the pusher gears in a discrete unit, the pusher motor, switches, and various gears are all contained in the general clamshell of guts here.

The Ultra dart-only mechanism here is combined with the pusher, and makes the master PCB necessary. If an Ultra dart doesn’t depress the safety, a plastic tab will slide into place, physically impeding pusher movement. If that was the only thing here, that would destroy the gears as the pusher fought against it. HOWEVER, there’s also a switch that ceases to be depressed when this happens. When that signal gets cut, the pusher motor is put into reverse, retracting the pusher instead of continuing the initial motion. Once the pusher position switch is engaged, the mechanism shuts off and resets, waiting for the next trigger depression to start things over again.

Finally, there’s an interesting artifact from product development. Namely, there’s a slot for a jam door switch, but the switch itself isn’t there. Seeing as Ultra blasters have mechanisms to prevent firing non-Ultra darts and objects, I assume that provision was made for an extra switch until the pusher mechanism safety was proven. At that point, Hasbro could delete the switch to save money…and since molds were already made, there was no point in investing in new ones simply to remove that slot.

How well do the new darts fire in a rewired Select? That will have to wait. Check American Foam’s YouTube channel for his thoughts on the blaster once he’s put it through paces, then I can get the blaster (and darts) back to see what happens.

The Ultra Select is, quite frankly, a demonstration of what Ultra should have been. The new darts show what Ultra could have promised, had they waited to release the line a little longer. The blaster, meanwhile, offers a great platform, with both full-auto capabilities and being able to swap magazines on the fly, faster than physically replacing the magazines themselves.

The issue now, however, is whether it’s too late for blaster fans to care. Ultra magazines aren’t something we’ve seen in stores, aside from select hobby shops, so the effectiveness of the Select in a loadout is questionable (unless you’re a weird person like me). The new darts work far better, but buying them separately has yet to be confirmed.

It’s a great blaster. I’m just not sure if it came soon enough.