Prime Time Toys hasn’t been one to shy away from unique blaster mechanisms. The dart hopper seen in the Adventure Force/Dart Zone Commandfire and Destroyer has been a unique success, allowing for high capacity without magazines. At the same time, though, loading the dart hoppers in battle can be tedious, especially when you don’t have time or cover to do so.

This year, we have the Matrixfire. It changes the formula, mounting the hopper to the side of the blaster and making it fully removable. The overall mechanism is still a bit inconsistent compared to magazine-fed blasters. However, combined with ergonomic improvements and the ability to essentially swap ammo boxes, the dart hopper has (in my opinion) become just as competitive an option as the magazine.

The past hopper-fed dart blasters weren’t the best in the ergonomics department. The Commandfire, for all its innovation, was quite chunky and still used an on-off switch. The Destroyer opted for a “minigun” layout; this made haAAAAZndling far easier (along with having a rev trigger), but made firing from the hip the only real option. Centrally mounted dart hoppers, it seems, present design limitations.

The Matrixfire eschews all that by deleting the hopper from the main body completely. The blaster itself has a fairly traditional layout. The main handle has both rev and firing triggers, and a front grip mounts under the barrel. The body, while plainly molded, has dark panels to help fill out the space around it. With the hopper attached, the end result looks like a portable toy version of an MG42 or similar contraption.

The hopper itself differs from previous designs with an elongated profile and feed belt. It still has the damper pressing darts down, as well as an agitation flap. This time, however, everything is in a self-contained unit. Upon insertion into the blaster, matching gears mesh with each other to power the belt and agitator. The lid to the hopper is hard to open, but I imagine that’s on purpose. Seeing as the hoppers are designed to be removable, it would suck to carry extra hoppers, only for the lids to jostle open and spill darts everywhere.

The dart pusher this go around isn’t an actual pusher arm, but an oblong wheel. This sits above the end point of the hopper’s feed mechanism, and connects to the dart through a hole molded in the hopper. There’s also a safety switch nearby, so you can’t fire the blaster without the hopper in place.

The blaster feels great in hand, and in both looks and tactile qualities, I can’t find much fault.

The Matrixfire, when it comes to performance, is more akin to the Commandfire than the Destroyer. My unit averaged 87fps, and three darts per second. Due to the complex feeding mechanism (dart hopper + belt conveyor + pusher mechanism), there can be a delay in firing after pulling the main trigger. It’s certainly not a deal killer, but it is something to be aware of. Magazine-fed fully automatic blasters are always going to have an advantage here. Additionally, hopper-fed blasters in general (not just darts) will see some variance in rate of fire as ammo lines up to be fired.

Of course, we could make the blaster stronger… 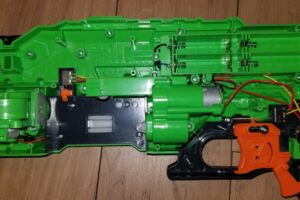 The Matrixfire features a horizontal flywheel cage, as well as a unique pusher setup (as previously discussed). The pusher motor itself isn’t a standard size; while its longevity in a rewired system remains to be seen, making a shim for hobby motors wouldn’t be hard.

I already have 3d printed flywheel cages available on Thingiverse. You can fit 130, 132, and 180 motors in the shell! How much plastic needs removed to accommodate aftermarket flywheels, however, remains to be seen. I haven’t made it that far yet.

Dart hopper blasters are several years old now, with iterations and improvements on the original design reaching shelves. The Matrixfire takes it in a somewhat new direction, putting the hopper on the side of the blaster and making it removable. Now with two options for loading (fill the hopper by hand, or swap it), the system becomes even better than before, even if it doesn’t spit darts out quite as fast as the last model.

After using this in a war, I look forward to getting a few spare hoppers and making it a part of the HvZ loadout.