Double action blasters aren’t common; the Nerf brand itself has only done it four or five times in its history. So when another major label tries to tackle the subject, it’s worth noting.

These blasters are never going to be the top dog in terms of performance. However, they’re lots of fun, and the Triggerfire is no exception. However, it has what the others don’t: endurance. Assuming your dominant hand is strong enough to keep firing over an extended period of time, it’ll be a great blaster to use. Just be aware of a few quirks…

Yep, the trend of the “off-brands” using giant drums continues. In this case, Buzz Bee (the manufacturer) elected to use a removable 30-round drum. Upon insertion, a ridge in the mounting rod flexes into position, locking it all in place. It’s not much, but I have yet to see it fail or let go of the drum from movement or shaking.

The drum is contained within a large shell, build for two hands. And it’s extremely nice, with lots of contours and details. The purple shell with green and pink accents actually looks really good, and is a great departure from the usual color schemes we see.

The trigger is quite wide, made for all fingers to press, and the ridges are wide enough to fit all of your fingers. This makes pulling the trigger much easier, and more comfortable than expected. Frankly, if Buzz Bee designed regular grips as well as this, they’d probably have more favorable opinions from various internet blaster enthusiasts! 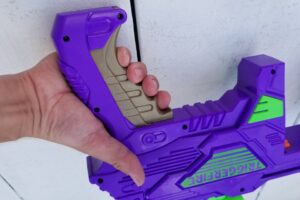 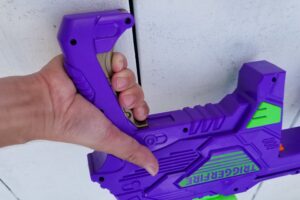 Blaster operation is simple: pull the giant trigger lever all the way back. This first rotates the drum, then fires the dart once all travel is done. Due to operations occurring in that order, you have to be sure you pull back all the way. Otherwise, you can misfire. Furthermore, it seems that, even if you are trying to fire as fast as possible, you have to be sure to let the trigger out all the way. Just as the rotation occurs before firing, the rotation mech re-engages before the priming mech does. It takes some conscious effort if you’re trying to rapidly fire off darts, but you get used to it.

There is one rail on top for the included faux sight, which fits other Buzz Bee attachments from the past few years.

Assuming proper operation, the Triggerfire does quite well. I averaged 66fps with the included darts, which is considerably more than Nerf blasters like the Nailbiter with similar operation. Furthermore, I was able to fire three darts per second, although a bit slower will make it less likely you commit an operation air as detailed above.

However, I should add a caveat: this is using new darts, and darts in good condition. After a war’s experience, worn darts in community dart piles have shown themselves to not fire well. Keep that in mind!

The Triggerfire…isn’t the best blaster for wars with space to shoot, or with higher-powered blasters on the field. Doesn’t mean I won’t try fielding it against modded blaster users!

Practical uses? Firstly, stock blaster wars (the traditional kind). Humans v Zombies would also be appropriate, as would indoor wars, or those with lots of cover. In any case, using it will depend on how much you’re firing the blaster, and how long you can keep it up. Double-action triggers on blaster and long game rounds don’t mix.

The Adventure Force Triggerfire is quite a unique blaster, with double-action blasting and thirty dart capacity. Is it the best option out there for $20? Probably not. But is it lots of fun to use? Definitely! And depending on the setting of your blasting, fun and effective aren’t mutually excusive. So if you’re doing something in close quarters, it’s worth a try!