EDIT: The review has been altered after a severe issue led to two blasters breaking. Until future runs are fixed, I won’t be rating this above zero – further explanation below.

EDIT 2: The old version, which shouldn’t have hit shelves, has been taken off shelves and replaced. To see the new review, go here!

There’s something about cartoonishly large blasters that makes me happy. In that regard, the Thundershot SHOULD be a standout. Sure, the size means you can’t dual wield them effectively (like you would a Hammershot), but with eight rounds in the cylinder, it has plenty of capacity by itself, all for $10.

Even so, ergonomic and performance issues keep it from being the blaster it could have been. If only those weren’t the only issues…

The Thundershot is large, especially compared to a normal person’s hand. Large, that is, in all areas except the length of the handle. Even for a kid’s toy, the handle is shorter than needed; it’s likely that your fingers will rest on the ridges instead of between them. The rest of the handle is great, from the width to the dimples on the side panels. But it makes that error far more noticeable. And yes, I gave it to younger kids to play with, just to make sure.

The rest of the blaster, however, is easy to use. The hammer prime is easy to engage, be it with the thumb or the flat of your off hand. Loading the blaster is a breeze, as cutouts allow for two darts to be loaded on either side before you need to turn the cylinder. The trigger pull is initially stiff, but quickly gives way once it releases the plunger mechanism.

You can try to use the blaster one-handed…but it’s quite a stretch. Trust me, it’s not made for that.

The bright colors make the blaster that much more goofy…but once you’ve seen what a bit of paint can do, you’ll realize the blaster has lots of potential as a prop.

However, that’s not what I’m here to grade, so…on we go!

The blaster can easily fire off two darts per second. However, the speeds at which it fires tend to be somewhat subpar. My testing with two of the blasters averaged only 60fps. Granted, I remember the Hammershot originally firing that slow (or slower), so it’s not a complete dealbreaker.

Here’s where the blaster starts to be a bit of a letdown in terms of practicality. My poor attempt at dual wielding aside, the blaster is too large to holster in the usual ways (tool belt, harness, etc). The firing speed is also more noticeable now against contemporary blasters than the Hammershot was when it originally released. That performance gap… 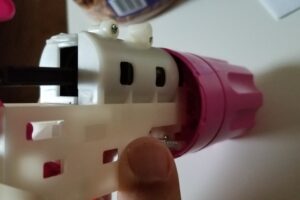 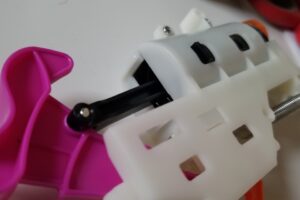 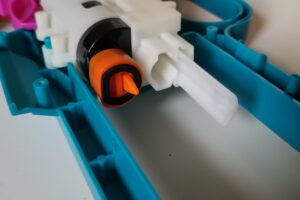 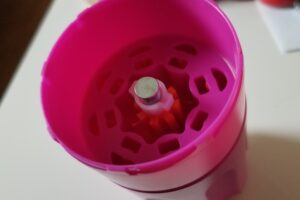 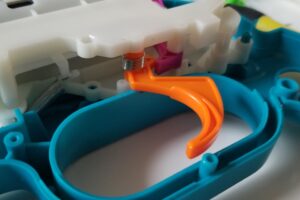 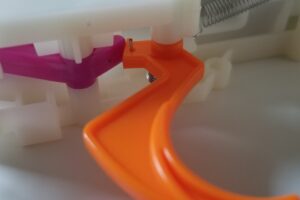 If you’re looking to modify the blaster…be warned. While there’s certainly space to upgrade the spring, the plastic in the catch mechanism is somewhat thin. In fact, it’s the thing that (now) keeps me from recommending the blaster, as two have now broken in that very spot. One birthday party and a double autopsy later, and you can see that the plastic can’t handle the stress of even light use.

The Thundershot is quite lovable. However, it’s not nearly as practical as one would hope. Furthermore, flawed internals severely limit the usable lifespan, to the point where you’re wasting $10. Until this issue gets fixed, simply avoid the blaster.