For those not in the loop: Buzz Bee has had some difficulties with putting the correct blaster on shelves. There were two versions of the blaster; the former had the trigger directly acting as the sear, while the latter had a standard catch mechanism. The former was not approved for production by Buzz Bee, but one of the factories in China made a production run anyway and shipped it to Walmart. That’s how several reviewers (myself included) bought blasters on shelves, only to have them break after light use (if not in the first few shots). After trying to rectify the situation and recall the unapproved blasters, the proper ones are now appearing on shelves (I bought two in Cincinnati). For a full story of the situation, see Mongoose Jake’s video here.

So far, this Thundershot is actually exceeding my expectations. It’s still a weird, ergonomic mess, but it manages to be fun, effective, and a bit more versatile than the first version.

The Things To Look For

Like the first (inferior) version, this one is still an oversized revolver, with the colorful, bulbous body and strange proportions. The handle is relatively small, but the trigger well is huge. Meanwhile, the hammer priming mechanism is mounted far up on the blaster, making one handed firing all but impossible (indeed, I don’t think it was designed with that in mind).

The proper version of the blaster is easy to test on shelves, due to the open box format of the packaging. You can easily prime the blaster and fire while still in the box. The trigger SHOULD NOT MOVE when you prime the blaster. If it does, you have the old version in hand and should put it back.

For the most part, the cylinders on the newer version seem to have a matte finish, as opposed to gloss. They also only have barrel inserts at the base, with a weirdly shaped front on the cylinder itself. However, the priming test is the most reliable way to make the judgement. Granted, the old ones should be mostly gone by the time you read this, but I’ll leave this here, just in case.

This was a pleasant surprise. Due to only having short barrel inserts (as well as dart posts), the Thundershot is able to use short darts straight out of the box, at identical speeds to full darts. Of course, you have to make sure to push the darts all the way in; otherwise, you fail to engage the air restrictor valve. But being able to use short darts out of the box is nice, especially when both types of darts are being sold under the Adventure Force brand.

As with the first version, loading the blaster is easy, with two loading ports on each side. It’s simple to load the exposed barrels, turn the cylinder, and fill the remaining barrels.

Both of my Thundershots fired consistently, averaging 69fps with the included long distance darts. The Adventure Force waffles performed similarly, as did my supply of short darts. Of course, the latter two dart types were a lot more accurate than the included darts. In any case, I can hit my back fence from the rear door of the house, so the 80ft range claims are accurate.

The rate of fire remains a steady two darts per second. You might be able to go faster if you depress the trigger and fan the hammer like a real revolver. Effectiveness of that tactic, however, is questionable. 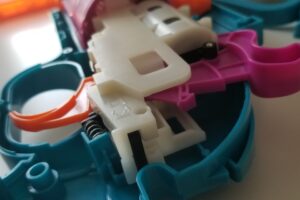 Here’s were the true difference lies. The hammer (which is linked to the plunger) latches under the black, plastic catch. This handles the involved forces far better than the first Thundershot. The trigger isn’t physically attached to the priming mechanism. Indeed, all it does is move the black, spring-loaded catch when depressed.

I’m glad Buzz Bee got the factory and distribution issues resolved, as well as those involving the various influencers who ended up with bad blasters. The Thundershot is still an odd blaster, but the blaster as Buzz Bee approved it is better than the first, even before the breakage issues. It still won’t be everyone’s cup of tea, especially due to how large it is for just a pistol. But being reliable and fun to use for $10 goes quite a long way.