A magazine-fed, auto loading, bow style blaster? That’s a new and novel idea, compared to past examples. Nerf had the Stratobow, which advanced a large clip. Hobbyists have made magazine-fed bow blasters in the past, but they required a separate action to load a dart. Buzz Bee, however, has found a novel way to do it, by essentially putting a slam-fire mechanism on the plunger/breech assembly. Once that flies forward and loads a dart, you just have to release the handle to fire.

It’s a system that works quite well, far better than I expected. Let’s dive in!

If you were expecting a nifty bow that unfolds at the press of a button or flip of a wrist…you’re expecting too much! The blaster is folded up in the packaging, and the limbs can be moved apart into position once removed. The limbs have an indexing mechanism at the pivot points, so no need to worry about limbs collapsing with use. They’re purely decorative, but they look great for a kid’s toy, and the cams move during use.

The bow, in current Buzz Bee style, features the blue, neon green, and orange color scheme. It also feels great, with minimal creaking or flexing, and a textured (adult-sized!) grip. Could it stand to be a bit wider? Probably. But it largely does the job well.

Notably, the Compound Bow is ambidextrous. Both sides of the blaster feature a magazine release button (in the limb support) and a reloading lever. Since the bow is a closed bolt design, you need a way to hold the system open for changing the magazine. That little lever raises a catch for that purpose; after changing magazines, just continue pulling back the “arrow” and it will disengage.

Sadly, these two things are sized a bit small, and spaced just far enough apart that smaller hands gripping the bow won’t be able to reach. Even with adult hands, I have to choke up on the grip for my thumb to reach the lever, or for my index finger to reach around the limb support to press the magazine release. It’s a small change, but it would improve the user experience, in my opinion.

Once you’ve followed the instructions and loaded the bow, operation is simple. Pull back all the way, until you hear plastic slamming on the inside. That’s the plunger tube and breech being pulled forward by a decently strong spring. This loads the next dart in the magazine.

Once you hear that sound, you just have to release the handle. The plunger will move forward, firing the dart. Repeat until you run out of darts!

In testing, virtually all the stick magazines (aside from exotic ones like the Nerf Halo MA40 magazine) fit the blaster. The Buzz Bee 30 dart drum also fits in magazine well! Nerf drums…almost fit. The back of the drums press against the limb support plastic. Removing just a few millimeters of green plastic would make the Nerf drums compatible.

In any case, the Compound Bow already comes with 20 darts, and two ten dart flip clips that you can connect to each other. There’s also a scope that mounts on the rails, though that’s not much help at distance!

Firing darts through an airsoft-style chronograph is hard when using a bow, and can vary depending on the release. I ended up averaging around 60fps from the shots that cleanly went through, which seems a tad low. Testing based on range, however, did yield good results. Some shots landed on the roof of a neighbor’s shed behind my house – the edge of which is 85′ from my back door. So the 90′ range claims are completely plausible. For comparison, Adventure Force waffles shot from the Compound Bow hit between 70′ and 75′. I’ll have to see what numbers other uses get on their chronographs.

Rate of fire is about two shots per second. For a blaster, that’s normally just okay, but with a bow, that’s quite good!

Accuracy depends both on the darts used and practice. You’ll need to fire a few magazines worth to get the feel of using the Compound Bow.

Part of the dart velocity issue may be the dart gate design. The flap within the barrel has to stay up during the entire draw phase; when the plunger and breech are released, it holds the dart in place to load properly. At the end of the plunger tube motion, the “lock” holding it in place moves out of the way. However, the flap is spring loaded, and there’s no mechanism for lowering it!

Normally, Buzz Bee magazine-fed blasters have a manual linkage connected to the trigger, and all the pieces interface with each other. There’s no trigger on this blaster, though. Here, Buzz Bee has chosen to do two things:

Thus, the dart you’re firing physically moves the dart gate out of the way. While not an efficient decision, there had to be a compromise somewhere, and the engineers tried to lessen the effects. I do wonder how well the blaster would do if it were converted to a pusher-type breech and made compatible with short darts…

As for the rest of the blaster: 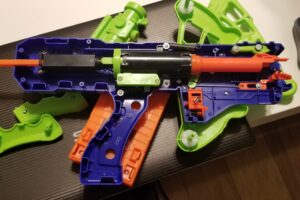 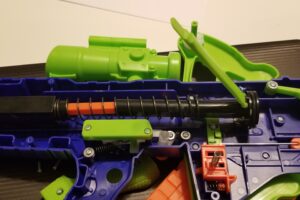 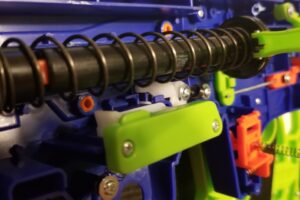 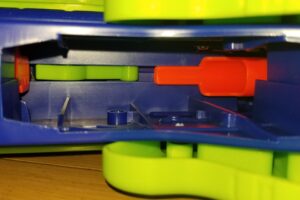 The third picture shows the mechanism triggered be the reloading lever. It simply raises a secondary catch to hold back the plunger tube while you change magazines.

I’m actually excited to use this blaster at upcoming games, especially Humans v Zombies. Bows have never really been viable there, and this blaster finally makes that a possibility.

There are a few gripes to be made about user experience, but the Air Warriors Compound Bow largely meets the range claims on the box and accomplishes what it set out to do. If anything, it’s a unique and fun experience that, with practice, could be quite formidable. Just remember that the range in practical use will be limited, especially indoors. Not every building has an insanely high ceiling that lets you fire way up in the air!