Buzz Bee has quite a few blasters appearing at Walmart this fall. As always, Buzz Bee is doing a great job with the sidearms, and the Adventure Force Equalizer is no exception. This year’s replacement for the Wizard/Clash Combat, it aims for a thinner blaster for the same performance and price (two blasters for $10), and succeeds. If you need blasters to holster, or spares to loan at stock wars, this set will equalize the playing field.

As with the Thundershot and Triggerfire, the Equalizer comes in bright, neon colors. It’s easy to grip the priming slide, and while the main handle is a tad small…it’s unavoidable in such a compact package, so it’s an acceptable tradeoff.

Like other Buzz Bee sidearms, the Equalizer features a multi-dart barrel. Whereas Hasbro has a patent on the “smart AR” mechanism (fire barrels in order, and reload any of them, but later barrels are weaker), Buzz Bee uses a revolving plunger tube. You fire a specific barrel every time; this makes loading the right barrel important, but it also means they all fire equally in strength.

The shell is solid, easy to grip, and considering the size, I don’t have any real complaints.

The Equalizer blasters both averaged 68fps in my testing, with two darts per second being the typical rate of fire. Granted, you only have four shots in each pistol, so trying to spam darts will make you run out quite rapidly.

There’s not much to say here, aside from the fact that they’re sidearms, and not the best for open combat unless your main blaster is jammed or empty. Use cover! 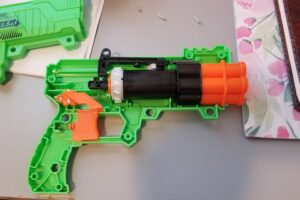 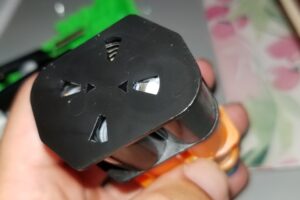 The Equalizer is simple inside, with a priming bar that both pushes the plunger back and rotates the plunger tube. The gasket on the front of the tube lines up with the slits behind the barrels, letting air pass through.

It should be noted that while the barrel assembly is solvent welded together…it would be easy to simply cut the stock barrels off and replace them with brass or some other barrel material. The plunger tube has enough volume to push darts faster than 68fps!

The Adventure Force Equalizer is a basic sidearm, and that’s all it needs to be. It shoots well for its size, comes in a two-pack for $10, and is easily found at Walmart. Grab some for yourself or a small kid in your life!