Adapting video game models to real life is always a challenge. Even more so when the IP involved is famous for being, well, blocky. The Nerf Roblox Pulse Laser is a great example of this. Based off a weapon in the “Arsenal” game within the Roblox experience, it’s been adapted into a semi-auto dart blaster.

It’s not the most ergonomic of blasters for regular use. But if you’re looking for a fun project blaster, then it’s the blaster for you. 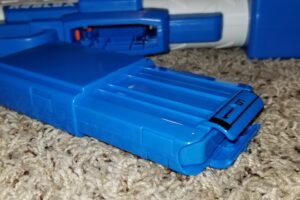 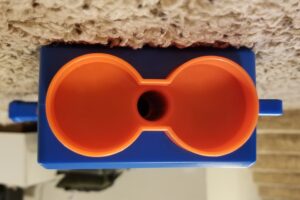 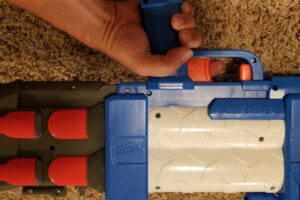 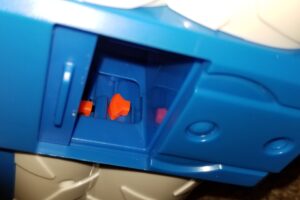 Let’s start with the obvious: this blaster doesn’t work like the in-game weapon. While the shell appears to have two barrels, there’s only one actual barrel for firing projectiles (To be fair, only the top barrel is usable in-game). It also has a magazine where the in-game front grip sits (indeed, it appears you should use the magazine as your grip). The jam door sits in this blue plastic space, as well.

The blaster’s main grip is rather blocky, making for an uncomfortable grip over long periods of time. The triggers (main and rev) are okay. However, the magazine release is a bit to far forward. Indeed, even with adult hands, it’s hard to actually engage it, given how far forward it is. It’s the exact opposite problem compared to some other blasters, where there was barely enough room for your finger.

The stock, while shaped to emulate the in-game model, is relatively comfortable against the shoulder. Adults will desire a slightly longer stock, but the target audience (kids and teens) will most likely be fine with it.

The sights are small and largely unusable. Sometimes things are better left not included, or made larger to actually be able to see through.

On average, the 4AA-powered blaster hit 68fps with single shots. Like most Nerf semi-auto blasters, you can get three darts per second if you care more for rate of fire than maintaining dart speed.

Operating the blaster, however, saw an interesting deficiency. The magazine well on my blaster is quite exact in its tolerances, meaning that you have to be lined up perfectly for insertion. In the heat of battle, that could be an issue. 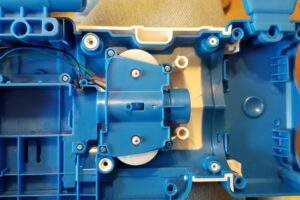 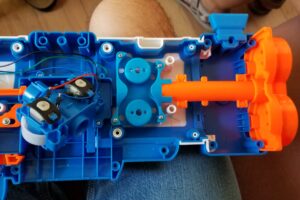 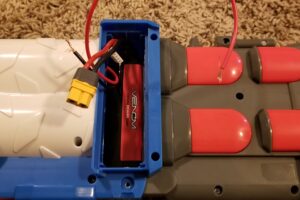 The Pulse Laser, luckily, has plenty of space for additions and modification. With the stock battery tray removed, you’re left with a rather large space for storing a lipo (pictured is a 2200mAh 3S, for reference, with there still being space). Meanwhile, Hasbro actually reused an old cage design; after snipping a few support ridges from the upper mounting posts, Evader cages can be used! Fitting hobby motors, however, is a very tight squeeze without experienced soldering jobs. There’s technically room for two or even three stages of flywheels…but given the mounting post pattern, those don’t exist yet. There’s also plenty of room above the pusher and associated guts for stuffing various electronics.

With a 41mm cage, Meishel 2.0 motors, and Daybreak wheels, I’m exceeding 160fps with my darts. Spin-up time is less than you’d see with stronger motors, but I don’t need instant spin-up for this blaster.

In stock form, the Nerf Roblox Pulse Laser is an okay adaptation, but is limited by having to model an in-game weapon. Even so, it’s fun to use and has lots of modding potential. For the average consumer, though, it’s simple an okay purchase.