With the wild success of the Adventure Force Nexus Pro (and subsequently the Aeon Pro), it was only a matter of time before Dart Zone had high performance blasters on the shelves of other retailers. Target had previously carried the Dart Zone Pro line on their website. Now, however, they have Dart Zone Max blasters and darts on shelves, starting with the Stryker.

If you’ve used a Nexus Pro, then the Stryker isn’t, well, strikingly different. But a different flavor of a great blaster is still a great thing!

Does it Come in Red?

The Stryker, unsurprisingly, shares the same basic format of other spring-powered primaries. It’s somewhat rifle-like in shape, with a pump grip, tactical rail, adjustable stock, and various accessories. Like the Dart Zone blasters before it, it comes with both a full-length dart magazine and a short dart magazine (an adapter is also included).

Unlike the Nexus and Dart Zone Pro, the Stryker comes with both orange iron sights and a large “scope” attachment. In reality, it’s just a fancy if regular sight, but given the firing velocities, it’s still somewhat useful. Meanwhile, the stock features a raised cheek rest. I find this feature nice to use, but (as with any Nexus v. Stryker comparison) it will largely come down to personal taste. 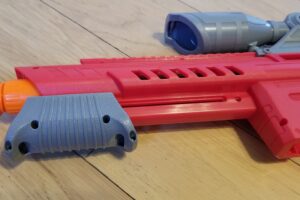 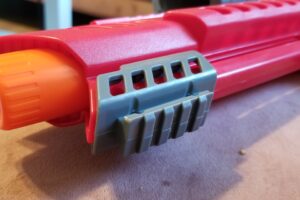 Another matter of taste is the pump grip. The Stryker comes with a horizontal foregrip. Granted, if you take the grip apart, there is a Picatinny rail underneath for mounting grips of your choice. But depending on personal comfort (as well as how large your hands are/if they’ll hit the shell during the priming motion), the grip may be another point of contention. I myself have had no trouble with the priming grip, even under higher spring loads during personal testing. 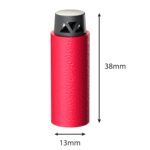 Like other Dart Zone performance blasters, the Stryker has a certain amount of slop to allow the use of both full length and short darts. There is also a priming lock, which can be undone via a button on the back of the tactical rail.

The included darts are all of a new variety, which will be subject to a future comparison post! However, the red foam is a vast improvement for both tracking darts in flight and recovery after use. They also feature grey, sloped heads that feed well in any high-performance blaster. Stay tuned!

The Stryker and its sealed breech do wonders for dart velocity. With the included full length darts, velocity averaged 137fps; that increased to 153fps with the included short darts. Accuracy was also great – I can repeatedly fire and hit a small, head-sized target 60′ away when sitting on my back porch.

Performance with other full length dart types will vary, depending on the width of the dart head (standard waffle tip darts will fire, usually, but at reduced velocities due to the extra friction).

If you’ve seen the Nexus Pro, then this really isn’t anything new. Do know, however, that dues to slight differences, some aftermarket parts (like Worker metal kits for the Nexus) aren’t cross-compatible with the Stryker. However, other parts will. The spring is still housed within the buffer tube by an orange endcap, and fps tuning caps (like those from Out of Darts) will definitely work.

Keep an eye out for updates on various aftermarket parts; I have little doubt that the Stryker will become just as customizable as other Dart Zone blasters.

The Dart Zone Max Stryker doesn’t bring anything particularly new to the table. What it does bring is shelf space on a retailer not named Walmart, along with a new (and accurate, and easily seen) dart variant. It’s got the same great performance as the Nexus Pro, in a similar format. It’s just up to you whether you prefer one color scheme or one set of accessories to the other!