AUTHOR’S NOTE: Hasbro was kind enough to send me free samples for review. Thanks, guys!

Out of basically nowhere, Nerf not only announced another license, but also a new line of blasters, available online from Walmart! (I ordered them on Monday, and they arrived yesterday at the same time as the free samples). The blasters are fairly basic to start with (two three-shot blasters, and three Microshots), but they nail the Minecraft feel down.

Today, however, we start with the Stormlander Hammer, an item from the Minecraft: Dungeons game. The Nerf version is a blaster that, instead of lightning, can fire theee darts in quick succession. How much you need it, however, depends entirely on your level of fandom and roleplay interest.

The Stormlander, in toy form, maintains the blocky Minecraft look you’d expect. The sides of the hammer itself have foam coverings, but make no mistake: THIS IS NOT A MELEE TOY. There’s lots of plastic and weight to this, so don’t swing it at any of your opponents. That being said, at least a little effort was made to make sure kids are less likely to mark things up or leave dents by swinging plastic.

The blaster comes with three darts, which load at the top of the hammer. The user primes the blaster by pulling on the very bottom of the handle; the end will retract after priming. After that, pressing the trigger button fires a dart. It’s your standard smart-AR setup, firing darts sequentially, so you’ll fire a dart even if only one is loaded.

The Stormlander, in practice, is a pistol in an odd format. With just three shots, it’s made more for plinking and roleplay than for Nerf wars.

Even so, the rate of fire is plenty respectable, with two darts per second being easy to achieve. Velocity is also acceptable, averaging 64fps. Of course, that’s with a smart-AR. Initial shots are strong (around 68fps), and final shots drop to ~60fps.

The only real issue is aiming. Pointing a hammer at your target isn’t the most natural thing to do, after all. Hitting things consistently takes practice. 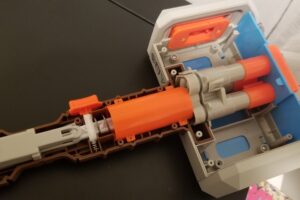 The Stormlander isn’t anything special inside. The plunger gets pulled back by the bottom of the handle, with an average-sized plunger tube. You can see, however, just how thin the foam layer actually is. Don’t hit your little brother with the hammer, okay?

Is this a blaster I’d use in a war? Of course! Would a normal person, though? Not at all.

The Stormlander Hammer is very much a blaster meant for younger Minecraft fans. Given the licensing and the size, $21 isn’t unreasonable. And the hammer is quite fun to use! Just ask my wife, who’s been on the receiving end all day. But is it essential for the collection? That depends entirely on you. There are better choices for utility, but for some, it may be the best choice for pretend play and fun.