The Rival line isn’t dead yet! The Curve Shot sub-series was this year’s entry, featuring adjustable barrels for sending shots to the sides (or down, for that matter). The first two blasters, the Sideswipe and the Flex, performed well as blasters and moderately well for trick shots. They were also available at multiple retail sites.

The Helix, however, is a Target exclusive. It’s also the best of the three, as long as you handle the blaster properly to account for the hopper design. Let’s take a closer peek!

Like the other blasters in the line, the Helix comes with a rotating front barrel. This repositions the hop-up tab, directing the backspin in other directions. The end result is that the ball either travels straight over a longer distance, curves moderately to the left or right, or makes a sharp dive into the ground. The bank shots are slightly useful, assuming you have enough room between yourself and the target for it to take effect. If your opponent is directly behind a wall, you’re out of luck. If they’re 10-20 feet behind the wall, however, you might have a shot. Assuming you know where they are, of course.

The big feature of this blaster, though, is the hopper feed mechanism. Nerf has done ball hoppers before for the large blasters, of course (Nemesis, Prometheus, Perses), but not for a manual blaster. This makes for a very interesting change in design philosophy – the full auto blasters can afford an occasional hiccup in rate of fire. A manual, one shot per prime blaster cannot.

The solution Hasbro chose consists of two rows of balls, sitting at a relatively shallow angle. The blaster alternates which row it feeds from, using a wheeled mechanism to drop the ball from the hopper to the breech. All of this gets fed from a rather massive door; reloading is a breeze!

Interestingly, while the blaster’s number (XXI-2000) indicates it holds 20 balls, you can load 30. This puts it on par with classics like the Rival Artemis, that have been a mainstay in stock game and HvZ settings for years, due to their small size and capacity.

The main grip is large and comfortable, with a crisp trigger pull. The priming grip is quite large, textured, and has enough meat on the back to make priming easy. Even after long games with sweaty hands, or (more recently) at a very humid HvZ Invitational.

There is a jam door at the top; if the blaster does jam (usually from an overly used round, a round of questionable quality off the internet, or tilting the blaster up a bit), rotating the wheel backwards tends to do the trick. Using genuine rounds of any of the major brands, I didn’t see any issues.

The Helix hits hard, averaging 92fps in my testing. There isn’t any slamfire, sadly, but it’s still quite easy to fire off a round every second. You could go faster, but that really depends on the arm strength of the user.

Yep, the Helix works quite well, but you’ll see dry fires in a few spots. Having a shallow angle to the hopper means you can’t point the blaster up while priming. And if you suddenly accelerate forward and prime at the same time…physics. The balls will roll back from the loading mechanism in that case. Even so, the blaster was more than up to the task of playing in a large indoor field with an fps cap of 200. 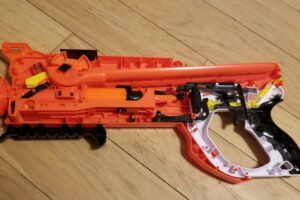 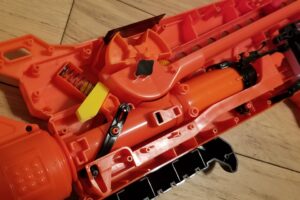 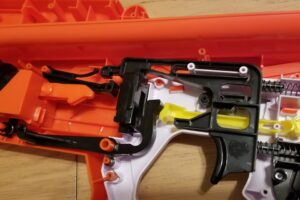 There are a few interesting features inside. The blaster has a direct prime (no gear system to help). All the necessary bits are there, from the safety (only on the right side of the blaster) to the priming indicator (which is humorously long due to the blaster design). The really neat feature is still that wheel up front, which alternates loading between the two rows of the hopper.

If you have yet to try a manually primed Rival primary, the Helix is worth a shot. It’s easy to use and reload, even if you have no desire to use the Curve Shot gimmick. With the impressive capacity afforded to the user, it’s hard to not like it. Just make sure to take care that you prime with the blaster level (or down). If you do that, you’re good to go.