Due to a busy life (work, weekend plans, etc), I simply don’t have as much time for modding as before. However, after having so much fun with Mega XL, I wanted more (and less chunky) options. And this kit clearly fits the bill.

Titan Forge Blasters has designed a kit for converting the Nerf Rival Kronos. Now, you can have a small sidearm that fires Mega XL quite well, up to 80fps. It takes some arm strength to use, of course. But having a small, powerful option for large ammo opens up possibilities. You can even purchase the files for personal use and 3d printing, if you don’t want to order the parts themselves.

There is a glaring issue, of course: Mega XL is wider than Rival. Often, you see people making blasters fire smaller ammo faster; in those cases, it’s as simple as stuffing a smaller barrel inside the normal one. In this case, however, we have to completely swap out the existing parts for new ones, and remove some plastic within the blaster. Both Etsy listings (purchase kit here) (purchase files here) include instructions in the photos, illustrating where plastic needs removed.

Once you’ve made room for the new parts, you can install them. You do need the o-ring from the original breech and barrel assembly; this goes on the new barrel. The ammo storage backstop (in the bottom of the blaster) is there so you don’t accidentally shove a spare dart all the way into the blaster. However, there’s no good way to mount it, given the interior of the blaster. As such, you’ll need some sort of strong adhesive or plastic epoxy. I had JB Weld on hand, which always works well. Remember: ONLY ADHERE ONE SIDE OF THAT SPACER. Otherwise you won’t be able to take the blaster apart afterwards.

Finally, you can get the blaster to fire with the stock spring, but not well (or consistently). You’ll need an upgrade spring of some sort (a K26 is recommended, and you can find precut sections of that online). I have full 11 inch lengths of the spring already, so I just cut them as needed. If you like, you can also lubricate the plunger o-ring, or add a wrap of teflon tape underneath to make a better seal. 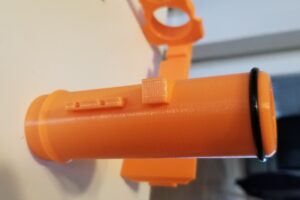 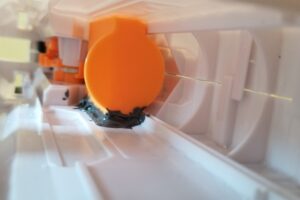 Oh boy, do the darts whistle! There is some variation in the width of Mega XL darts, so don’t be surprised if some fire better than others. If that’s the case, don’t stick the “bad” ones all the way in, to help them as much as possible.

Even so, the ones I had on hand (coming out of the refill packs) were firing in the range of 68 to 80fps, with an average of 76fps. That’s a fair bit of power. The darts also seemed to fire straighter than from regular Nerf Mega XL blasters – this part is very anecdotal, but I imagine having a full barrel that utilizes all of the air effectively helps.

Rate of fire suffers, obviously. You have to both prime a strong spring and load a giant dart. But given the fun, niche use of this kit, it’s more than acceptable.

Is this kit for everyone? Certainly not for small kids, or those who would have difficulties priming the blaster (various alternate grips and t-pull handles can help with that). If you’re newer to the hobby, then paying for the printed parts themselves is no small amount (buying the files to print your own is much less expensive). And you need to already have a Rival Kronos to spare, as well as a replacement spring.

Once you’ve completed the mod, however, it’s hard to put down. Nerf Mega XL blasters are large and chunky by nature, to match the ammo. This is a much smaller blaster that fires them better. And with it being so small, you can holster the blaster when not in use. After all, it’s easy to be the guy with a Nexus Pro, firing at people from a distance and only using the giant ammo as needed (be it for game type or for laughs). It’s much harder to be stuck trying to carry one of the original Mega XL blasters at the same time. Or in the case of the Boomdozer, being stuck with just that.

All that being said…please, someone take this away from me before I hit something fragile just firing around the house!!!