Hammer-primed blasters are one thing Hasbro has lots of practice on. When the Fortnite blasters appeared, it was only a matter of time before one showed up. The resulting blaster, the SR (silenced revolver), isn’t actually a revolver like in the game. But it still functions quite well as a sidearm. 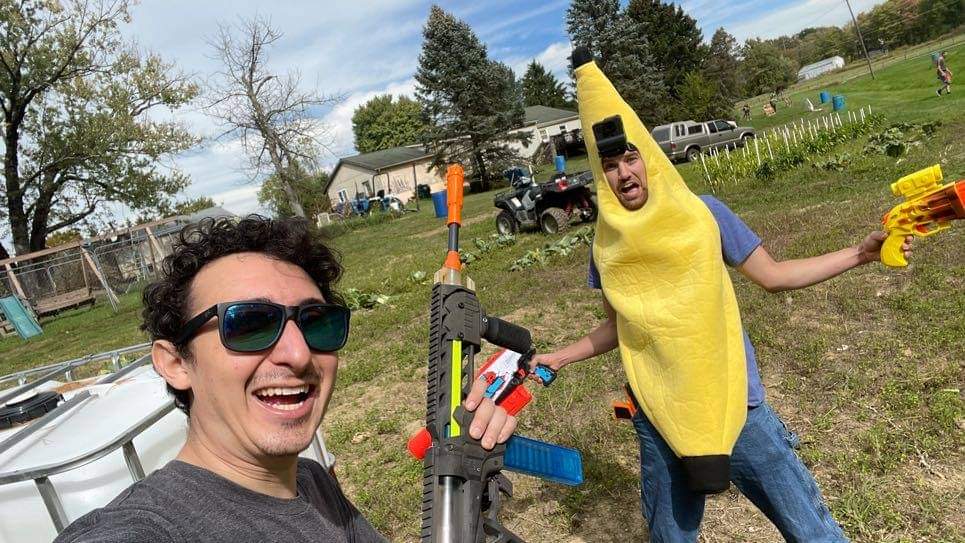 If you’ll think back, this blaster came out last year. In fact, it was one of the blasters on display at the last Toy Fair! So why are we reviewing now? Well, besides being late to the party, there’s also a new version on Walmart shelves, with not only the Peely wrap, but a bonus Peely Microshot. So at least for the moment, the blaster is still relevant. Especially when people like me are running around in costumes at games with it…

In any case, the SR is a comfortable, four shot blaster with a basic scope attachment and tactical rail on top. Instead of being a true revolver, the SR instead has a smart AR, allowing you to fire out of each barrel in order, even if you don’t have them all loaded yet. Even if you’re caught in the middle of reloading, you’ll have a shot to use.

Of course, it’s possible you’ll get caught reloading, due to the blaster design. The large “silencer” on the front means you have plastic to go around in order to load the barrels properly. It’s not something you’ll be able to do blindly, and is a tad annoying at times due to the extra care needed. That being said, it fits with the “video game weapon, but toy” aesthetic Hasbro is going for.

Aside from reloading, blaster use is quite easy. You can prime with your thumb, or with your off hand. So if you want to dual wield blasters, go right ahead. The grip is also quite comfortable, a little more so than the Hammershot, in my opinion.

Two darts per second is quite easy to achieve with the Nerf Fortnite SR. Hammer primes are easy to do repeatedly, even one handed. The dart velocity is also nothing to sneeze at – my initial shots averaged 74fps, while the final shots still managed an average of 60fps. Alas, Smart AR designs introduce a lot of dead space that the air has to pass through before the last few barrels can fire. 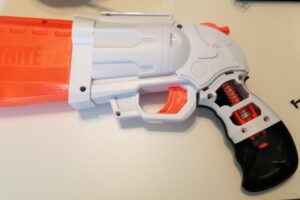 If you’re at all familiar with the Hammershot, then this will be extremely familiar. The spring rests within the grip, and a beefy plastic hammer transfers power from the spring to the plunger. note that the grip is basically clipped together, and must be separated prior to fully disassembling the SR.

The Fortnite SR (and its reskin) is a handy sidearm, with easy priming and good dart velocity for a small blaster. It’s one caveat is the extra care needed for reloading, but beyond that, it’s a fine blaster to use. If you spend a couple more bucks at Walmart, you can get it in a banana wrap and with a Microshot. At that point, just get the latter package and let your fruity dreams come true!