Earlier this year, Hasbro decided to cross promote Dungeons and Dragons with their other brands. Nerf was no exception, seeing three brand new blasters released in the Dragonpower series. One bow, one single shot pistol, and one very long revolver later, we have blasters fun for both play and for imagination. The line isn’t exceptional in performance compared with other Nerf dart blasters – it’s on par with Elite. But the styling is fantastic. Whether you’re a kid or a collector, they’re worth a look. 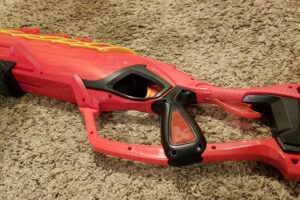 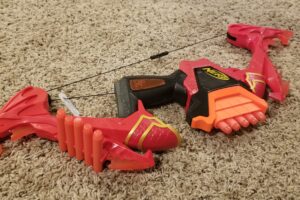 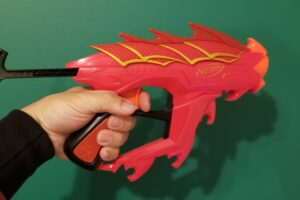 The Dragonpower blasters look GOOD. They’ve got the red dragon vibe down, from the red plastic with scales molded into it to the translucent spikes and grip plates. They even come with red darts. Because of course you’re spitting fire, you have the power of a dragon in your hand! At least that’s what they’re going for.

All three blasters have room for extra dart storage, when reloading is needed. The Emberstrike has a compartment hidden in the stock, while the other two have dart holders on the outside. This makes for a much easier time in combat.

The Emberstrike is the largest of the bunch, with a full stock, pump grip, and eight dart cylinder. The Skyblaze is a bow-style blaster; the string pulls back the plunger, and that fires air through a five dart smart AR. The Fireshot, meanwhile, is just a single shot, pull-back pistol. All things considered, none of them do anything new. They just do it in style!

Of the three, the Skyblaze is probably the least user-friendly. Practice makes perfect, but since it doesn’t work like a real bow (flexing the arms and firing an arrow), firing it feels a bit unnatural. Aim also has something to be desired. The other blasters fit the hand well, and are easy to use and aim.

The blasters are as follows:

There’s nothing too unexpected about these blasters on the inside. But in case you want to tear them apart, here’s how the pieces fit together! 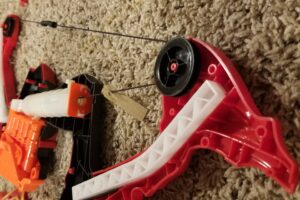 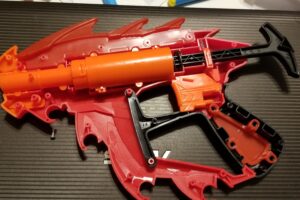 The Dragonpower line is a fun way for Hasbro to combine their IPs into new products. After all, they own Dungeons and Dragons, and they don’t have to pay anything to use that license for other toys! The end result is a mostly good set of blasters, which all look great. The Skyblaze is the weakest of the bunch in terms of user friendliness, and the Emberstrike (if not on sale) is a bit much for just eight shots. But with all the plastic and detail involved, the prices can at least be justified.

It’s a line worth looking at, and at minimum you should buy the Fireshot. It’s hard to go wrong with a standard pistol with dart storage and DRAGON SCALES.