Long ago (2007), Nerf released the N-Strike Disk Shot, a device that threw targets into the air for dart aficionados. For $50, you got a large base, six targets, an EX-6 Element blaster, and a remote control for firing the discs. It was a fun experience, provided you had an outlet nearby for the AC adapter (as well as high ceilings).

14 years later, Jazwares has made their own version under the Nerf name. The discs are smaller, the base is battery powered, and no remote (or blaster) comes with it. But for $35, you can relive the good old days. And it does the job well!

The original N-Strike version was fairly bulky, al. Things considered. The Skeet Shot, meanwhile, is smaller, both in terms of the base and the targets. The five target discs load via a door on the back; a spring-loaded plate pushes them forward for launching. Four D batteries go inside the base.

There is a safety switch on the base, which is supposed to ensure you’re setting it on a flat surface (as opposed to trying to use it like a blaster). Trying to use this as a blaster wouldn’t work anyway, due to the launch sequence and spin up times needed. Granted, I’ll end up probably trying that anyway, but for normal people, it’s enough to ensure proper operation.

After flicking the ON switch and setting the device down, you can use the buttons out front to activate it, as well as choose the firing mode. There are options for straight up, to the sides, or a mix of the two. Once you hit go, the unit will flash for several seconds before firing all the targets, one at a time. There’s a noticeable pause as the launcher registers that there’s another disc in the queue, and then spins up the flywheel again.

The box claims six foot heights. The launcher can easily exceed that, seeing as discs were bouncing off of my ceiling. While this is meant to be an indoor toy, it may be better to take it out on a nice day, set it on a wood board, and get the full height possible. 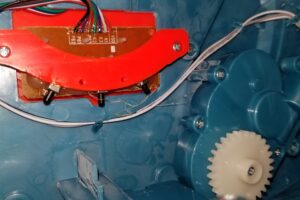 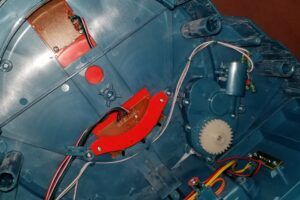 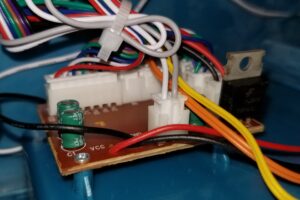 Of course, being me, I have to look inside to see how this thing works. The launch mechanism itself is a rotating piece, with a motor and three position switches for control. Another motor mounted on the side spins the flywheel. It also appears to be connected to the pusher mechanism – I have yet to open the gearbox to see how, exactly. But presumably there’s a sector gear somewhere, lifting the disc up to make contact with the flywheel, and once that happens, a spring resets the pusher.

I’m tempted to start rewiring the launcher, and finding a replacement motor to speed things up. But I imagine I’ll have to do a few workarounds – if I hook up a lipo battery, I’ll need to step down the voltage going to the control board. And the power transistor on the board certainly isn’t built for running our aftermarket hobby motors, so I’ll need a relay to let me just dump power straight from the battery to the flywheel motor.

The Nerf Skeet Shot Disc Launcher is fun to use (assuming you have high enough ceilings), and the discs stand up fairly well to hits from all kinds of stock blasters. The targets may be narrower than those of the classic version, but that just makes for a challenge! And with how hard and accurate some blasters can shoot these days, it’s a challenge worth accepting.