About a week and a half prior to this review, the Jurassic Pro appeared on select Walmart shelves in Texas. Thanks to a friend down there, I was able to get one in the mail. Now, after lots of time testing (both on a workbench and on a playing field), I’ll gladly add to the hype. The Jurassic Pro isn’t the pro blaster we expected, but it’s definitely the pro blaster we needed,

License to be Different

Setting the functionality of the blaster aside for the moment, this is a significant development; Prime Time Toys/Dart Zone never does cross-promotional blasters! We’ve seen them from Nerf, Buzz Bee, Mattel (RIP Boomco), and even Lanard. As such, Dart Zone doing a promotional blaster for Jurassic World Dominion, of all things, is a major step.

The blaster is modeled after a tranquilizer gun in the movie universe, though it features a much brighter color scheme (for obvious reasons). It also takes fun liberties, such as using translucent orange plastic on the stock and putting a mosquito inside to evoke the “bug in amber” of the original movie. The paint on the sides, with the movie logo, is super detailed. I’m not sure what process is used for doing this, but it makes it look less like it’s painted and more like an integral part of the plastic. It’s really good, and it contributes to making the blaster feel like far more than a cash-in. 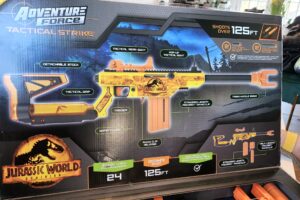 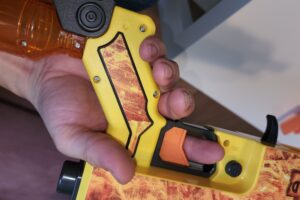 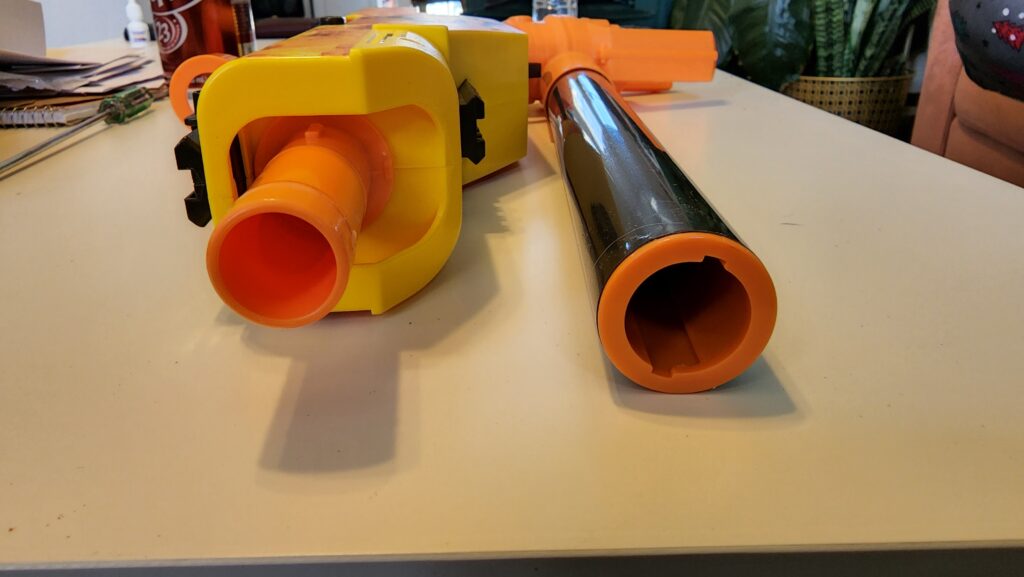 The blaster is ambidextrous, with a bolt handle that can screw in on either side. A safety sits in front of the trigger. The attachments (stock, barrel, iron sights, etc) all can be attached and detached freely. So if you don’t want the barrel, just leave it off! At least until a friend of yours starts chasing you around in their T-rex costume…

Fully assembled, the stock sits at a nice length for a 5’10” adult like me. The handle, while featuring some angular molding, is unexpectedly comfortable to grip and use. The force needed for priming is in line with other pro blasters. There is a bit of wobble where the stock attaches, but nothing severe (and certainly not blaster-breaking). In any case, that joint can certainly handle the spring the blaster comes with. 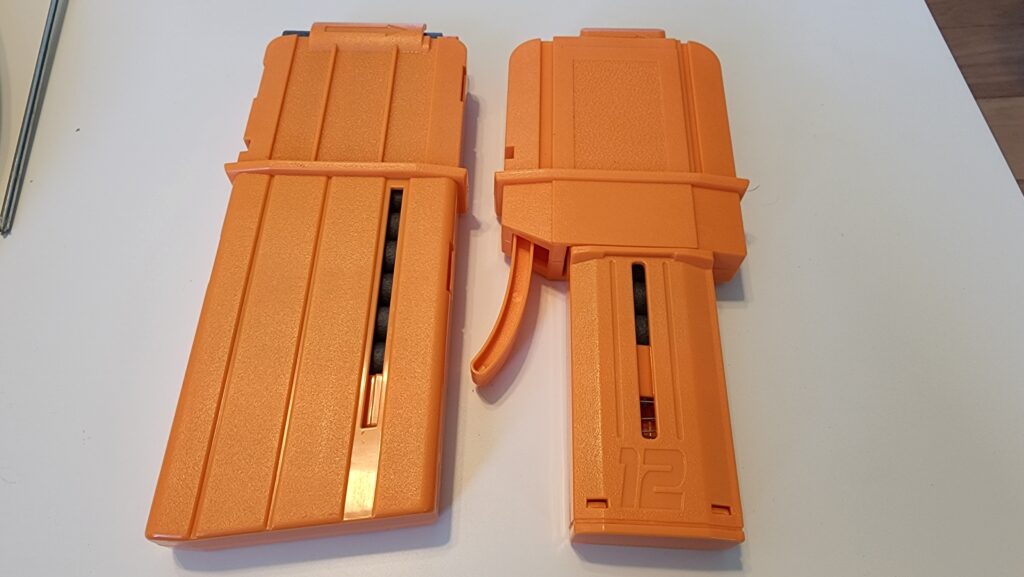 The Jurassic Pro fires both full-length and half-length darts (and ships with 12-dart magazines for both types). Velocities are in line with other pro blasters; I averaged 137fps with the included full-length darts (and 152fps with half-lengths). As a bolt action blaster, the Jurassic Pro won’t have the highest rate of fire. I’m sure you could practice and fire faster, but firing at one dart per second is both doable and comfortable (as well as giving a little time to aim).

Speaking of aim, hitting targets with the Jurassic Pro is a breeze. Even when I downgraded the blaster with a different spring to fire under 130fps, darts generally went where I wanted them to go.

Speaking of firing under 130fps…here’s some extended footage using the blaster in a ~45-minute mission of Humans v Zombies. Talk about sniping targets!

The Jurassic Pro has the setup you’d expect, with a two-part breech allowing the use of both half and full-length darts. It is different, however, in one aspect: the plunger tube has a large oval cross-section! 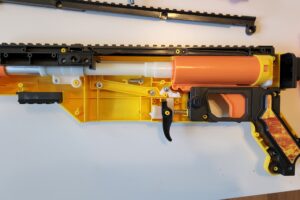 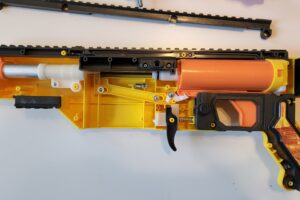 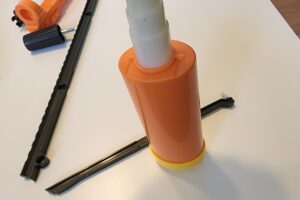 The catch mechanism sits on the back of the yellow plunger tube cap. That cap is clipped onto the tube on both sides, and it is HARD to remove without stressing the plastic. Eventually, if you open it up too many times, those tabs break. Given the support the plunger tube has within the blaster, however, that may not be a big deal.

What is a big deal is the spring size. I measured 24.5mm OD, 20.5mm ID, and 102mm length (the spring is compressed a bit inside the plunger tube). It’s hard finding springs that will fit, due to the existing spring rests and space behind the plunger head. I’m still testing, though!

The Jurassic Pro came out of nowhere, and I’ve basically fallen in love with it. Doing a movie blaster lets Dart Zone expand their pro blaster options even more, and gives enough justification to throw a fun bolt-action mechanism into the mix. The rate of fire will never be stellar, but everything else about the blaster certainly is. I look forward to when these blasters finally appear on Walmart shelves nationwide – $65 is a great price for a pro blaster with an official license, especially one that’s made this well.