Author’s note: I found mine at ToysRUs Canada. Once it appears on US shelves, I will update the price information!

I’m unsure of a good niche for the Elite 2.0 Ranger. As far as stock blasters go, it’s perfectly serviceable. Five shots, pump-action priming, and slamfire are all in the package. It hits typical Elite ranges, as well. Even so, it sits in a weird, in-between place – especially when so many revolvers with five or more shots exist, with comparable performance for less money. Will kids enjoy it? Of course. Is it the best option? Debateable. 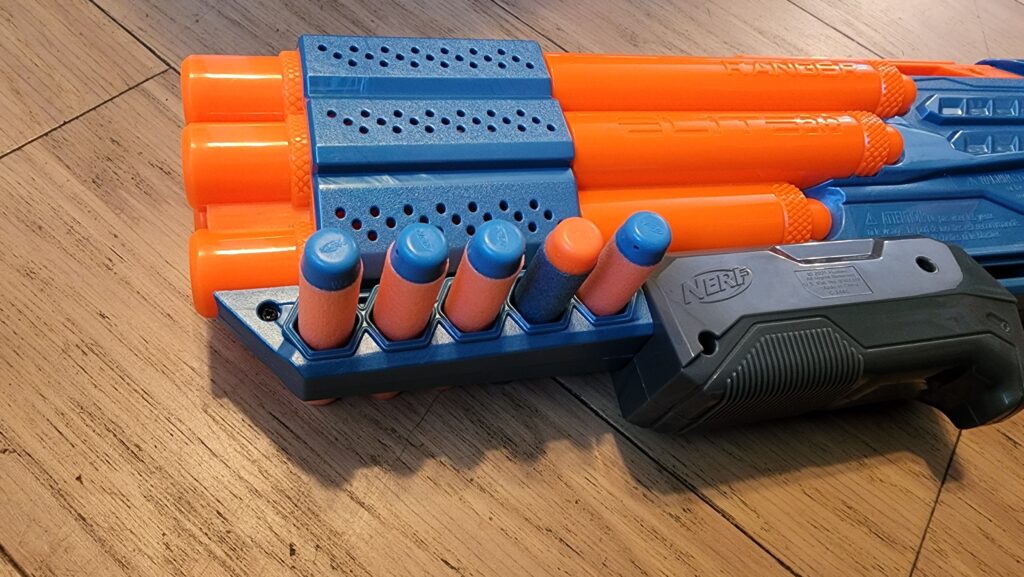 The Ranger is an interesting blaster to look at. It’s quite long for only having five shots (the extra darts can be stored in the holders up front). It has a serviceable pump-action grip; since we’re operating an Elite blaster, as opposed to Rival or another type, you don’t need much force to prime the blaster. There are basic sling points on the grip and the top of the blaster, along with a single tactical rail. Should you desire a stock, there’s an attachment point for that, as well. While the blaster fits in with the general Elite 2.0 aesthetic, I do like the faux extended orange barrels on the sides of the blaster. That really helps fill out the sci-fi look and makes the blaster look good in hand. I honestly think this would be a great base for a cosplay item.

Operating the blaster is simple. After loading the darts, you pump the priming grip, then press the trigger to fire. Alternatively, you can slam-fire all five shots! Note that to use the shortest route possible between barrels, the smart AR (when looking at the blaster from the front) starts with the top left, goes clockwise through the top four barrels, then does the bottom last. 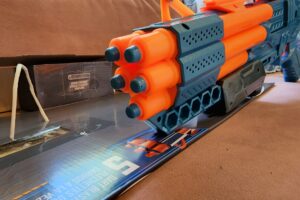 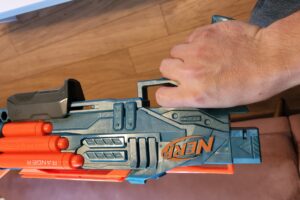 Even with a five-shot smart AR, the blaster performed better than expected. The first shot hovered around 66fps, while the second fell between that and 70fps! Subsequent shots trail off after that but still hit at least 60fps. That’s quite odd behavior, compared to other blasters that use the smart AR mechanism.

As for the rate of fire, slamfire made it easy to fire off all the darts in short order. You can easily hit three darts per second with the blaster. Of course, you’ll have to reload after using all five shots! 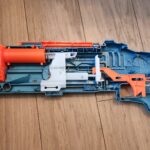 The Ranger doesn’t really have many surprises on the inside. The internal mechanisms are spread out to match the length of the blaster, but otherwise, all the parts are there. Interestingly, there is a single air bleed hole at the back of the first barrel.

My suspicions? Trying to put five darts into a smart AR while being “Elite” was asking too much of the system, so the solution was to give the blaster slightly more power but “Nerfing” the first barrel to compensate. That would explain the more consistent performance compared to other smart ARs, and why the second barrel liked to shoot harder than the first.

In classic Elite 2.0 style, there’s no o-ring and a focus on less metal parts. There were some clips holding the blaster together in addition to the screws, but they were easy to pop open.

The Ranger is fun to use, especially in stock-focused wars and arenas – I’ve used it at a local arena and had a great time. But at $24CAD (about $20 USD), there are a ton of blasters with higher capacity, higher velocities, or the same capabilities in a smaller or cheaper package. By all means, if the blaster appeals to you, get it. It’s just in a weird area where I’m not sure it’s needed.