The Armorstrike has me conflicted. On one hand, it captures the spirit of Dinosquad, with a fun shell and design aesthetic. On the other hand, the blaster is inferior to the previous version of this type (the Dragonpower Emberstrike), with a faulty slam-fire mechanism and some odd design decisions. Until the slam-fire gets fixed, the blaster isn’t worth the money. 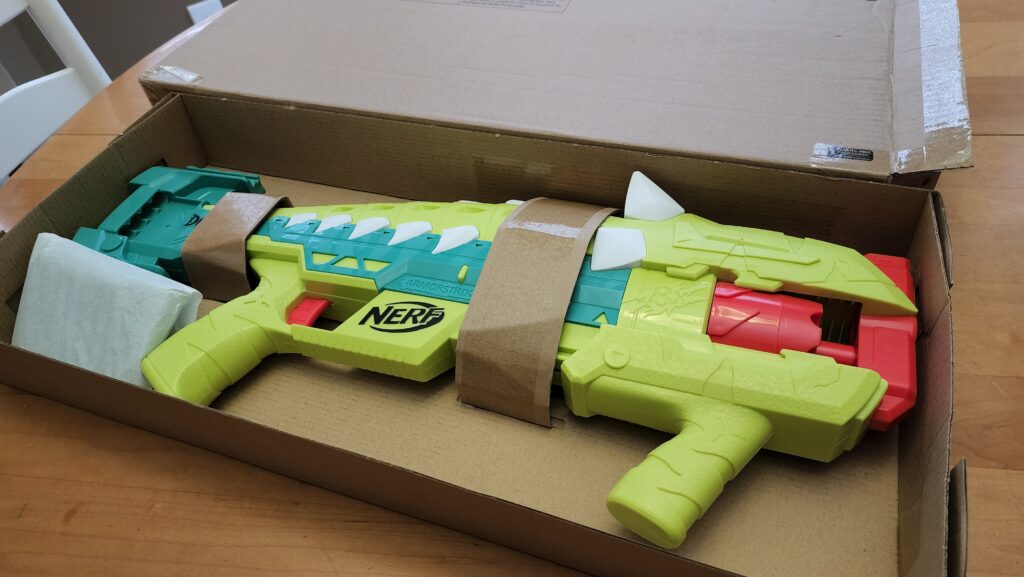 The Armorstrike (at least the one that comes from Amazon) ships in a simple box, with the blaster and 16 darts. As far as Amazon is concerned, “Box art? Where we’re going, we don’t need box art!”

The Armorstrike is modeled after an ankylosaurus, complete with spikes (just shell deco, not actual spikes) and a club-shaped tail. Well, club-shaped stock. The designers made the best of the situation, making a stock large enough to store eight darts for a full reload. Oddly, there are two tactical rails on the stock – this seems like an almost useless addition. Perhaps if you have ammo storage attachments, you could put them there. But given that the large rectangular tail is already uncomfortably against your shoulder, I don’t know if even that would be recommended. Also, not moving carefully means the tail rubs against the back of your grip hand. That could be irritating after a while. If anything, making the stock a little longer would have gone a long way. 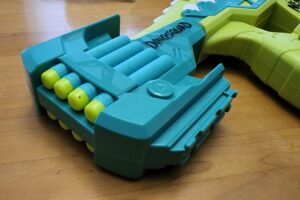 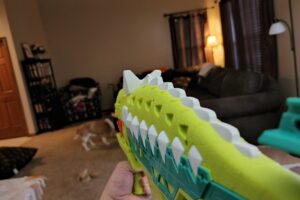 The general operation of the blaster is easy. The main grip and trigger are comfortable, and the priming grip is adequate. That being said, the vertical part is a bit short. It’s most likely fine for the target audience (children), so in this case, it’s just a minor annoyance. The cylinder holds eight darts, and it can be easily rotated by hand for reloading. The two “eyebrow” spikes serve as a rough iron sight,

The Armorstrike I tested averaged 70fps with the included darts, with a rate of fire of about three darts per second with slamfire. HOWEVER, that’s due to finding a sweet spot for holding the trigger. Normally, you just hold the trigger down on a slamfire Nerf blaster, and then just pump repeatedly to shoot. Doing that with the Armorstrike, though, resulted in the plunger not even catching, so darts ended up flying lazily out the front. We’ll check the internals in a moment.

The end result, though, is an unreliable slamfire mechanism that sometimes doesn’t catch, and will be counterintuitive compared to other blasters.

The Armorstrike differs a bit from most Nerf cylinder-fed blasters, in that the rotation mechanism is molded to the outside of the cylinder. Given the pump-action setup, it’s easy to simply mount the ratchet arm in the same area. A spring-loaded detent serves to align the cylinder. Undoubtedly, this makes for an easy-to-manufacture blaster. But it should also make it easier for modders to design new cylinders to 3d print, as well. 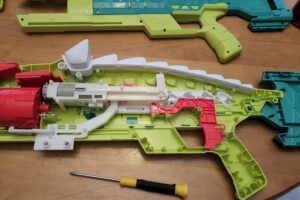 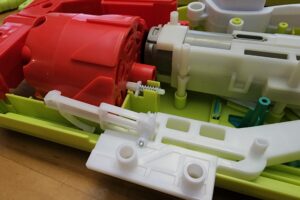 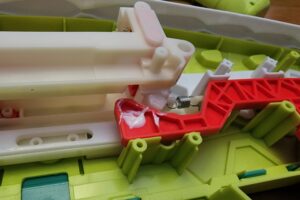 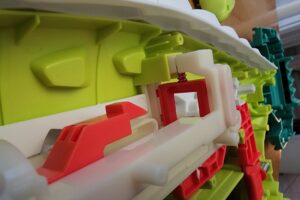 As for the slamfire issue, the mechanism is clearly there. A spring-tensioned assembly sits under the catch, and it SHOULD slide out of the way whenever the priming grip is in motion. There’s even extra grease in the area (that’s from the factory, not me). Even so, holding the trigger down all the way (the logical thing to do) ends up applying enough force to prevent this motion from occurring. As a result, the catch stays lifted. There’s a sweet spot in trigger placement that works, but it’s hard to locate and maintain during combat, so for all intents and purposes, slamfire doesn’t work.

I’ll have to take some time to further explore the issue. Perhaps changing a few surfaces would allow that assembly to slide out of the way properly? Maybe we should just add a piece to stop trigger movement early, to line up with that sweet spot. Either way, Hasbro needs to tweak this design.

I want to like the Armorstrike. After all, DINOSAURS! But there are enough things wrong with it that it should just be avoided for now. The Dragonpower Emberstrike is essentially the same thing (just with a different theme), and it works flawlessly. So if you really want a themed, cylinder-fed primary, choose that instead. If you just want performance, though, $32 can get you much better elsewhere.