Buzz Bee Toys usually has a new soaker each year, be it a derivative of a previous model or something new. In the case of the Adventure Force Spiral Blast, it’s a bit of both. Buzz Bee usually has some pump-to-shoot models – that part isn’t new. Here, though, there’s an interesting mechanism for producing the “Spiral Blast”. At the very least, it makes for an entertaining soaker for the kids, while still competing with most things currently in the market.

IT’S COOLER WHEN IT SPINS

The big draw of the Spiral Blast is the, well, spiral blast. The blaster has two nozzles, producing two rotating streams. Usually, though, we don’t see the mechanism for accomplishing that spiral, be it directly powered by the user or a result of the water flow. Showing the mechanism is always a plus when it comes to user appeal, and Buzz Bee Toys takes advantage of it here.

The mechanism itself is simple. The nozzles and the stem leading to them are all one piece, but the stem has a spiral molded into it. Water flows down the middle (with a seal at the back, or course). There’s a physical extension of the pump wrapping around that stem, with a spring-loaded tooth. When the user pumps to fire, the flat side of the tooth rotates the entire assembly, producing the twisting streams of water. Afterwards, when pushing the pump forward, the sloped side of the tooth lets you move the pump forward, resetting everything.

The main grip is plenty large, and it features a cosmetic trigger that’s simply there for show. The shell features lots of contours, and I’m a fan of the green, purple, and orange color scheme. 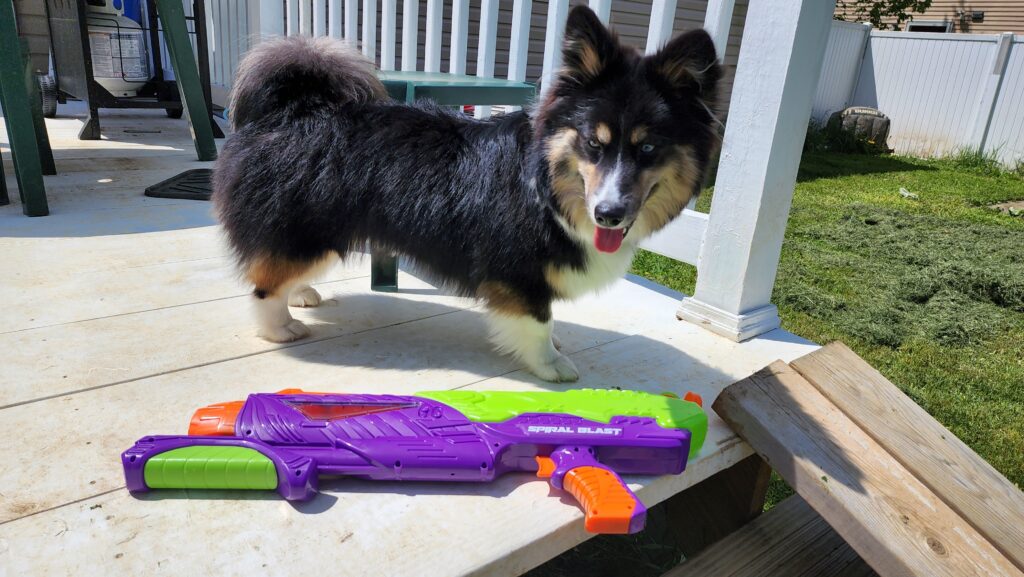 The Spiral Blast claims ranges of 34ft, along with a capacity of 38 fluid ounces. The latter is accurate, though if you’re feeling ambitious, you can fit a bit more in the reservoir after getting all of the air out and closing the lid when full.

The former claim seems to be accurate – I did indeed get some water to land up to 34 feet away. However, the rotating streams don’t seem to maintain their cohesiveness over a long distance, so at that range, it’s a cloud of droplets instead of two streams of water.

Being able to see the operating mechanism always adds points to the user experience, For battle, though, the Adventure Force Spiral Blast is average. If you’re wanting to truly soak someone at a distance, there are better options.

The close quarters shots do look pretty sweet, though!