One small caveat to this review: I was able to acquire one of these blasters early, and a few others have as well. I don’t have definitive numbers from their blasters, though I hear good things from them. However, my Ranger experience is, thus far, somewhat disappointing.

Was I simply unlucky? Or are there quality control issues? We won’t know until the blasters appear on shelves en masse. But given Dart Zone’s on-again, off-again relationship with ball-blasting performance, anything is possible. At the very least, $10 buys you three shots, when previously it could buy you six and storage. 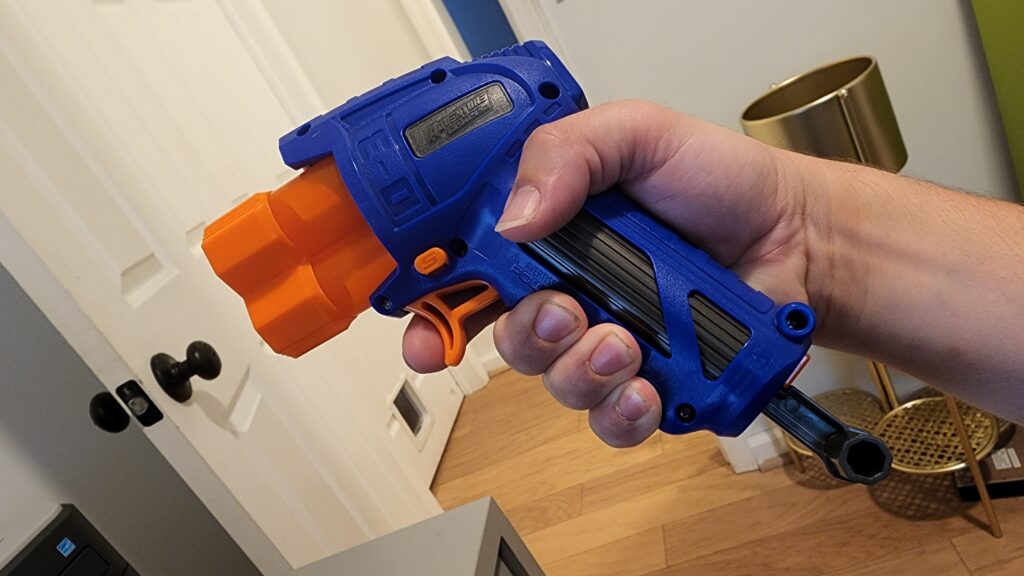 Back in 2016, Dart Zone introduced the Trifire dart blaster. It was a handy little backup blaster that indexed on the prime and performed quite well. This year, the idea has been scaled up and put on Walmart shelves as the Adventure Force Ranger. Now, instead of darts, it fires balls.

The Ranger features three barrels (all with their own hop-up tabs), which load from the front and (still) index on the prime. The main trigger sits below that, with a safety situated in between. The priming handle sticks out the bottom.

When pulling the handle, the priming bar also pulls an orange plastic piece. This connects to the rotation mechanism. So far, the blaster has indexed accurately every time – quite a feat for such a compact ball blaster.

With the plunger volume necessary to launch Rival-type ammo, the grip is a bit…large. Smaller hands will find it uncomfortable, but for teenagers and adults (the target audience), it’s usable. Perhaps not long periods of time usable, but usable all the same. Given the sort of blaster it is, an ultra-comfortable grip isn’t the highest priority. 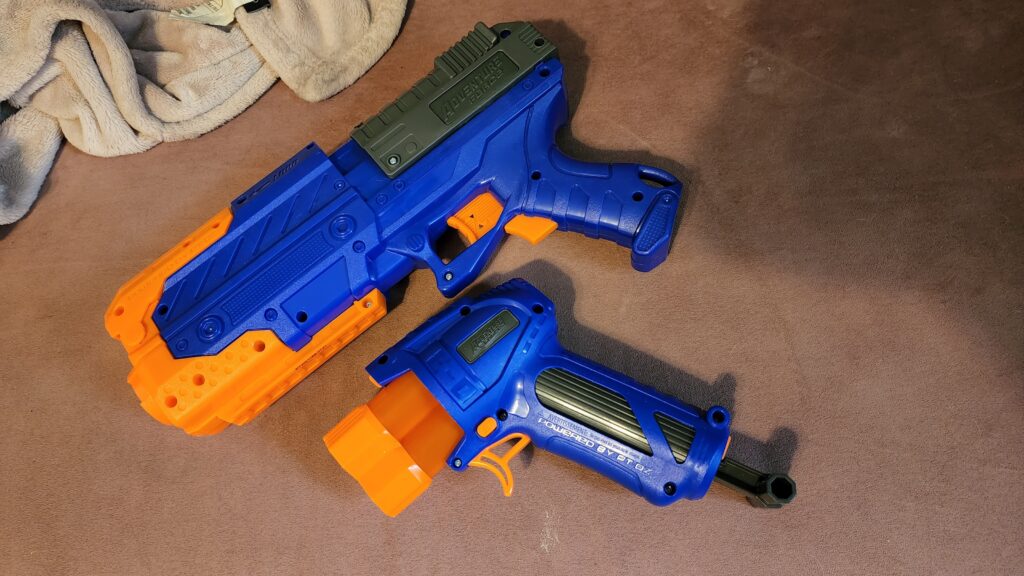 Unfortunately, in my testing, the Ranger was less than stellar, averaging only 73fps! This is a far cry from the 90-100fps range we expect from most ball blasters on the market. In fact, it’s somewhat reminiscent of other AF ball blasters that have been released; both the Sentry X2 and the Liberator fired weakly in their initial forms, only for later product runs to have sealing issues fixed. Coincidentally, you can still find the Sentry X2 on shelves…for the same $10 price as the Ranger…but with double the shots, storage for two more rounds, and standard performance.

Additionally, at least on my unit, the hop-up didn’t seem to have any effect. Even with the dual-color Nerf rounds, rotation seemed minimal. Others have reported too much hop-up, though, which makes for an odd contrast of experiences.

Yeah, even if the stated goal was “backup blaster”, the Ranger didn’t meet expectations.

On the bright side, you can fire all three shots in two seconds, should you really need to do so. Compared to the breech system of the Knockout, that’s much faster.

The Ranger really is a scaled-up Trifire. A three-pronged wheel at the back of the cylinder is what’s used to align the barrel. The large orange assembly behind the plunger rotates that wheel, while a spring-loaded indent serves as the resting place for each of the three prongs. 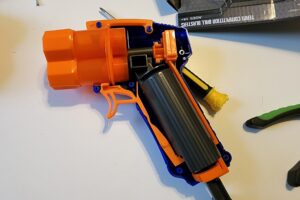 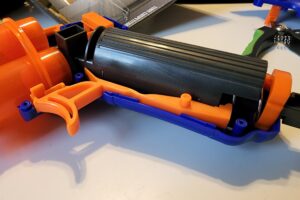 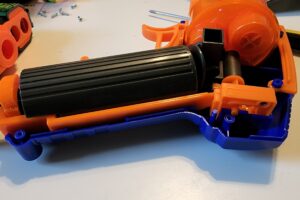 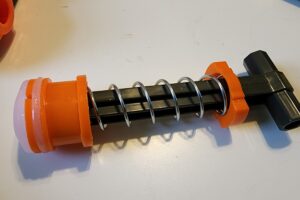 Notably, the cylinder on my unit doesn’t exactly seal against the plunger. Yes, there’s a foam surface to make a seal, but there’s nothing pressing those surfaces together. Maybe I have tolerance issues? It could also be the plunger seal itself, as some acquaintances of mine can seal off the barrel, fire the blaster, and wait several seconds before the plunger finally returns to the resting position.

I sincerely hope my Ranger was a fluke. If that turns out to be the case, I’ll gladly update the review. Until then, though, it’s underwhelming. Three subpar shots for $10? For the same price, at the same store, you could fire six shots at greater velocity. For $10 at a different store, you could fire five shots in style (using the Apex revolver). Even if the Ranger had typical ball blaster performance, other items on shelves would be a better deal. It’s fun to use, and it’s a lot more compact than things like the Sentry X2 or Kronos. As such, there are some battle situations where it will be appealing. Overall, though, for most consumers, better options exist.