Of the entire Skins line, the Last Stand is the largest. It’s the primary of the line, holding 14 shots in a pump-action format. It also has the biggest canvas for the various paint schemes Xshot has decided to produce. For $20, it looks and feels great. Are there other objectively better options? Yes. Are there any with as much style? I’d say no.

The Last Stand, operationally speaking, is similar to the Xshot Turbo Fire. However, a few things set it apart. First, there are few shots available: 14, compared to the 20 in the Turbo Fire. However, at least in my experience, the slam-fire on the Last Stand is effective and works every time. In the Turbo Fire (at least originally), the slam-fire could get hung up (I assume this was fixed in later versions, but have yet to check two years later). Note that the slam-fire launches the dart at the rear of the priming motion.

Of course, the major difference is the deco on the outside of the blaster. There are at least five paint schemes available in the United States, ranging from Dragon to Game Over to what I assume is the US-exclusive Defense Force. After all, it’s a bit hard to market a blaster with American flag details, a bald eagle, and dog tags in other countries!

I picked the Dragon scheme while I was at Target, simply because it looked really cool with the red scales, flames, and painted spikes. Come to think of it, it’s a Target exclusive, the same store carrying the Nerf Dragonpower blasters…coincidence? Hmmm.

No matter the paint scheme, it’s the same piezoelectric paint process used to apply color to all the plastic on the sides and top of the blaster, and it looks like someone took a high-quality inkjet printer to the shell. In addition, some of the textures on the top rail and the stock give off a carbon fiber feel, adding to the whole experience. 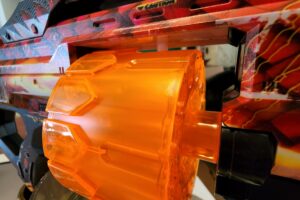 The priming grip is solid, the motion is smooth, and the thumbhole stock is quite comfortable. The stock is also long enough that, for adults at least, it’s reasonable (obviously, for kids and teens it should be great). The top rail is, in fact, Picatinny, should you wish to mount something there.

The Last Stand did quite well in my testing, hitting 78fps on average with the included “Air Pocket Technology” darts. In addition, slam-fire made for an easy four dart per second rate of fire. Accuracy seemed acceptable with the new darts; I swear, I’ll set up a real test for them soon!!! 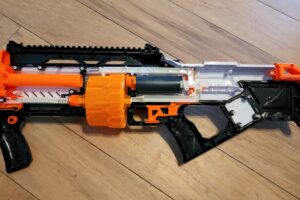 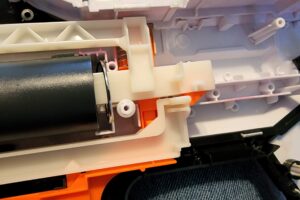 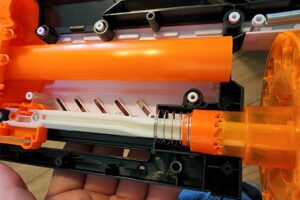 On the inside, the Last Stand is fairly simple to understand. How Zuru decided to implement some things is worth noting, however.

For $20, the Xshot Skins Last Stand offers quite a bit. 14 shots aren’t the most you could get (Villainator takes the cake there), but 14 is both acceptable and more than you’d get from Nerf. The dart velocity is really good, though again not the most you could expect. However, the blaster does have slam-fire. And, perhaps most important of all for this line, it has style. I can’t give the blaster top marks across the board, but when it comes to the overall value, it’s a steal. The fact remains that while Nerf has been the top dog in the market, companies like Zuru have been pushing both innovations and low price points.