If there’s one thing Xshot is known for, it’s consistency in product design. Even with new lines, the blasters are essentially the same as before (even if they’re objectively better in looks in utility, as per the Dino Attack line). The Fortress falls into this pattern; it’s objectively not much different from the Turbo Advance. Even so, $25 for 40 shots is hard to argue with. A high-capacity blaster is a must for any collection, especially if you have HvZ or close quarters combat in mind. 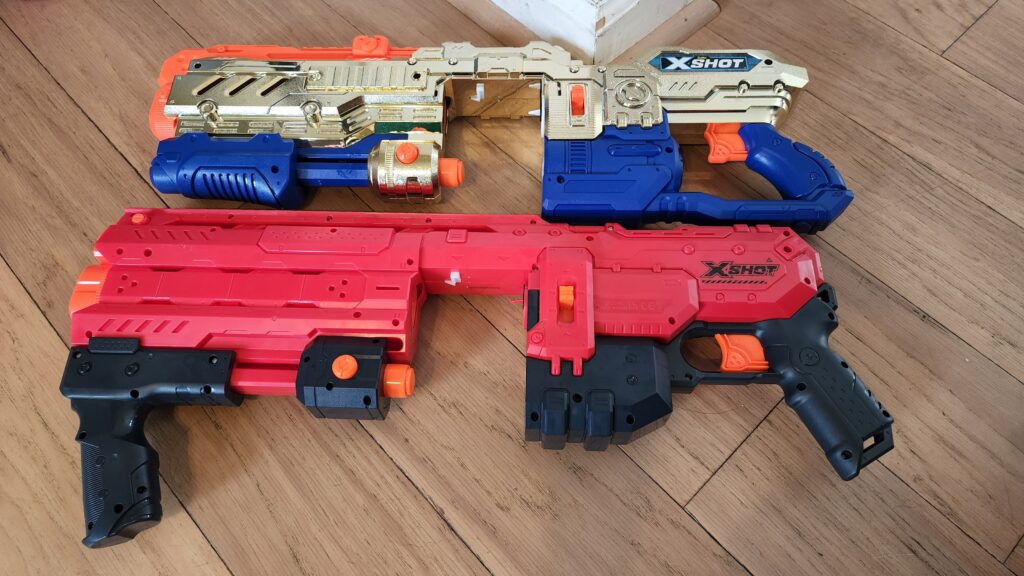 Otherwise, the Fortress has all of the same features. The 40-dart drum has two rows of darts, which can be selected via a toggle on the left side of the blaster. Ideally, you can use one ring of darts while reloading the other. Of course, if you end up needing to fire all the darts in rapid succession, the drum itself can be swapped out. Yep, it’s the same style drum as before, so if you have multiple drums, you can carry multiple drums for a quick reload. 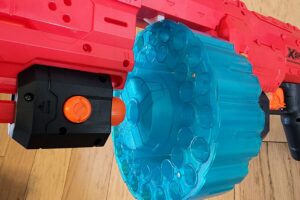 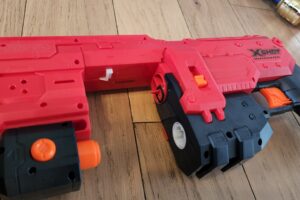 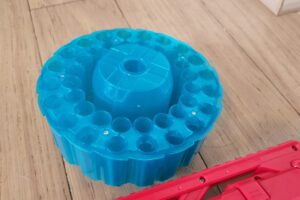 The blaster does everything the Turbo Advance does; pump the priming handle, pull the trigger, and fire. There’s no slam-fire here, just massive ammo capacity to sustain you through battle. Firing the blaster gives a nice “pop” sound as the dart fires and the air restrictor valve closes (more than one person at a war has made this observation) – there’s plenty of power to spare.

On average, I got 87fps with the included Excel darts, and closer to 80 with typical Elite and waffle-type darts. In terms of the rate of fire, firing two darts per second is as fast as the blaster reliably goes, given the lack of slam-fire. That’s not as fast as other blasters on the market, but quite frankly, this blaster focuses on capacity rather than the rate of fire.

Since I got to use lots of new blasters at a recent war, you get to see me use the Fortress during a round!

Internally, not much has changed. However, it should be noted that the placement of the screws in the blaster shell has changed drastically. Most of the screws are on the left side of the blaster. However, once all of those have been removed, you have to flip the blaster over, remove two more screws (one for the drum retention mechanism, and one just behind where the drum sits, and then pop the shell apart. 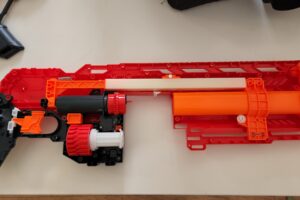 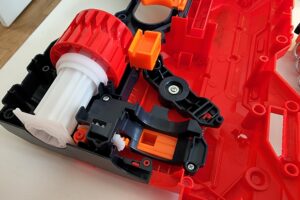 Inside the blaster, you still have the same size plunger tube, as well as a spring-loaded (and o-ring sealed) connection between the plunger tube and the drum. A lever connects the priming mechanism to the rotation gear. All the while, a different set of gears links the drum seal to the selector switch; this rotates the position of the red plastic piece to fire either the outer or inner ring of darts. It’s still an ingenious solution to maximizing ammo capacity, and one that Xshot isn’t likely to abandon anytime soon.

Like the Turbo Advance before it, the Fortress excels at capacity and close-quarters combat. You may not be able to squeeze much more range out of it, but you don’t really need to do that. In stock form, it’s perfectly functional for most consumers, and the red/blue plastic color scheme works well. $25 isn’t a lot to ask for when it comes to a great starter blaster for Humans v Zombies or other game types.