Dinosaurs are all the rage with kids. Nerf has had the Dinosquad line for a while now, and Xshot has carried a few blasters under the Dino Attack name. When it came to the latest Jurassic World movie, though, Walmart was able to secure the rights to get JW-themed blasters, and had Prime Time Toys (Dart Zone) design and make the blaster. The first, the Jurassic Pro, was powerful, fun, and worth the price.

Sadly, the second blaster (the Pyroraptor) does not live up to those standards. In theory, everything should work. But between inconsistent shot velocity and large numbers of jams, I can’t recommend it. 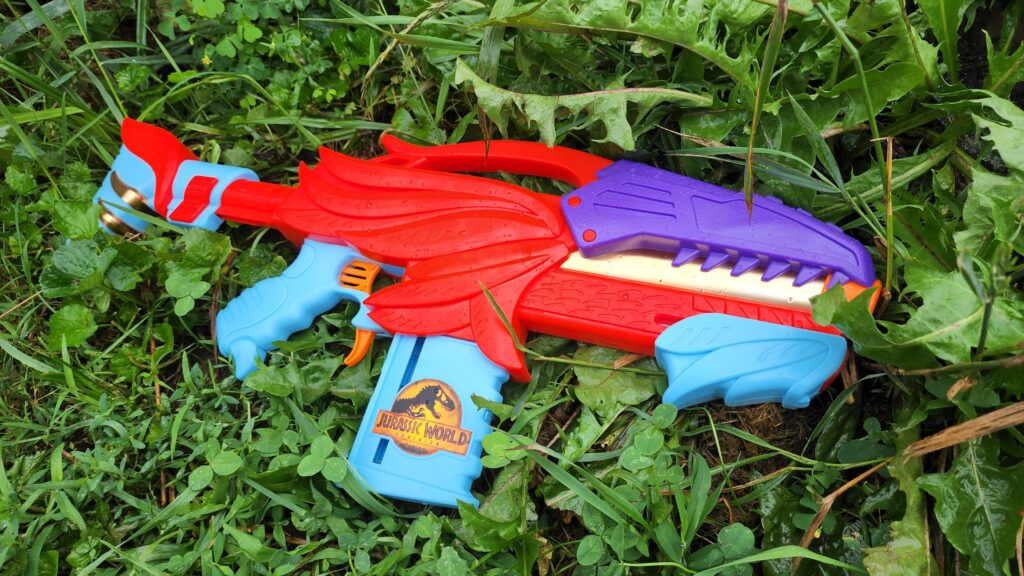 In Jurassic World: Dominion, the Pyroraptor is one of the many obstacles the characters have to get past. It’s red, has feathers, and apparently likes the taste of humans. The blaster design tries to reflect this, with complex shapes and indentations in the molding. Of course, there’s only so much you can do while keeping a blaster in the necessary layout…but the bits and pieces are all nice. The main grip has a claw on the bottom. Large feathers sweep backward from the head. The top of the head has teeth sitting over the gold-painted barrel. All the little pieces help reflect the inspiration, even if it relies mainly on the molding.

Notably, there is no jam door. 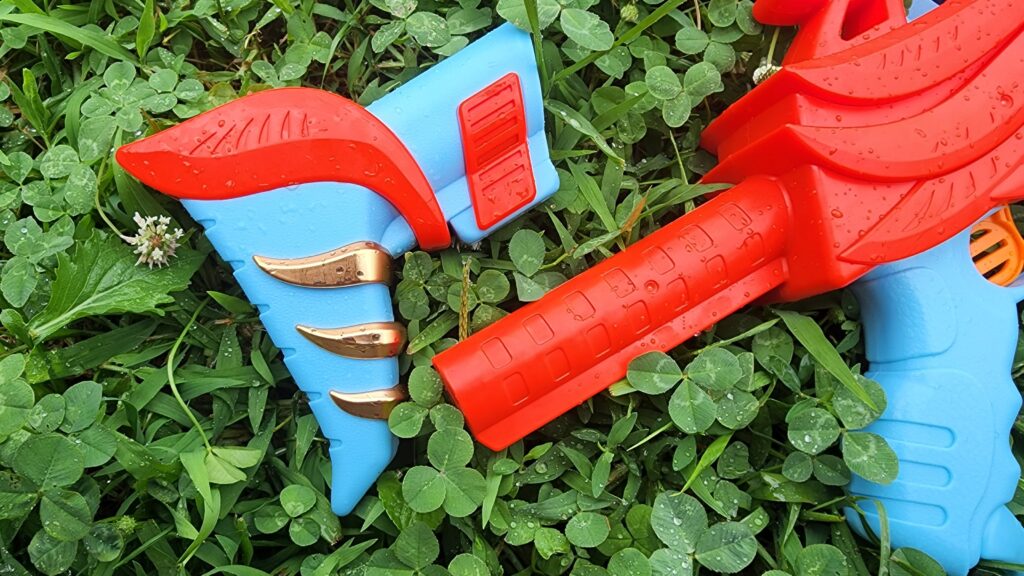 The back of the blaster features a buffer tube mount, along with an adjustable stock. You have to push down on the red tabs in order to move the stock, which is a bit counterintuitive (most stocks have some kind of lever in place so that you depress a button into the stock). Even so, it works, and it’s nothing that will affect you in battle. It could be a bit longer for my taste, but for a kids’ toy, it’s perfectly fine. The rest of the blaster is comfortable to hold and manipulate.

Blaster operation is simple: insert a magazine, prime with the pump grip, move the grip forward to chamber the dart, and fire. Interestingly, this blaster has a unique design allowing mags to be inserted at any time. This isn’t a new concept in the world of dart blasting (skinny breeches exist), but the design here is interesting – check out the internals at the end of the review.

Finally, the blaster has slamfire! You should be able to fire off darts fairly quickly simply by holding down the trigger and moving the pump grip back and forth, with darts firing every time the grip is in the forward position. SHOULD. The reality, though, is a bit different. 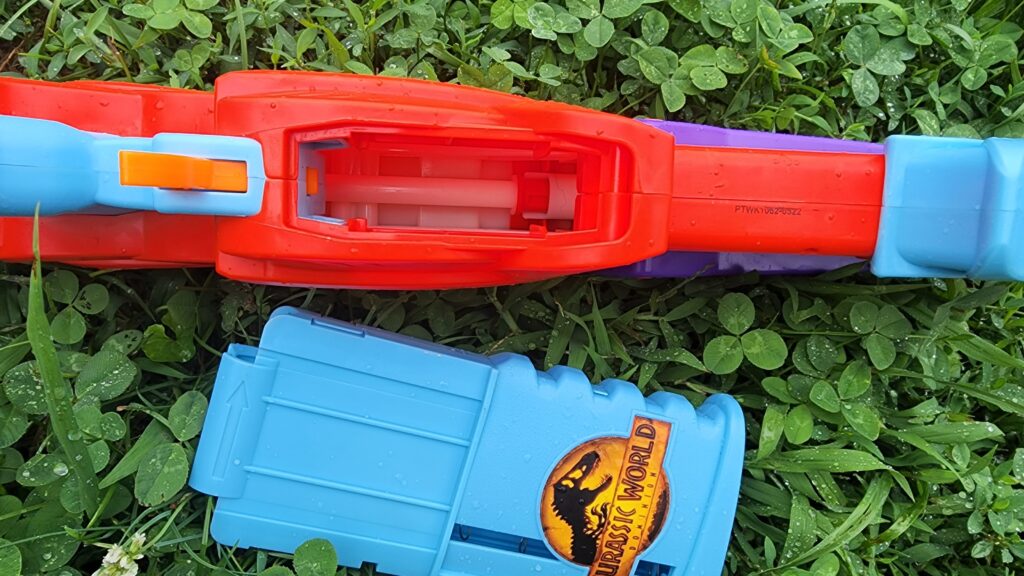 The Pyroraptor, with both the included waffle darts and Sureshot darts (both main types of Dart Zone full-length), liked to jam. A lot. And that’s without priming quickly or using slamfire. And without a jam door, undoing that can take effort if your hand can’t reach the dart to pull it out.

When I didn’t jam, I had an average velocity of 77fps. However, lots of shots were weaker, landing in the 60s. Ammo (even fresh) had a tendency to not load perfectly. Ideally, the ammo sits in front of the breech, with the o-ring sealing it off. Sometimes, though, the very back of the dart gets squeezed in there. That can lead to weak shots or, in some cases, the plunger head stopping partway, and then the dart firing once the breech is opened just enough to free the dart. It’s a problem I recall some people having with the Dart Zone Pro Mk1 originally when using wider darts like Worker darts. In this case, though, Dart Zone darts shouldn’t be having this problem. Perhaps there’s a quality control issue in molding parts of the breech?

In any case, here’s some gameplay footage. Darts do appear to go to the right some of the time. There’s a reason for this.

On the inside, there’s an oval cross-section plunger tube, sitting above the breech. The air goes out the very front, through an angled channel. With all that space underneath, Dart Zone chose to have a thin insert that magazine lips can slide around. That means you can load mags at any time, not just when the pusher is retracted. 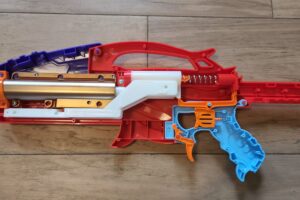 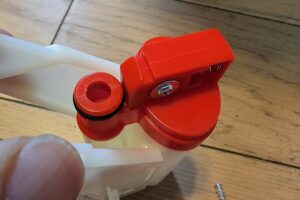 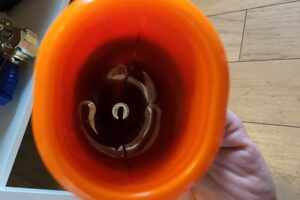 There’s no real priming lock (which is handy in this case, given all the jams), just a small spring-loaded tab at the front of the plunger tube that imparts some normal force to keep the breech from opening. The slamfire operates via a lever with an oversized hole for the pivot point. This allows the lever to slide up and down in relation to the plunger tube’s position, and once you’ve completed the priming and loading motions, it pops back up to hit the catch.

There happens to be a flap in front of the short white barrel. It’s spring-loaded, and moves out of the way during the priming and loading process. It then returns to the starting position if you have something other than a full-length dart in the barrel. This keeps you from firing short darts, or any non-dart projectile. It’s a safety measure, but it would seem that it pushes the tail of the dart when you fire the blaster, pointing the dart to the right. that would explain my observations, but that needs more testing. I’ll update once I’ve removed the tab.

I really wanted to like the Pyroraptor. It seemed like a fun entry for wars or Humans v Zombies games. However, with the one I bought and tested, it’s been a disappointment. Perhaps there are quality control issues with the breech, since not every reviewer has had issues. In any case, I simply can’t give the blaster a good rating. Dart Zone can’t be great all the time, and this is just one of those blasters that fell short.