Dart Zone has updated the entire pro line this year, in conjunction with the Dart Zone Pro Tournament. The Mk1.2 was ambitious, but not quite as successful as it should have been.

In contrast, the Mk2.1 successfully improves upon most aspects of the Mk2, including better performance and the use of in-grip magazines (which can be easily purchased separately). Those who love the Mk2 might be justified in passing on this iteration, but for everyone else, it’s largely an example of what the DZP line should be about: comfortable, easy performance. 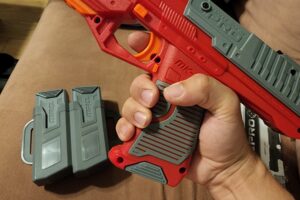 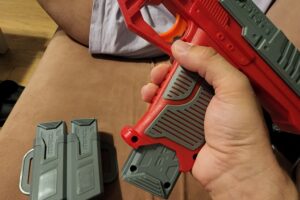 If there’s one thing I don’t like about the Mk2.1, it’s the magazine release. Due to the need to contain a removable magazine in the grip, the grip can’t help but be large. It’s still usable for the majority of people in the target age group, but it leads to a new problem: how do you comfortably swap magazines? 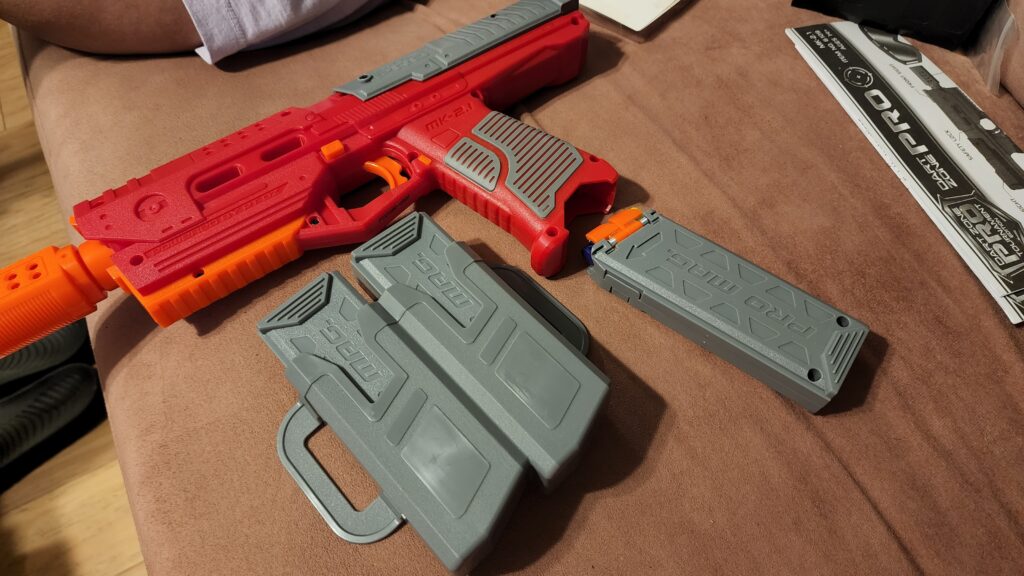 Dart Zone placed a tiny ejection button at the front of the grip, where your thumb could reach it…assuming you have giant fingers. For everyone else, you either have to rotate your grip to reach the button or depress it with your off-hand. Is it a deal breaker? No. But it’s still quite annoying to not be able to easily drop a magazine with your main hand while inserting a new magazine with the other.

On the plus side, the magazine will drop out on its own via gravity. The spring-loaded feed lips provide a little extra oomph to the ejection, as well, if you swap with the breech closed. Yep, you don’t have to prime in order to replace the magazine! 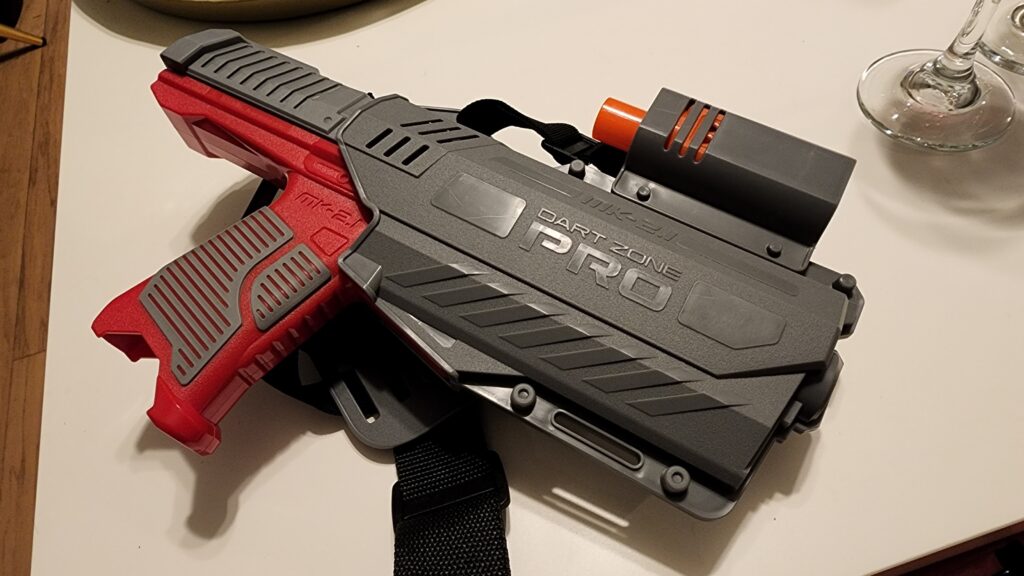 The Mk2.1 is a bit larger than its predecessor in all dimensions. The grip is larger, the priming slide is larger, and the metal barrel is longer. Rubberized surfaces on the grip and slide make handling a breeze, even with sweaty hands. An included muzzle extension doesn’t add to the performance, but it does help make the blaster appear more toylike. As with some other pro blasters, there is a trigger safety that must be engaged before blaster use.

Firing the blaster is a breeze – pull back, return the slide, and pull the trigger. The magazine can be ejected and inserted regardless of whether the slide is pulled back or not. The unique feed lips ok the magazines provide an additional benefit: while you cannot use the old reloading clips, you can still insert darts into the open breech! Given sufficient magazines, it’s not necessarily a feature all people will use. But if there’s a pause in combat, and darts available for scavenging, that option becomes far more appealing.

The Mk2 included a holster and clip storage. The Mk2.1 continues that trend, with both a belt magazine holder and a leg holster (as opposed to going on a belt last time). The holster is made to go on your right leg – no word yet on whether a free 3d printed version for lefties will be made available, as they did with the Mk2. 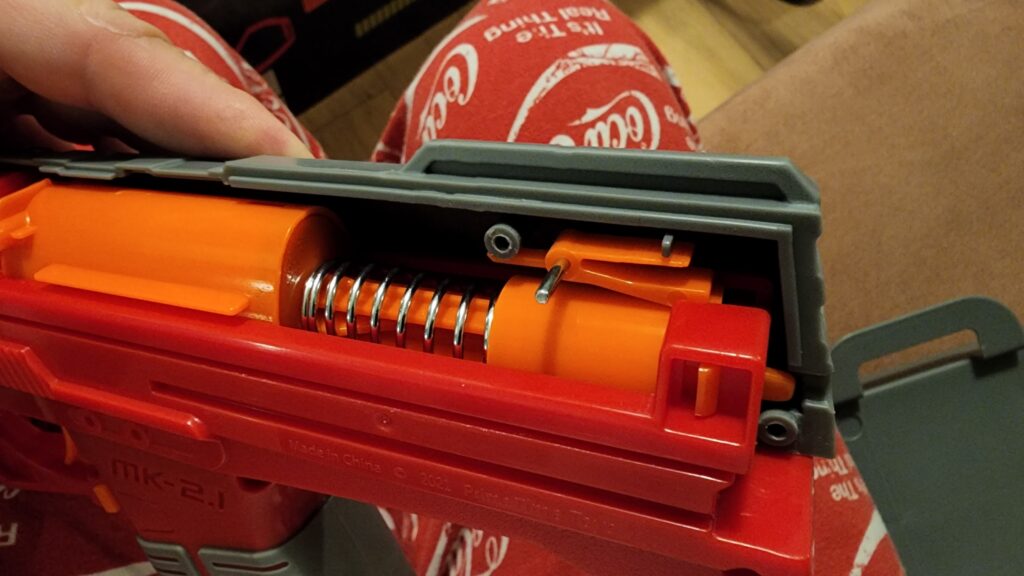 With the included (and lighter) Bamboo 2.0 darts, the Mk2.1 averaged 162fps. That’s nothing to sneeze at. Other short darts like AF Pro and Dart Zone Max averaged around 141fps. Given their greater mass (and thus inertia), though, they seem to work just as well for combat and are just as accurate at these speeds.

The rate of fire is somewhat slow – there’s no slamfire, and it is possible to move so fast that the slide hangs up (due to the priming lock). Even so, once you figure out the rhythm to priming the blaster, a rate of two darts per second is quite possible. And with the move from reloading clips to magazines, you can keep up that rate of fire for much longer.

Of course, here is some gameplay footage.

If you’ve already seen the inside of an Mk2, then this won’t be any surprise. 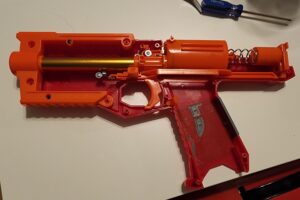 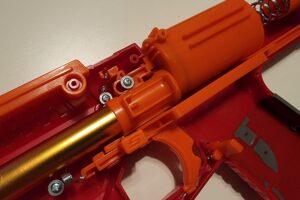 The features are all largely the same, from the oval plunger tube to the trigger linkage going around the magazine well. However, the installed spring does seem a bit stronger, and the longer barrel further explains the increase in fps. That magazine eject button is still tiny, though…

The Mk2.1 is nice to use, and while the magazine eject button is quite annoying, it’s overshadowed by the rest of the blaster’s qualities. Does the update justify the extra $20 over the original? Maybe, maybe not. I know lots of players who are either fond of the compactness of the original or don’t see it as enough of an improvement to drop $100 for the update. If you do get it, though, I think you’ll be pleased. Especially since four packs of spare magazines are $17, which is quite reasonable.