I was excited for the Deuce Pro. It’s a neat concept, having a pro revolver with both swappable cylinders and barrel options for higher and lower fps gameplay. $40 for a blaster, three cylinders, and a molded holster and gear seemed like a steal. So when a friend found them a few days before Endwar, I jumped at the opportunity to pick up one of them from him for use during Endwar.

At that point, during the mission, I realized Dart Zone didn’t quite stick the landing.

A Barrel That Does Something? 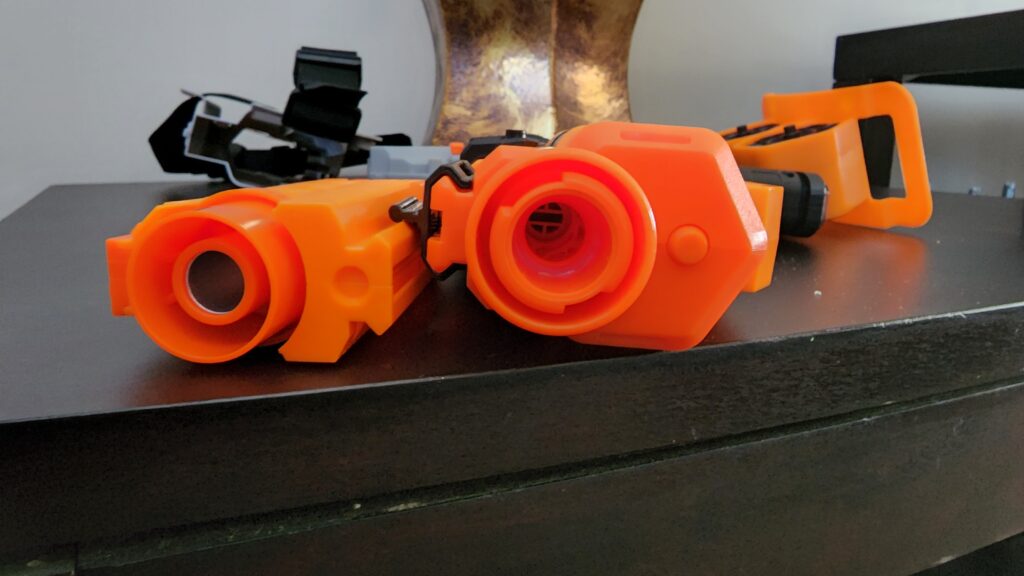 Yep, that’s right. The extended barrel that you can attach to the blaster really does increase ranges. There’s a small bit of plastic barrel at the front of the blaster itself; that short section is enough to make the Deuce Pro HvZ legal in most games. However, the attachment point also features a gasket for maintaining a seal when the front barrel is installed. This front piece has a metal barrel extension, and the entire system put together lets you hit those “Pro” ranges it claims on the box. It’s a creative and effective solution to making a Pro blaster that can do multiple levels of play.

The Deuce Pro is extremely comfortable to wield, with a slide you can grip easily for the stiff prime and a large handle. There’s a trigger safety below the actual firing trigger that must be depressed when you want to fire. While I’m sure modders out there will be quick to remove it, I found it still quite natural to use and I had no issues with the safety whatsoever.

The loading system is interesting; the blaster still uses a traditional pusher mechanism to load a dart forward into the barrel. Instead of magazines, though, you have six-shot cylinders. The ammo slots hold darts in place decently well (I had no issues with new and lightly used darts falling out), and tabs within the structure helps hold the darts in place while still allowing enough space for the pusher to go all the way through. One disadvantage is that swapping cylinders can be a bit awkward. You have to prime the blaster, then with the slide in the rear position, push the cylinder out the left side of the blaster. It does take more force than you’d expect, but erring on the side of keeping the blaster pieces together is a good thing, in my opinion. If the opportunity arises, there is a loading port for inserting darts into your current cylinder.

The Deuce Pro package comes with more than the blaster, though. There’s a front sight, three cylinders total (one is already loaded into the blaster), a belt holder for two of the cylinders, and a simple, molded leg holster. The holster has an extra piece that snaps in place for holding the barrel attachment separately. If you don’t care about that bit, though, the main body holds the blaster, whether the front barrel is attached or not. In that way, it’s a bit better than the Dart Zone Pro Mk2 line, where the holster doesn’t let you do that. The blaster has a friction fit to the holster, but that’s more than enough to keep it in place unless you’re really trying to make it come loose.

You have two levels of performance, depending on whether the barrel extension is attached. Without it, the included short darts averaged 99fps – that’s nothing to sneeze at, and it makes the blaster HvZ legal. With the extension, however, that jumps to an average of 143fps. Having an actual barrel to harness all that power makes a difference!

The rate of fire is limited to around two darts per second. Again, that’s not bad for a spring-powered pistol. In this case, you have to take the time to fully prime the blaster, rotate the cylinder, then return the pusher through the cylinder, so you can’t really skip any steps.

There is one problem, though, outside of the power and rate of fire. In stock form, the Deuce Pro has a tendency to not index correctly. Due to the way the blaster is made, the cylinder rotation occurs at the very end of the priming rotation – after the plunger catch has engaged. This makes it possible to prime the blaster without rotating the cylinder. At the same time, rapid priming can also result in the cylinder rotating, but also skipping a barrel. This can cause problems later when you fire six shots; the latter ones won’t actually load any darts for firing. Using the blaster in HvZ added to the suspense, and not in a good way. There were lots of shots where, both visually and audibly, you could tell a dart wasn’t being fired. That’s NOT ideal, and it severely diminishes the usefulness of such a blaster.

There is a fix for the Deuce Pro. Well, a partial one, anyway. 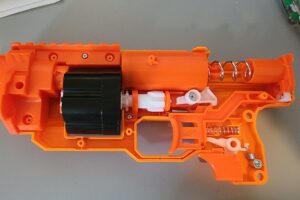 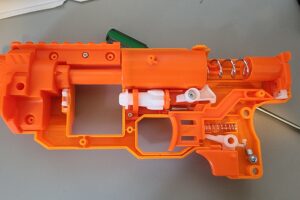 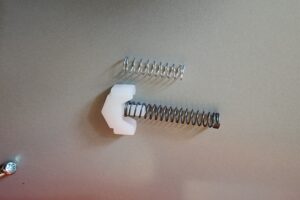 When you open up the blaster and unscrew the rotation mechanism, you’ll find a white plastic indexing piece with a spring underneath it. The spring under here is too weak, and needs replaced. The solution appears to be replacing the spring with one from a retractable ballpoint pen. However, not all pens are the same, so you might not have a compatible spring handy. Another issue is the length and strength of the replacement spring. Too strong, and you’ll actually end up skipping barrels every time (with the extra force needed to turn the cylinder, rotational inertia takes over). So you may have to take your spring and cut it down in order to find the sweet spot. Even then…it’s not a guaranteed fix. Mine works fine now, but others have reported still having issues.

You shouldn’t have to fix a blaster, especially a “performance” one.

The Deuce Pro has a lot of things going for it. Having a high-performance blaster not fed with a magazine is exciting, and brings fun options to the table for players of all stripes. But you have to be able to rely on a blaster to fire a dart every time you prime it and pull the trigger. Even at $40, that’s a terrible deficiency to have. Hopefully, Dart Zone can fix this in production quickly. But for the moment, it’s a blaster that you might like if you’re willing to tinker, and probably won’t like if you don’t.